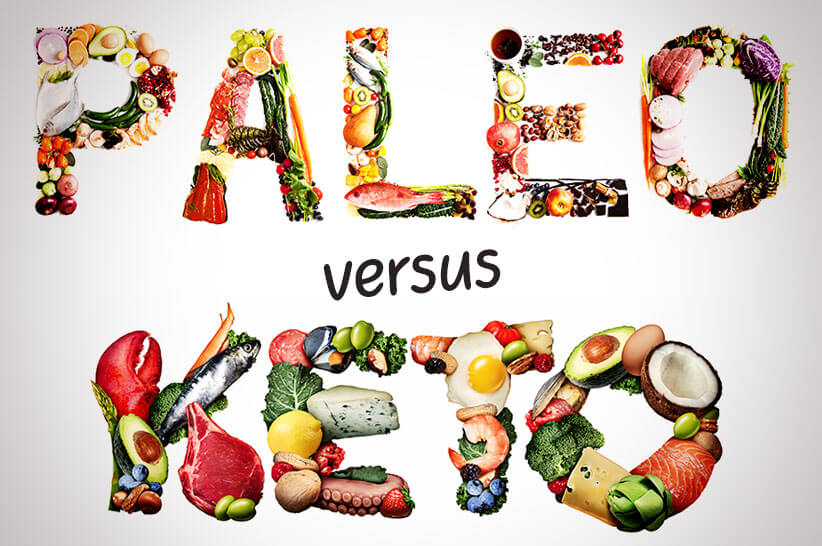 These two have so many things in common, some believe paleo and keto are practically the same diet. But that couldn’t be further from the truth.

Two rival diets that have dominated the past decade are paleo and keto. With their focus on whole foods, animal protein, and the exclusion of grains and legumes, they look similar at first. But when you get to know them better, you’ll see that keto and paleo have just as many differences.

If you’re thinking about starting one or the other, you’ll need to know more about each one. You’re likely also dying to know which is better: paleo or keto and in what way?

Below is a comprehensive comparison of keto and paleo. We talk about what each diet is about, their histories, and their goals. We also offer tips on choosing between the two and the possibility of combining both approaches to get the best of both worlds.

What Is the Paleo Diet?

The Paleolithic (paleo) diet, also known as the caveman diet or stone-age diet, is a way of eating based on foods that people supposedly ate in the Stone Age era that ended some 12,000 years ago. Examples of foods that followers of this diet eat include:

On the other hand, paleo followers will typically avoid:

However, proponents frequently disagree on what food is paleo. For example, some consider potatoes unpaleo, while others don’t mind enjoying them as a side dish to their game meat and other paleo favorites. Anthropologists also claim that the diets of our ancestors were likely more plant-based than we think and that they ate barley and legumes 2, which contradicts some popular paleo claims. Nonetheless, the paleo diet has many advantages and benefits (more on that later). Nonetheless, what’s sure is that paleo’s focus is on minimally processed foods.

So, how did the concept of paleo eating come about?

In 1975, Dr. Walter L. Voegtlin, a gastroenterologist, published, Stone Age Diet: Based on In-Depth Studies on Human Ecology and the Diet of Man 1, which was the first time the concept of eating like cavemen was introduced. But it was in 2002 with the publishing of, The Paleo Diet: Lose Weight and Get Healthy by Eating the Foods You Were Designed to Eat by Loren Cordain that paleo’s popularity skyrocketed 2.

And what is the argument for eating this way?

A 1985 article published in the New England Journal of Medicine explains that 12,000 years of evolutions is too little time for us to adapt to the huge dietary changes brought about by agriculture and industrialization 3. In other words, we are genetically programmed to eat like our ancestors. Our modern diet is simply not compatible with our genetic makeup, leading to an ongoing rise in obesity, diabetes, cardiovascular diseases, and cancer rates.

As far as health benefits go, the paleo diet can provide the following 2, 4:

Most of these benefits likely come from the balanced composition of the diet: rich in satiating protein, glucose-balancing fiber, nutritious veggies, healthy fats from nuts and seeds, and the exclusion of highly-processed empty calories. The quality of the food people eat on paleo is likely another contributing factor.

Some examples of paleo recipes:

What Is the Keto Diet?

The ketogenic (keto) diet is a low-carb, high-fat, moderate-protein diet. It was originally designed as an epilepsy treatment in the 1920s 5. However, in the past couple of years, many have started using keto to lose weight or improve blood sugar levels.

The main goal of the keto diet is ketosis, a metabolic state different from your usual metabolic state of glycolysis. During glycolysis, your cells burn glucose to make energy; but during ketosis, they burn fat to make ketones 6. In other words, your body switches from burning sugar to mainly burning fat, to put it simply.

And while ketosis is different from your usual state of sugar burning, it is completely natural. Our bodies are in a mild state of ketosis after an overnight fast or after we skip meals 6. Ketosis was designed to help us survive times of starvation and food scarcity, and there are even health advantages to it.

But how does keto manage to put us in this metabolic state?

The researchers that first designed the keto diet noticed that restricting carbs does the same as fasting – put the body in ketosis. Carb restriction needs to be drastic for this to happen, though, while fat becomes the main source of fuel (and ketones). In general, the ketogenic diet’s main focus is on macronutrient distribution:

The best way to achieve this macronutrient ratio is to limit certain foods while basing your meals around others. For example, keto diet staples often include:

On the other hand, you are more likely to limit your carb intake by avoiding the following foods:

Researchers have extensively studied the keto diet since the 1920s, and many have found that it provides benefits beyond seizure control. According to a 2014 review article, there is strong evidence keto can help with 7:

Keto is also promising for:

Some examples of keto recipes:

Similarities Between the Paleo and Keto Diet

Maybe you’ve noticed that the paleo diet and keto are often mentioned in the same context. That’s because they have a lot in common, and here’s what they share:

The paleo diet is based on whole foods, while most keto proponents will tell you that whole foods are best. Grass-fed meat, vegetables, nuts, seeds, and unrefined oils are staples of both diets.

Exclusion of grains and legumes

Grains such as wheat, barley, oats, and rice are not eaten on either diet. Similarly, beans, peas, chickpeas, and lentils are also a no-no. However, the reasons for their exclusion differ between the diets. Keto excludes grains and legumes because they are high in carbs. Paleo, on the other hand, excludes them because they’re not considered part of Paleolithic nutrition.

Non-starchy veggies get a thumbs up

Both diets allow for non-starchy veggies like broccoli, cauliflower, parsley, kale, asparagus, and tomatoes, for example. The keto diet allows them because they’re low in carbs and a great source of fiber, vitamins, minerals, and antioxidants 8. These veggies are also considered compatible with our genes on paleo.

The keto diet is by definition a low-carb diet. Paleo is not purposefully low in carbs, but it ends up being that way because grains, legumes, and added sugar are excluded. This is also the main reason both eating plans are great for glycemic control and weight loss.

Animal foods are major sources of protein on paleo and keto. Red meat, pork, poultry, fish, and eggs are some important sources of essential amino acids on both diets. However, paleo emphasizes lean meats, while keto dieters aim for fattier cuts.

Nuts and seeds as healthy

Nuts and seeds provide plant protein as well as fiber, healthy fats, and other nutrients 9. Products made from nuts and seeds like peanut butter, almond flour, tahini, and coconut flour are important staples and ingredient replacements on both diets.

Differences Between the Paleo and Keto Diet

As said, there are as many (if not more) differences between paleo vs low-carb and keto diets as there are similarities. Knowing these differences can help you understand the purpose of each diet better, and make your choice easier. So what is the difference between keto and paleo?

The main difference between paleo and keto is where their focus lies. The quality of food and how it is compatible with our genetics is what matters on paleo. On keto, it’s the macronutrient distribution of meals that’s most important.

Another important difference has to do with ketosis.

Does paleo put you in ketosis? Not really. But ketosis is what you’ll likely be in if you follow the keto diet correctly. In fact, you absolutely need to reach ketosis for the ketogenic diet to help with weight loss and glycemic control. The paleo diet does not require this since its mechanisms of action are different.

The paleo and keto diet also differ in which foods are allowed or best to avoid. Milk, cheese, and yogurt came with agriculture and farming, and that’s why you won’t see dairy on a paleo diet. But on keto, dairy is a staple item. Butter, sour cream, aged cheese, and other high-fat products are best. Milk is a bit higher in sugar (lactose), so most keto dieters avoid it.

There are even differences in how dieters sweeten their meals on paleo vs keto. Honey, maple syrup, and agave syrup are examples of sweeteners you can use on a paleo eating plan. But on keto, you should only go for non-nutritive or low-carb sweeteners like stevia, erythritol, xylitol, and similar.

Which Diet Is Right for You?

You now know about the major differences and commonalities of keto vs paleo. But how do you choose between the two?

The keto diet is lauded for its ability to burn fat and shed weight, which could mean this approach is better if you want to lose a lot of weight.

But can you lose weight on paleo? And what about paleo vs keto for inflammation or keto vs paleo for bodybuilding? Both the keto diet and paleo can offer similar benefits. One systematic review and meta-analysis found that paleo worked against metabolic syndrome, and with it excess weight 10.

However, losing weight will probably be easier for you on a keto diet if you’ve had problems with appetite and portion control in the past. Ketogenic diets suppress appetite, and this is directly the effect of ketones 11. They also affect your metabolism in a way not seen with other diets. But paleo may be better as a long-term strategy that’s easier to follow.

The paleo diet can be better if you’re an athlete or bodybuilder since it is higher in protein and allows for more carbs. Both diets can reduce inflammation thanks to their favorable effects on insulin and the quality of nutrition they provide 12, 13.

Here a couple of other points to consider when making your picks:

Can You Do Paleo and Keto at the Same Time?

Still can’t decide? Why not have the best of both worlds, right?

Some people follow what’s known as the “paleolithic ketogenic diet.” It’s essentially a keto diet with some paleo features, like focus on healthy oils, unprocessed foods, and above-ground veggies. On this approach, you should go for quality cuts of grass-fed meat and eat pasture-raised eggs. Eat as many nuts and seeds as you like and avoid dairy since it’s not paleo.

All in all, both paleo and keto have a host of benefits to offer. Both can help you lose weight and improve overall health. Both diets can help you eat more nutrient-dense and unprocessed foods. Where they differ is in the details: keto puts you in ketosis, paleo not; keto strongly suppresses appetite, paleo less, and keto requires detailed work, while you don’t have to sweat it with paleo.