Home → Articles → Ketones vs Glucose: Which Is A Better Fuel for Your Brain? 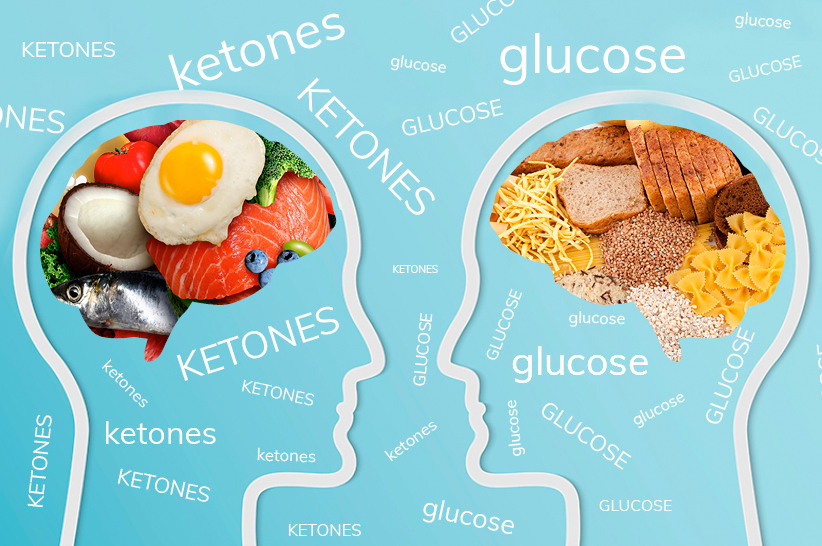 Your brain thrives on glucose to perform its essential functions. But are ketones better? Find out how ketones help the brain in today’s guide. We’ll do a side by side comparison between ketones vs glucose.

Your brain is one of the most interesting and complex organs of your body. Responsible for many functions, it helps you to process sensory information, learn new things, move, and feel 1. To operate, the brain uses glucose, its primary source of energy. But what about when you switch to a low-carb, ketogenic diet? In today’s post, we’ll explore ketones vs glucose and try to understand which of the two serves as a better fuel for your brain cells.

Before we dive into the definition of ketones in relation to the ketogenic diet, let’s talk about our Western diet. This diet is laden with foods that are rich in sugar. Isn’t it that sugar makes foods taste better?

If you eat a whole bunch of sugar and it exceeds your glycogen storage capacity, your body converts and stores it as fat. This will explain why you gain weight.

Sugar isn’t all bad for your health. In fact, the brain prefers sugar as its main fuel, and it consumes around 120 grams daily 2.

However, during times of starvation, prolonged fasting, or when a person follows a ketogenic diet for the first time, liver glycogen becomes depleted. In that case, the mitochondria of your liver cells produce ketones from essential fatty acids or your body’s stored fat. This process is called ketogenesis.

Ketones are considered as an alternative fuel for the brain and other vital tissues of your body (such as your heart and skeletal muscle) when glucose supply runs short 3. Our ancestors would not have thrived despite having limited access to food if it weren’t for this alternative energy source called ketones.

Another thing you should know about ketones is that they come in three types, namely:

Acetone is the least abundant type of ketone body. It makes up 2% of the ketones in your bloodstream. It results from the breakdown of acetoacetate and is more abundant in the breath. A study showed that acetone which is elevated in the ketogenic diet suppresses seizures in patients with drug-resistant epilepsy 7.

Glucose is the main sugar in your blood. Carbohydrates from the food you eat become converted into glucose.

Glucose is essential in that it provides your organs with energy that they can immediately utilize. It allows you to perform intense workouts, acts as a raw material so your body can produce other molecules (for example, collagen), and serves as brain fuel.

Other names for glucose include dextrose, starch, or glycogen:

Dextrose is a simple sugar that comes from corn or other plants. It’s commonly found in foods such as honey, packaged goods, desserts, and corn syrup. At hospitals or medical facilities, dextrose is being used as intravenous preparations.

Starch is a complex type of carbohydrate as it is formed by large glucose units that join through glycosylic bonds. We often consume starch by eating staple foods like rice, white flour, oats, pasta, corn, potatoes, and bread products.

Glycogen acts as the primary storage form of glucose. Whenever your body needs energy, glycogen breaks down into glucose. Your liver releases glycogen in response to stressful situations, low blood sugar, and to aid digestion 8.

As you can see, glucose plays many roles. But what are reasons to use ketones for the brain as an alternative to glucose when it’s clear that glucose is essential for many bodily functions? We answer this in the following sections.

Can the Brain Use Ketones for Energy?

Short answer: Yes. While we recognize glucose as the principal energy source of the brain, amazingly, the brain also uses ketones, primarily beta-hydroxybutyrate and acetoacetate as a backup fuel.

In fact, during sleep, you enter a fasted state which allows your body to tap into its glycogen stores. When glycogen stores are low, your body metabolizes your stored fat which gets converted into fatty acids. Fatty acids break down into ketones that cross your blood-brain barrier.

A study showed that increasing your ketone levels through a very high-fat, low-carbohydrate ketogenic diet may benefit patients with brain diseases such as Alzheimer’s and intractable epilepsy 9.

Ketones vs Glucose: Which Is A Better Fuel for Your Brain?

In this section, we’ll explore the advantages and disadvantages of using ketones and glucose as brain fuel. That way, we can tell which one is better.

Let’s start with ketones. Why would you follow the keto diet for brain health? Why do some people avoid it?

The brain is considered to be the fattiest organ of your body – it’s almost 60% fat. Having said this, it makes sense to supply your brain with fatty acids so it can perform its necessary functions. Since your body cannot produce fatty acids on its own, you need to get them from your diet. Essential fatty acids include omega-3 fatty acids and omega-6 fatty acids .

Studies have shown that mothers who were given essential fatty acids gave birth to infants who had better mental processing and psychomotor development 11.

Hypoglycemia or low blood sugar is common in diabetic patients. Take note that the normal range for blood glucose is between 3.9 and 7.1 mmol/L (70 to 130 mg/dL). Hypoglycemia hinders brain function. Severe hypoglycemia leads to the death of vulnerable neurons 12. Brain injury that results from hypoglycemia usually happens among diabetic patients who attempt tight glucose control 13.

A study examined postnatal rat pups. The researchers gave some of these rats a standard diet while they fed the others with a ketogenic diet. After five days, they induced hypoglycemia through insulin injection. They found out that the rats that received the keto diet showed fewer symptoms 14.

Brain trauma or traumatic brain injury (TBI) is caused by a strong blow to the head that damages the brain tissue. TBI causes include falls, vehicular accidents, sports injuries, and explosive blasts during military duty. Regardless of the cause, brain trauma leads to anxiety, depression, loss of coordination, coma, and seizures 15.

Using a ketogenic diet on TBI patients offers an alternative fuel to the brain in the form of ketones. Rodents that sustained TBI had improved cerebral metabolism and behavior after eating a keto diet. The result suggested that the keto diet shows potential in humans 17.

1. You experience side effects during keto-adaptation

As your body adapts to a keto diet, you experience symptoms collectively known as the keto flu. These symptoms include headaches, lightheadedness, difficulty focusing, dizziness, and nausea. They happen as your brain withdraws from glucose as its main energy source and shifts to ketones for fuel.

Since carbohydrates retain water, losing them also means flushing out electrolytes such as sodium. Low sodium levels cause the symptoms mentioned earlier. Some people quit the keto diet because of these side effects. However, take note that they’re temporary and last from a few days to 3 weeks.

To lessen these symptoms, make sure that you stay hydrated, get proper sleep, and replenish lost electrolytes.

Here’s more evidence to show that glucose is essential to the brain and how consuming it in excess is bad.

Your brain consumes 10.8 calories in one hour just to perform its tasks. That’s how energy-hungry the brain is.

The more challenging the mental task is, the more glucose it requires. Usually, such tasks are those that you may not be very good at and therefore require you to really think. Scientists suggest that eating sugary foods should improve performance of these tasks 18

Considering conventional knowledge, we can say that glucose helps us refocus when we feel depleted. For example, during a break between exams, having a sugary drink puts us back into action.

One study examined 60 six and seven-year-old children. As the end of the school day approached, they were given a drink. That drink contained either 25 grams of glucose or a placebo. Results showed that those who had the glucose-filled drink were able to sustain their attention for longer 19.

Sugar is such a controversial topic. It’s on the list of factors that possibly contribute to depression.

If you don’t know what BDNF is, it’s a protein that maintains and promotes the growth of your neurons. Brains of patients who are depressed show a decreased activity of BDNF. This could explain the link between high sugar intake and depression 20.

2. Sugar triggers the reward centers of the brain linked to addiction

A 2018 research explored the influence of sugar on obesity, a medical condition that affects millions of people worldwide. It’s no secret that sugar is found in the highly processed, inexpensive, and convenient foods we eat. But how does sugar contribute to obesity?

Sugar is an addictive substance as it boosts the reward circuit of your brain that’s linked to addiction. In effect, you always want to experience the pleasure of eating sugar. It becomes a habit.

Ketones vs glucose… which one fuels your brain better?

Based on the studies above, ketones make a better fuel source. In fact, beta-hydroxybutyrate, the most abundant ketone body, act as a more efficient fuel than glucose. More research also reveals that ketones can benefit the brains of people with Alzheimer’s, intractable epilepsy, and traumatic brain injury.

While the brain runs on glucose, it uses ketones as an alternative whenever there’s glucose shortage. If you’re wondering whether making the switch from glucose to ketones as brain fuel is worth it, consider the points we discussed above.

Glucose is essential and that’s definitely true. However, too much glucose in the blood does more harm than good. We live in an age that embraces convenience, and with that, most of our convenient food options contain loads of sugar. Sugar is associated with health problems like depression and obesity.

If you plan to start a keto diet for brain health, be sure to consult with your doctor first.