Home → Articles → The Impact of Ketogenic Diet in Cancer 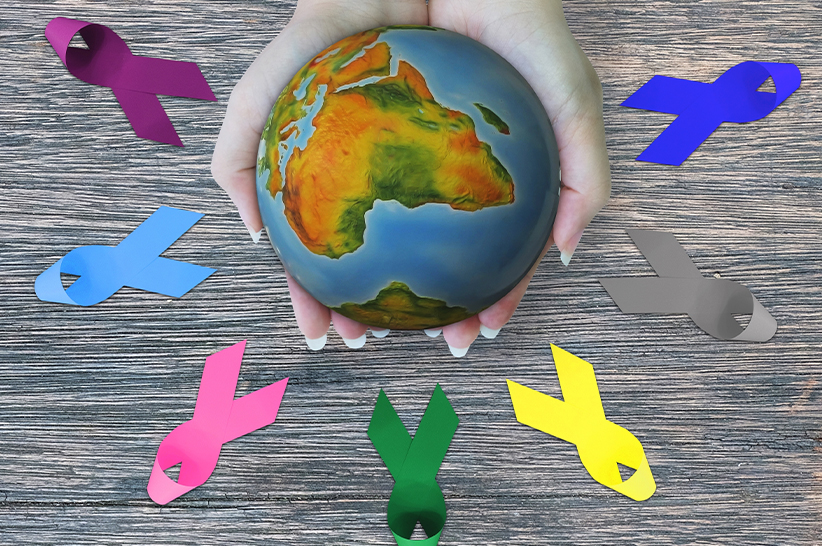 Despite continuous advancements in the medical industry, it is estimated that in 2019 cancer’s morbidity rate is still increasing, with a slight drop in mortality. This means that although the number of deaths is going down slightly the number of people suffering from cancer is still going up.

IMPORTANT: You should never delay or try to replace professional cancer treatments with adjuvant methods such as the ketogenic diet. And you should also discuss everything with a medical professional before doing it.

What Is the Ketogenic Diet?

The ketogenic diet is a low carb diet with high fat and moderate protein content which means roughly 60-75% of your diet will consist of healthy fats, 20% protein, and 5% or fewer carbs. Although many proven health benefits of this diet have been researched and studied over the decades, Dr. Russell Wilder initially developed the keto diet to treat epilepsy in 1921 3.

Research states that fasting has been used as a powerful treatment for epilepsy since 500 BC. However, this approach may not be easy or suitable for young children and those with certain health conditions. Hence, Dr. Wilder came up with the ketogenic diet to mimic the mechanism of fasting and treat epilepsy in children. In many cases, this diet was proven to be more effective than the anticonvulsant drugs available at that time.

One such example is the case of Charlie Abrahams, son of Hollywood producer Jim Abrahams. In 1993, Charlie was a 2 year-old toddler who suffered from daily uncontrollable drop seizures, despite undergoing a multitude of professional medical treatments.

According to his father Abraham, Charlie had numerous failed drug trials, dozens of blood draws, tests and treatments, including fruitless brain surgery. This was all before he discovered the ketogenic diet from a book (Seizures and Epilepsy: A Guide for Parents) 4.

Soon after, Charlie was brought to John Hopkins Hospital, and he was made to fast and undergo a medically supervised ketogenic diet. Charlie’s seizures disappeared within several days, and he’s been seizure free ever since. Frustrated that he was not told about the ketogenic diet sooner, Jim started the Charlie Foundation that same year to help treat pediatric epilepsy 5. Ever since, the ketogenic diet has been studied extensively for its various other health benefits and has been steadily rising in popularity.

How Does a Ketogenic Diet Work?

In 1921, Dr. Woodyatt noted that acetone and beta-hydroxybutyric acid (ketones) appeared in normal subjects by starvation or a low carb high-fat diet. The presence of an abnormally high concentration of ketone bodies in the blood is called ketonemia. Dr. Wilder wanted to find another way to create the fasting mechanism (ketonemia), and then he came up with the ketogenic diet.

Your body uses carbohydrate as its primary fuel source to produce energy. When you start lowering your carb intake to less than 50 grams per day, the insulin production decreases and the body enters a catabolic state. First, it uses up glycogen (stored carbohydrates) and then enters a metabolic process known as gluconeogenesis.

Gluconeogenesis is the process by which glucose is produced inside the body (endogenous production), primarily in the liver 6. This is how the body initially produces glucose for energy during prolonged fasting.

Gluconeogenesis becomes insufficient to fulfill the body’s needs when glucose level continues to decline. That’s when ketogenesis begins to work as an alternate fuel source in the form of ketone bodies 3.

At this stage, the low level of insulin production, due to low glucose, reduces the stimulus for the storage of glucose and fats. Fats are then broken down into fatty acids to be metabolized to acetoacetate which is then converted into ketones (acetone and beta-hydroxybutyrate). The body uses these ketones as its primary fuel source.

The ketogenic diet causes the body to go through all of the above three processes which results in the production of ketone bodies in small and safe quantities. The diet-induced production of ketones is known as ketosis, and it’s considered to be safe, as it does not affect the blood pH. It’s also significantly different from ketoacidosis where dangerously high amounts of ketones are present in the blood.

Ketone bodies have been found to be easily utilized by the body’s organs including the heart, muscle tissue, brain, and kidneys. They’ve also been found to produce more ATP for energy than glucose. 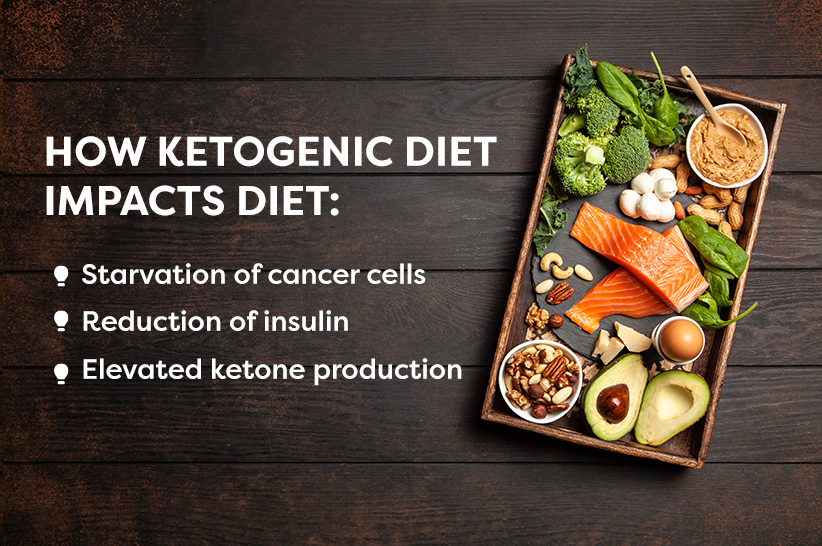 The Impact of Ketogenic Diet on Cancer

Research states that one of the most prominent and universal alterations seen in cancer cells is the significant increase in glycolytic metabolism. This is the pathway that the body uses to convert glucose into pyruvate for energy. What this means is that cancer cells, like the normal body cells, are also feeding on glucose to grow and multiply.

With this in mind, researchers have proposed a hypothesis with supporting evidence that the ketogenic diet will force cancer cells to use a mitochondrial oxidative mechanism which in turn would cause metabolic oxidative stress in cancer cells (not in the normal cells) 7.

Another way that the keto diet is thought to play a role in cancer is by reducing insulin production. Low level of glucose in the blood also means a low level of insulin production and insulin is a growth hormone that even the cancer cells use to multiply. Normal cells would adapt to using ketones, so they don’t require the help of insulin, but that’s not the case with some cancer cells 8.

Some cancer cells have been found to have mitochondrial dysfunction and down-regulation of enzymes. Thus, they cannot utilize ketone bodies for fuel like normal cells 9. Therefore, the combined theory is that low glucose level and ketosis from the ketogenic diet would starve cancer cells of energy, unlike normal cells that will continue to adapt and survive.

The anti-cancer properties of the keto diet have been studied for over 60 years, mainly in a lot of animal studies. The majority of studies conducted on animals show that the ketogenic diet can be effective at reducing cancer growth and improving survival rate.

Let’s look at some studies on the effect of keto diet on cancer cells and what they’ve found.

A 2010 study reported the first case of a brain cancer patient who was treated with a ketogenic diet. The patient was a 65-year-old woman who presented symptoms such as chronic headaches, nausea, progressive memory loss, and more. She was diagnosed with glioblastoma (brain tumor) 10.

After two months of treatment, they found that she had a 20% reduction in weight and the FDG-PET and MRI could not detect any visible brain tumor tissue. However, tumor growth was seen within weeks after returning to the regular diet.

In a 1995 study conducted in the University Hospitals of Cleveland, two female pediatric patients with advanced stage brain cancer underwent the ketogenic diet treatment along with the standard therapy 11. They were followed as outpatients for 8 weeks and were administered the ketogenic diet consisting of 60% medium chain triglyceride oil-based diet.

Within seven days of starting, their blood glucose returned to normal, and ketones multiplied to 20-30 fold. PET scans of both patients showed a 21.8% reduction in glucose uptake at the tumor site. One of them also saw significant improvement in mood and quality of life. She continued the keto diet for an additional 12 months and remained free of tumor progression.

The results showed a decrease in tumor weight in the ketogenic formula group. They also saw a significant suppression of systemic inflammatory response and muscle loss.

A 2017 systematic review of animal studies, conducted to find the effectiveness of the ketogenic diet for cancer, found that the ketogenic diet can potentially inhibit the growth of cancer cells and increase survival time 14. The cancer types they studied included brain, pancreatic, prostate, gastric, colon, neuroblastoma, and lung cancer.

In 2015, a review study was conducted on 32 glioma (brain and spinal related cancers) patients who underwent the ketogenic diet as an adjuvant cancer therapy 15. They found out that the keto diet may control some types of glioma progression without any significant side effects.

A 2008 study found that mice who were fed a no-carbohydrate ketogenic diet had a significant reduction in tumor growth and improved survival rate compared to the western diet group 16.

Dr. Adrienne Scheck: Based on our research I think using the KD in combination with other therapies is the best “bang for the buck”.

Is the keto diet used as a single approach or is it used in combination with other cancer treatment? (chemo, radiation, surgical, etc)

Dr. Adrienne Scheck: Depends on who is doing it, and who you ask. Personally I would not use it as a monotherapy if I (or any of my family or friends) was the patient, but I would definitely use it as an adjunct therapy. There are some people that do not want to do standard of care so they may use it alone.

What types of cancers respond well to the keto diet based on your research?

Was there any successful case or test where the cancer was effectively controlled by the keto diet?

Dr. Thomas Seyfried: There are many cancer patients that are using the KD to manage their cancer. Our published paper showed this for a glioblastoma patient (doi: 10.3389/fnut.2018.00020). Unfortunately, the patient died after 30 months from what appeared to be radiation necrosis. Another patient has described his experience using KD to manage his glioblastoma (http://www.childhoodcancer2018.org.uk/speakers/pablo-kelly.asp). The patient is alive after 4 years. Allison Gannet and Andrew Scarborough are also using restricted KD to manage their brain cancers.