Home → Articles → Can You Eat Cheese on a Ketogenic Diet? 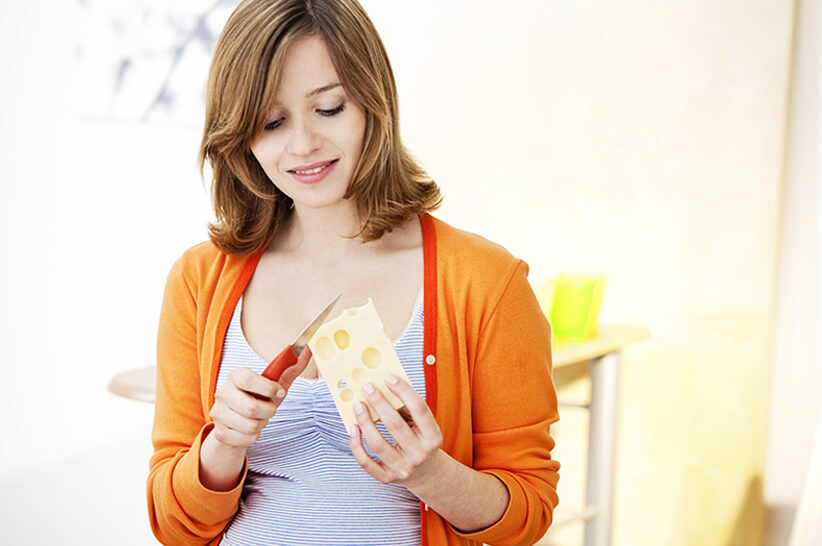 Cheese is a high-fat, low-carb staple on a keto diet. However, not all cheese is created equal. Find out which cheeses are best for your keto diet.

You probably heard that you should avoid milk on a keto diet because it’s relatively high in sugar. And since cheese is made from milk, you may also wonder whether you can eat cheese on keto.

As nutritionist Jason Hughes explains it:

“Although not all cheeses are created equal, they all contain high amounts of fats. Therefore, cheese qualifies to be keto.”

Let’s explain this in greater detail and see which cheese is best for your keto diet.

There are different types of cheese, from fresh and surface-ripened to aged, blue-veined, and brined. And different cheeses have different nutritional profiles; however, most cheese is keto-friendly.

In fact, it’s a keto staple for anyone who can tolerate dairy. Cheese is a great source of ketogenic fats and provides a decent amount of protein. Other valuable nutrients found in cheese include calcium, zinc, potassium, as well as vitamins A, D, and B complex 1.

Besides being nutritious, cheese on keto is a versatile ingredient. Many use it to make low-carb versions of pizza crusts, crackers, garlic bread, pancakes, waffles, and taco shells, to name a few.

But some cheese you should avoid on keto because it’s either high in carbs or processed. Luckily, these are a minority.

Another thing to keep in mind is that keto-friendly doesn’t mean you should overdo it. Cheese often contains around 300 cal in a 100g serving 1. Too many calories can hinder weight loss and even cause weight gain. “Not to mention, most people eat cheese that is poorly sourced from grain-fed cows,” explains holistic nutritionist Erik Abramowitz.

With that said, what cheeses can you eat on keto?

Below are 9 examples of cheeses to add to your weekly menu. All nutritional information is for 1 oz (28g) of cheese.

Two of the first questions most keto beginners ask is “what can you eat on a keto diet?” and “can you eat dairy on keto?”

While milk is too high in carbs to be keto-friendly, cheese is good enough on keto since it has a good balance of keto macros.

However, what you really want to know is which cheese is best.

Here are 9 types we believe tick all the right keto-friendly boxes: low-carb, high-fat, nutritious and healthy.

Goat cheese is any cheese made from goat’s milk, and it can be fresh, aged, and made into brie. Its nutritional content depends on the processing method; draining leads to loss of protein, while aging leads to an increase in B vitamins, for example 1.

It tops our list as the best cheese for keto for two reasons: its proteins are better tolerated by most people than those found in cow’s milk 2 and it has more short- and medium-chain fatty acids, like caproic, caprylic, and capric acids, than cow’s milk 2. These are notoriously good in supporting ketone production. 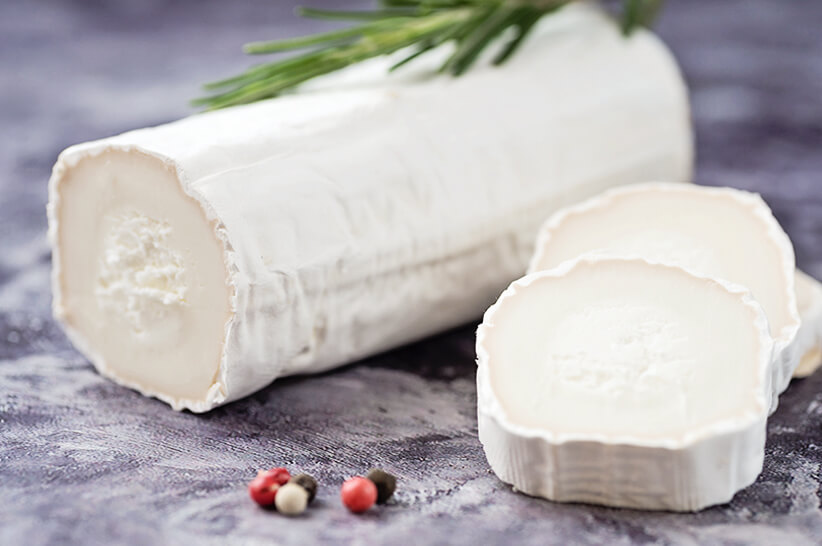 Goat cheese is a source of short- and medium-chain fats.

A popular spread and dessert ingredient, cream cheese owes its spreadability and creaminess to its high-fat content that usually hovers at around 33% 4. This feature also makes cream cheese brands like Philadelphia a popular keto diet staple.

It is a bit lower in protein than other cheeses and the carbs in cheese belonging to this group tend to be around 2g in 2 tbsp, which isn’t too much. Ways to eat it on keto include as a spread over low-carb bread, to thicken cream soups, to make cheesecake, in pancakes, and to make frosting. 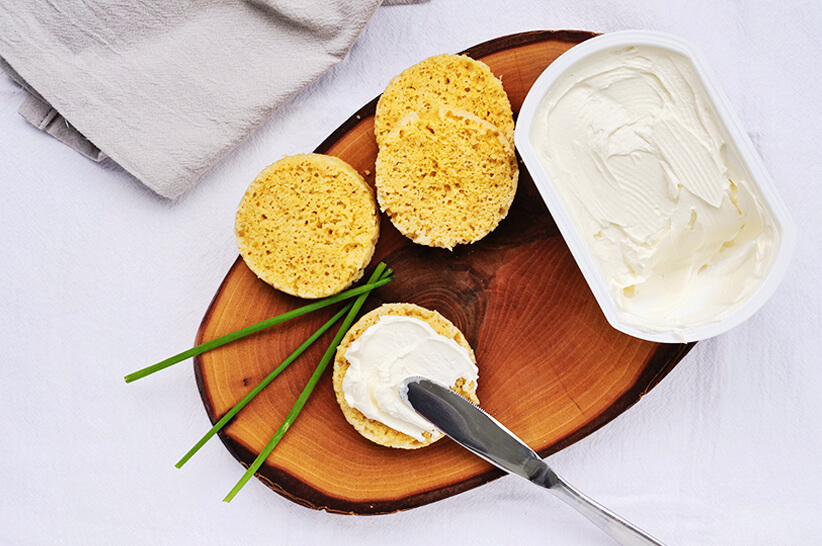 The blue “veins” in all types of blue cheese come from cultures of the Penicillium mold. These are added to different stages of cheese ripening and usually in a temperature-controlled environment. This is completely harmless and gives blue cheese its distinctly sharp and salty taste.

Blue cheese has a similar nutritional profile to many other types of aged cheese on keto, and that means it’s low-carb. It’s unique, sharp taste and low-carb content make it one of the best cheeses for keto diet food flavoring. A small amount will enhance the flavors of casseroles, soups, gratin, salads, and chicken recipes. 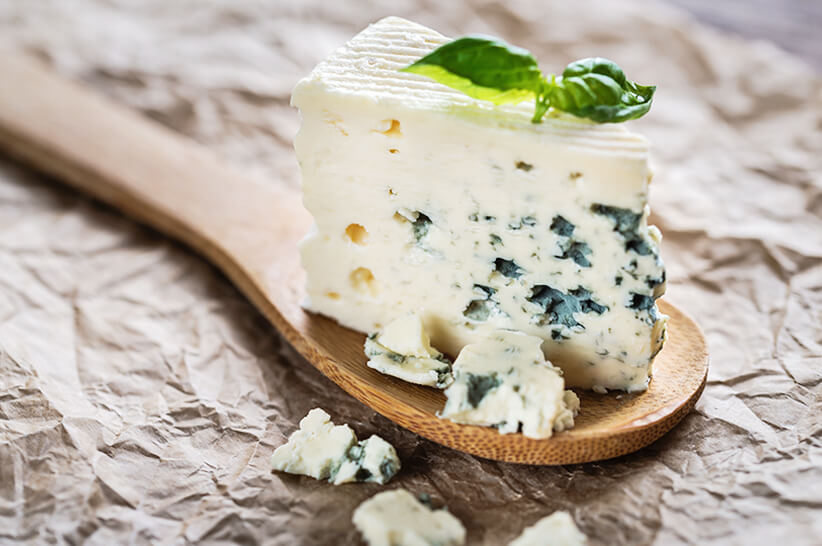 Blue cheese is a great flavoring for keto diet recipes.

Another cheese that adds flavor to meals, Parmesan also has a sharp and quite savory flavor with a fruity and nutty taste. It’s most popularly used grated over pasta, gratins, soups, and many Italian meals. Keto-ers also use it to make crispy snacks and taco shells.

Nutrition-wise, it is higher in protein than other hard cheeses. Protein helps increase feelings of fullness and is great for weight loss overall. Besides that, it’s a great source of several B vitamins, which you need for energy, as well as the minerals and electrolytes calcium and sodium. Go for imported brands like Zanetti and avoid buying pre-grated ones. 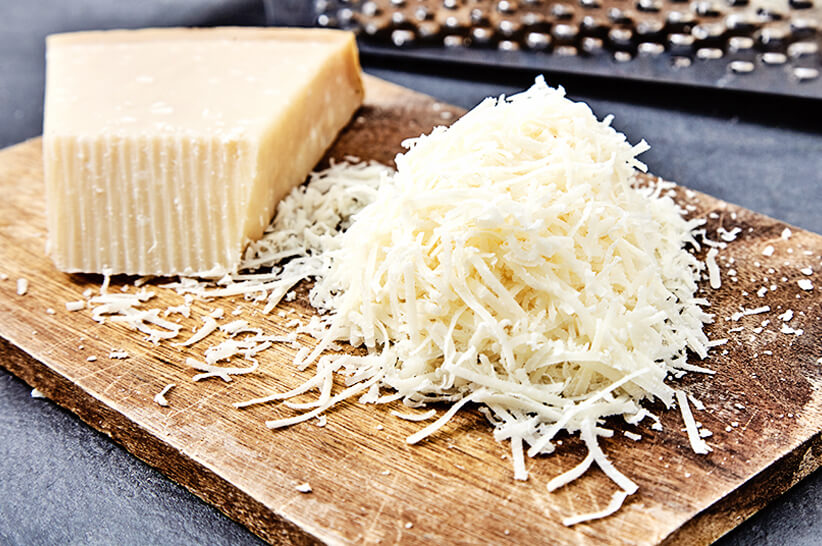 Make your keto meals taste even better with Parmesan.

Gruyere is a Swiss cheese with a sweet and nutty taste and creamy and melty texture. It comes in different aged profiles, with less mature ones being milder in taste. Traditionally, it’s used in French onion soup. You can also use this cheese on keto in ham sandwiches, quiches, or enjoy it as a snack.

Like most cheese, Gruyere is a good source of calcium but also selenium, an important antioxidant mineral. A special strain of lactic acid bacteria used in the production of Gruyere and many other cheese types produce short-chain amino acids, which provide health benefits like balancing gut flora and strengthening the immune system 7. 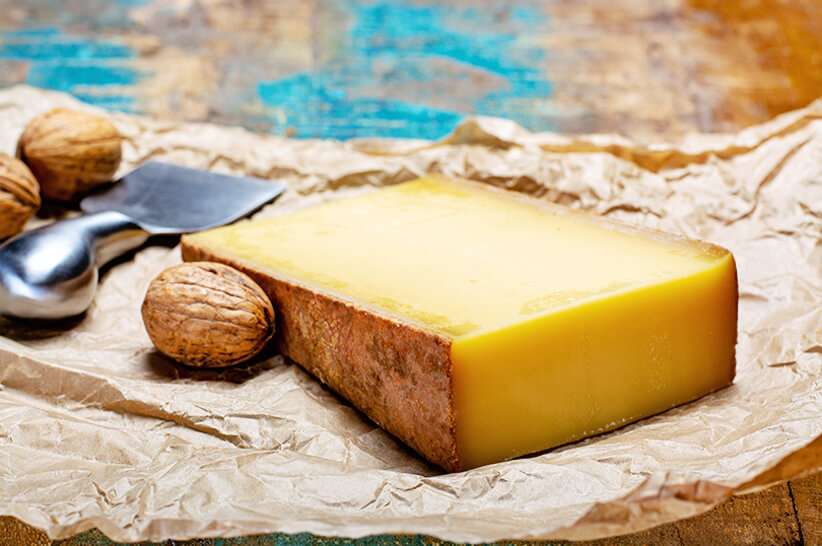 There are many ways to enjoy Gruyere on keto.

Brie is a soft-ripened French cheese, not to be confused with Camembert from brands like Le Rustique. It has an off-white rind of mold that has a strong and earthy aroma. Its center is soft and very creamy, more so than cream cheese. You’ll find brie that’s made from cow’s milk or goat’s milk. It’s a delicacy on its own, but you can also enjoy it melted or in low-carb sandwiches.

Brie is rich in calcium, sodium, magnesium, and potassium – important keto electrolytes. It’s generally safe if stored properly and consumed before its expiration date. But like other soft-ripened cheese, there’s a small risk of Listeria infection, which can be bad for pregnant women 9. 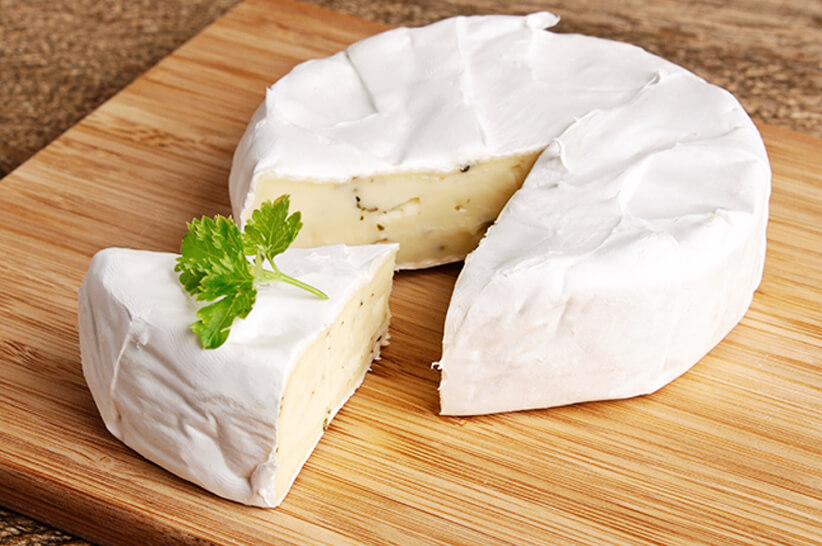 Get important keto electrolytes from brie.

There are two reasons to eat feta on keto: it’s often made with goat milk, which means it’s rich in medium-chain triglycerides and it’s high in sodium, an electrolyte you need more of on a keto diet. Feta is a brined curd cheese, thus the high sodium content. It’s made in Greece and is a popular addition to Greek salads and many other dishes.

Besides being a good source of sodium, feta is rich in calcium and riboflavin, a B vitamin important for the production of co-enzymes that regulate fat metabolism 11. And because feta is often made with goat’s milk, it may be easier to digest than other cheeses. 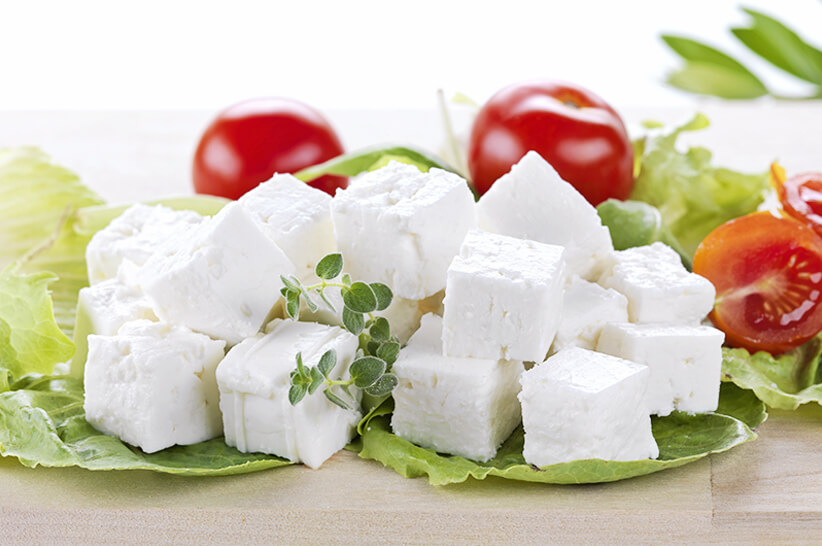 Feta tends to go heavy on the salt, a good thing for keto eaters.

Another grating cheese, Romano cheese can be made from cow’s, sheep’s, or goat’s milk. It’s quite similar to Parmesan and can be used in the same way. Romano cheese made with goat’s milk has a particularly sharp taste while the cow’s milk variety is mild in comparison. We suggest going for the former because it’s rich in medium-chain triglycerides.

Make sure to go for true Romano, which will be labeled as Pecorino Romano. Quality Pecorino is rich in CLA, a fatty acid that studies found is protective of cardiovascular health 13. Other than that, you’ll get lots of calcium, B vitamins, and vitamin A from this cheese. 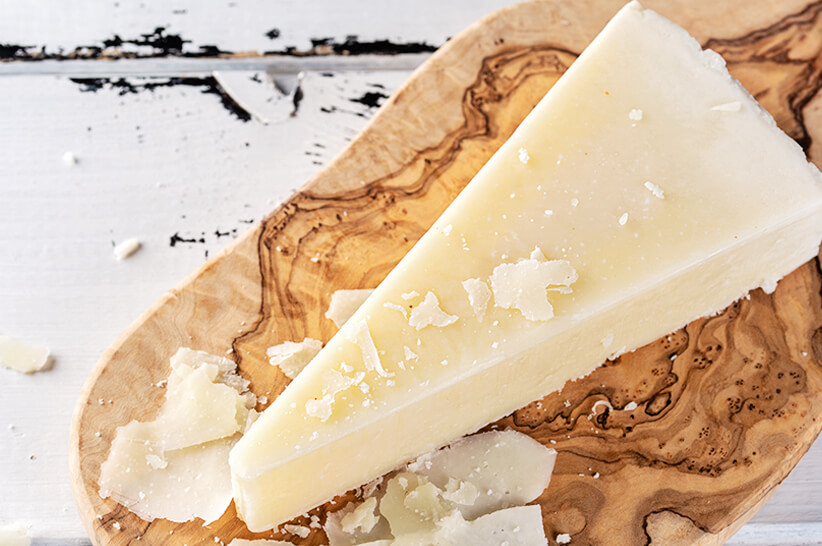 Romano is an underrated type of cheese for the keto diet.

Another cheese often made with goat’s milk (mixed with sheep’s milk) is this semi-hard, unripened, brined type. It’s salty, which you’ll appreciate on keto. It also has a higher-than-average melting point, which makes it perfect for frying. In fact, it’s one of the most popular cheeses to fry.

Halloumi is a high-protein and calcium-rich cheese, both of which help protect bone health. It’s very low in carbs, so you don’t have to worry about eating too much. Some of the best keto cheese brands of halloumi include Cypressa and Ocado. 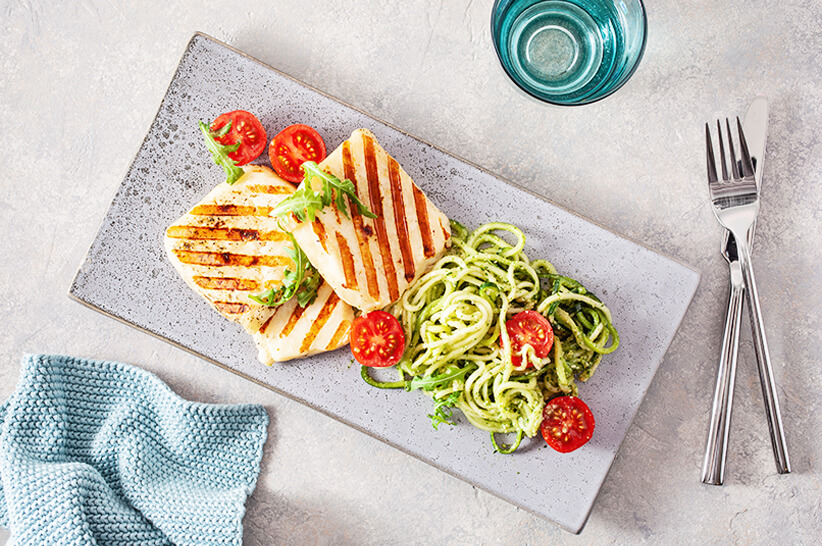 Enjoy your halloumi fried and with zoodles.

“Not all cheese is created equal when it comes to the keto diet,” explains nutritionist Lisa Richards. Some do not contain what she calls an “ideal ratio of fat to carbs for a proper keto snack.” However, some cheeses are also highly processed, which is something you’ll also want to avoid on a keto diet since you need to focus on getting most out of your food. Here are examples of cheeses that fit the above description:

Cheese and keto go hand in hand. Cheese is usually high in fat and carbs in cheese are usually found in tiny amounts. That’s why eating cheese on keto helps eat within recommended keto macros. Cheese is also a popular and versatile keto cooking ingredient. Choose between these 9 varieties and you won’t go wrong.