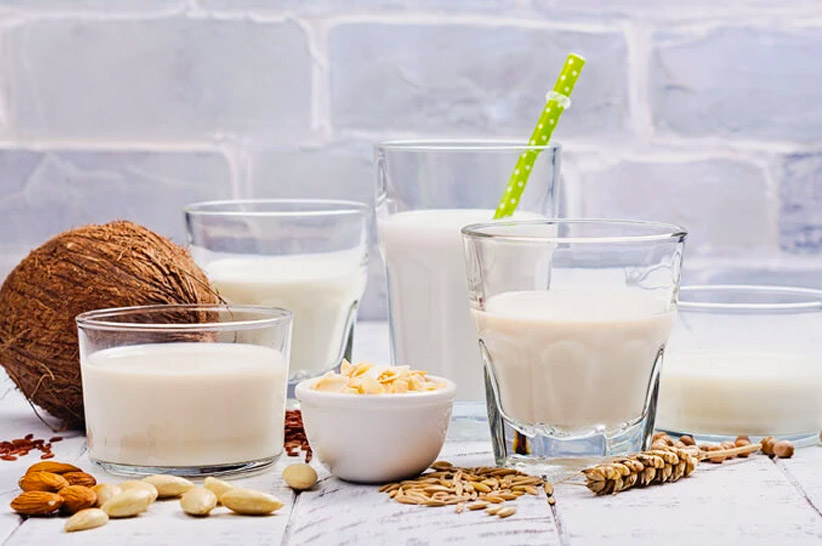 Most keto dieters avoid dairy milk and consume milk substitutes instead. Here’s why that’s the case.

The best thing about going keto is that you can eat butter, cream, and cheese to your heart’s content. But if you’ve been on keto for a while, you also likely noticed that guidelines rarely mention milk, from which all dairy products are made, which is kind of strange and may leave you wondering:

Dairy milk is not keto because, like other non-keto foods, it’s a source of carbohydrates from its natural sugars. The sugar naturally present in all milk is hard to digest for some people, which is another reason many keto dieters may want to steer clear of this breakfast staple. 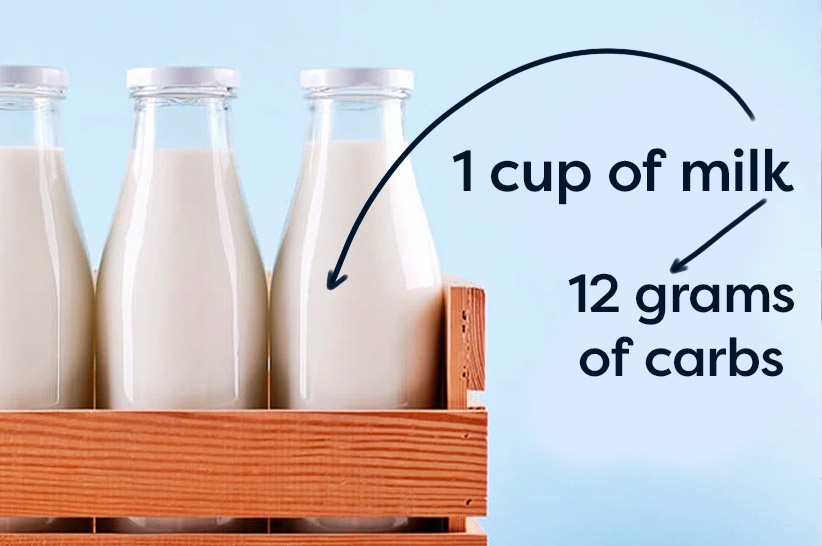 However, in this article you’ll learn in more detail why milk is not suitable for a keto diet and which dairy alternatives are keto-approved. You’ll also learn about the many health benefits of keto milk substitutes and how you can make homemade versions.

So, with all that said:

There are two main reasons to avoid milk on keto: it’s a source of carbs and it can be hard to digest for some people.

According to the USDA nutrient database, one cup of milk has 12 grams of carbohydrates 1.

On a keto diet, you need to keep your carb intake below 20-50 grams per day to stay in ketosis.

Most keto dieters eat 3 meals a day, which means that each meal should have a carb limit of around 6-16 grams. Do the math and you’ll see that a cup of milk is already close to or above this limit.

The second reason why some people may want to avoid dairy milk is lactose intolerance — the inability to digest the sugar in milk called lactose. Approximately 65% of the world’s population has a reduced ability to digest lactose 2. Most babies don’t belong to this group since most of us are born with the ability to effortlessly digest milk, but this ability can begin to decline shortly after weaning.

However, populations that have relied on cattle farming for survival have genes that help them retain their lactose-digesting ability well into adulthood. Populations that don’t consume dairy are the exact opposite; consider the fact that 90% of Scandinavians can digest lactose compared to only 1% of China’s population 3.

But What About Other Dairy?

Now you’re probably thinking, “If I can’t have milk on a keto diet because it has lactose, why is it that I can have other dairy food?”

But here’s the deal:

High-fat dairy, which is what you’ll be eating on a keto diet, has less lactose than milk. A tablespoon of butter, for example, has 0.1 grams of carbs, while cream has half of the carbs found in milk. The lower carb (i.e. lactose) count also means that these foods are easier to digest, even for those with lactose intolerance.

Cultured dairy products such as yogurt are also allowed on a keto diet because it’s lower in carbs than milk. (Remember to choose plain, unsweetened whole milk versions for keto!) Probiotics, or good bacteria in yogurt, also aid in the digestion of lactose 4. Because of this, many people who have trouble digesting fresh milk can eat cheese and yogurt without discomfort.

Can I Go for Lactose-Free Milk Instead?

Therefore, the sugar is still there, it’s just easier to digest, which is why a cup of lactose-free milk has the same amount of carbs as regular milk.

What Are Some Good Keto Milk Replacements?

For your keto breakfast cereal, smoothies, pancakes, and other meals where milk is a must, here are some great alternatives (all unsweetened):

With its creamy texture, subtle nutty flavor, and exceptionally low carb count, almond milk is one of the most popular dairy substitutes not only on the keto diet, but other diets as well.

Why almond milk is keto

One cup of unsweetened almond milk has only 30 calories, 1 gram of net carbs and 3 grams of fat. It’s also a natural source of vitamins A and E, but many brands add calcium and vitamin D to their product to bring its nutrition profile closer to dairy milk.

Almond milk is currently the most popular dairy milk alternative in the US, surpassing even soy milk in sales 5. Almond milk is less likely to cause allergies than cow’s milk, which is a reason it’s widely popular 6.

You can buy almond milk at any local or health food store or you can make your own at home:

High in fat and low in carbs, coconut milk is another keto diet favorite. Rich in naturally occurring medium chain triglycerides (MCTs), it can have some advantages over other plant milks when it comes to ketosis.

Why coconut milk is keto

A cup of coconut milk (usually found in cans in the store) made from coconut flesh has 8 grams of net carbs, 57 grams of fat, and 5.5 grams of protein. This serving size has over 500 calories, most coming from fat, which makes up 25% of its weight. However, most coconut milk sold in cartons in stores are much lower in fat and calories than this, which may be more practical for daily use.

Coconut milk can help add beneficial fats to your keto diet, but it can also add creaminess and a subtle coconut flavor. If you’re trying to keep your saturated fat intake low, keep in mind that the saturated fats in coconut milk are different from those found in animal foods. The fat found in coconut milk is mainly in the form of MCTs, particularly lauric acid.

A study published last year found that coconut fat had a similar effect on LDL, or bad cholesterol, compared to olive oil, while increasing HDL, or good cholesterol. 7

You may choose to buy canned or carton coconut milk, or make your own by soaking shredded coconut in hot water, blending it in a food processor, and draining through a nut bag or muslin cloth.

Hemp milk is a protein-rich dairy milk alternative made from industrial hemp seeds. The process of making this plant milk is similar to how other plant milks are made: the seeds are soaked in water, blended, and strained. One cup provides 5 grams of carbohydrates, 6 grams of fat, and 5 grams of protein. It’s also enriched with iron and calcium.

The higher protein content of hemp milk makes this keto milk more similar to cow’s milk nutritionally. The protein, in addition to moderate amounts of fat, make it quite filling. Hemp, being balanced in omega-3 and omega-6 fatty acids, may also be great for heart health according to one study review 8.

Tastewise, hemp milk is subtly sweet with a hint of nutty flavor. Just like other plant milks, you can make this one at home as well: add ½ cup hemp hearts to 4 cups filtered water and blend on high speed until smooth and creamy. Squeeze out the mixture through a muslin cloth and discard the pulp.

If you’re looking for a keto milk substitute that’s also nut-free and gluten-free, then consider pea milk. Don’t worry, it tastes nothing like peas and is not green, we promise! That’s because the process of making this plant milk is quite different from other dairy alternatives.

To make this pea milk, manufacturers first grind yellow peas into flour and then extract pea protein from it. Pea protein is then purified and blended with water and sunflower oil. Nutrients like vitamin D and calcium are added as well.

Pea milk has the same amount of protein as cow’s milk at 8 grams. There are only a couple of studies on pea milk because it is fairly new on the market. However, there are plenty of studies showing that pea protein is a great animal protein alternative.

For example, a 2015 study found that pea protein was effective in increasing muscle thickness when compared to a placebo, and could be used as an alternative to whey protein 9.

As with all dairy milk alternatives, check if the product has added sugars. The best place to look for pea milk may be Amazon and other online stores since it’s relatively new on the market, but many specialty health food stores likely carry it as well.

Flax milk is another dairy-free keto milk alternative. It’s made by finely grinding whole flax seeds with water and straining the mixture, resulting in a rich and creamy dairy alternative that’s low in carbs and high in fat, particularly omega-3 fatty acids. However, it has one major downside: it has no protein.

Studies on flaxseed show that its high omega-3 content and lignans may help reduce the risk of heart disease and certain cancers 10. Omega-3s are essential fats that support normal brain functioning and prevent cardiovascular disease. Lignans are antioxidant compounds with possible anti-estrogenic effects, which may be protective against certain cancers, including breast cancer 11.

Most store-bought flaxseed milk has preservatives in it due to its high omega-3 fatty acid content as omega-3s are prone to rancidity. You can make fresh flax milk at home by mixing ½ cup of flax seeds with 4 cups of water and blending on high speed until smooth and creamy. Strain through a cheesecloth or nut bag and use within 2 days (store in refrigerator).

What About Other Dairy Alternatives?

With growing consumer demands, we’re seeing more and more milk alternatives hit the store shelves, but not every dairy-free milk is suitable on a keto diet. Here are some popular examples and why they may not be the best choice on keto.

Soy milk is closest to dairy milk nutritionally speaking. A cup of soy milk will give you around 12 grams net carbs, which isn’t practical on a keto diet. Many soy milks are sweetened, which further increases the carb content.

Oat milk is a popular plant milk, but it tends to be higher in carbs because it’s made with oats. Even unsweetened oat milk contains around 9 grams of carbs per cup, which is why it isn’t the best milk alternative on keto. Other grain milks like rice milk and spelt milk are also not compatible with keto.

To wrap it all up:

Can you have milk on keto?

When it comes to traditional milk, the answer is no, it’s not compatible with keto. But non-dairy, plant-based alternatives are perfectly fine, providing they’re low enough in carbs.

When buying keto milk substitutes, go for low-carb, higher-fat varieties whenever possible. Almond milk is one keto favorite that’s taking over the non-dairy milk aisles, while coconut milk is also a good option. There are many other great alternatives to choose from, keeping in mind that not all plant-based milks are keto-friendly.

Besides replacing milk in your low-carb diet, milk alternatives can help you meet your macros and provide added benefits such as providing important vitamins and minerals. With so many choices out there, there’s a keto-friendly milk alternative suitable for everyone.