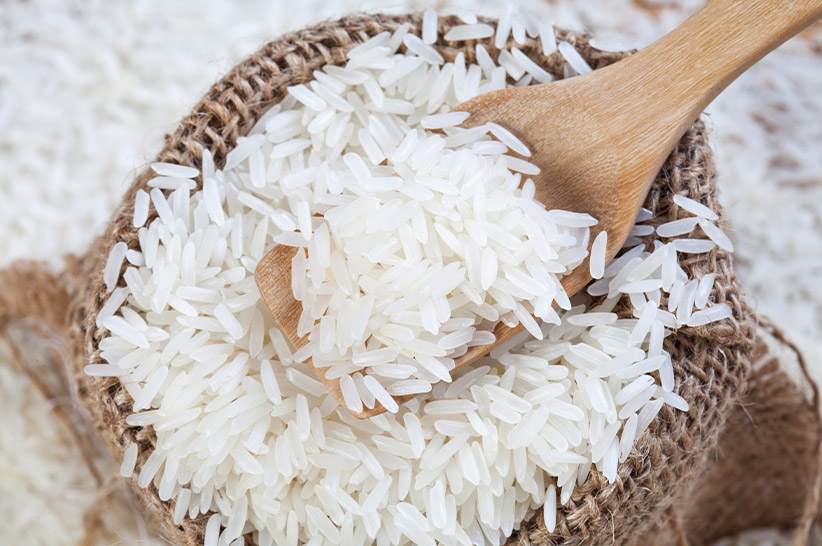 White rice isn’t allowed on keto. One cup has 49-52g net carbs. However, you can eat rice prior to a workout to restore your muscle glycogen and help with your recovery.

When talking about rice, what most are referring to is white rice, which is a refined grain. One cup of cooked white rice contains 49g of net carbs, almost no fiber, and 4g of protein 1. The rest is mainly water. White rice is not a good source of micronutrient unless fortified. Many countries have laws for mandatory enrichment of white rice to protect the population against thiamine deficiency (beriberi) 2.

However, white rice is not the only type of rice out there. Many other varieties of this staple grain are rich in fiber, minerals, vitamins, and antioxidants. Brown (whole grain) rice is just one example. And while brown rice and other unrefined varieties are healthier than white rice, it’s still not an option on keto. Like every grain, rice provides energy in the form of carbohydrates. On keto, you should eat only those foods that provide energy in the form of fat (e.g. avocado) or that contain only a negligible amount of carbs (e.g. spinach).

Rice (Oryza sativa) is an old cereal grain believed to have been grown for over 5,000 years. Today, it’s the most widely consumed grain in the world and a staple food for half of the world’s population 3. Rice comes in many different shapes, sizes, and colors. In fact, there are over 40,000 varieties of cultivated rice 4. The below examples are the most popular ones consumed today.

Rice is broadly categorized into brown and white. White rice is any rice that was milled and, thus, has the bran and germ removed. White rice is a broad category and includes many different types of rice, including:

Most people consume rice in its refined form, i.e. white rice. Unfortunately, higher intake of this type of rice is linked to metabolic syndrome and blood sugar spikes 5, 6. That’s because all refined grains are digested quickly due to having a high glycemic index (GI) of around 73. The GI is a value assigned to food based on how quickly it raises blood glucose.

Fiber normally helps slow down the digestion (and conversion to blood glucose) of starchy foods such as rice. Food that’s digested more slowly is also less fattening and fiber in it helps maintain gut flora, which is essential for metabolic health 7.

Health authorities across the globe now agree that greater refined grain consumption over the past century is one of the leading causes of the global rise in obesity and chronic disease 8. That’s why it’s recommended to boost intake of whole grains (at least on high-carb diets).

Brown rice is simply whole-grain rice with only the outer hull being removed. Like all whole grains, brown rice contains the fiber-rich bran and fat-rich germ. Both the bran and germ are also valuable sources of vitamins, minerals, and antioxidants. While brown is the usual color of whole grain rice, some varieties come in gold, black, and red colors, which is caused by different pigments of the rice’s outer layers. Examples of whole grain rice include:

While brown rice (and other whole grain rice) has more nutrients and antioxidants, it still has the same number of calories from carbohydrates as white rice. The GI of brown rice also isn’t much lower than that of white rice, around 68 to be exact.

Still, studies show that brown rice helps lower blood glucose in those with type 2 diabetes 9. Not so long ago, most of the rice consumed was actually brown rice. It was only after advances in milling in the 1800s that refined grains like white rice started becoming more commonplace. Not surprisingly, around this time, more and more people started developing metabolic and cardiovascular diseases.

Wild rice is not really true rice. Wild rice includes different species of grasses and usually refers to the grains obtained from them. Wild rice has a different flavor than true rice with herbal undertones. It also has an interesting nutrient profile, having as much protein and fiber as oats and having fewer carbs than true rice 10.

Wild rice is also incredibly rich in micronutrients, most notably iron, magnesium, potassium, zinc, and B vitamins 11. Researchers also believe that wild rice provides a range of health benefits such as protection against cardiovascular diseases, diabetes, and obesity 12. These benefits are at least partially due to antioxidants which are abundant in wild rice.

How Many Carbs in Rice?

And while certain varieties of rice may provide health benefits for people following carb-based diets, those on low-carb diets are more concerned about the carbs in rice. So, how many carbs are there in rice? The short answer is a lot.

Dry white rice is 90% carbohydrate and it accounts for almost all of its calories. Starch is the main type of carbohydrate in rice. Starch contains long chains of glucose that are known as amylose and amylopectin.

When cooked, rice contains 50% water and 50% carbohydrates roughly speaking. To put that into perspective: One cup of cooked white rice provides 49-52g of pure carbohydrate. Cooked brown rice provides only slightly less than that.

Low-carb diets such as the ketogenic diet provide health benefits differently than other healthy diets. The goal of such diets is to lower blood glucose levels but also to put the body in ketosis. In order to do that, carb intake needs to be below 50g per day while also allowing for normal intake of fiber and nutritious plant food.

In order to stick to this low-carb limit, keto dieters are advised to avoid eating all grains and other high-carb foods.

How Many Calories in Rice?

Food that is dense in macronutrients such as carbohydrates is also rich in calories. One cup of cooked rice provides roughly 200 calories. That’s not insignificant given that rice is usually served as a vessel for other even more caloric ingredients like stir-fries, sauces, and meat.

Both brown and white rice are a major source of carbohydrates and energy. Rice is a staple ingredient across the globe, but especially in many Asian countries such as India, China, Japan, Indonesia, and Thailand, to name a few. However, brown rice is denser in important nutrients such as:

Many rice suppliers will fortify white rice with iron and B vitamins. However, rinsing fortified rice tends to remove these nutrients. That’s why it’s best to stick to eating brown rice and other whole grains if your goal is to improve your overall nutrient intake. White rice also does not contain fiber, which is one of its major disadvantages.

Can You Eat Rice on the Keto Diet?

In a nutshell, no. As already said, rice is a high-carb food and keto is a low-carb diet.

One cup of cooked rice a day will get you pretty close to the daily carb limit on this diet (50g), and you will have no room left for fiber-rich and nutritious vegetables like cucumbers, spinach, celery, and avocado. On a keto diet, you need to eat some amount of fruits and vegetables to get important vitamins (like vitamin C) and fiber, which are not found in animal foods.

However, there is one exception to this rule: the cyclical ketogenic diet (CKD). On this version of keto, you’re allowed to eat high-carb foods up to two days a week. The goal of this is to replenish your glycogen stores and to temporarily pause ketosis. Some dieters believe that long-term ketosis isn’t good, so they follow the CKD instead. However, this version of keto is most popular among athletes as it is believed to help increase muscle strength and growth.

If you’re not following the keto diet, then you may be wondering if there are any health benefits associated with rice intake. 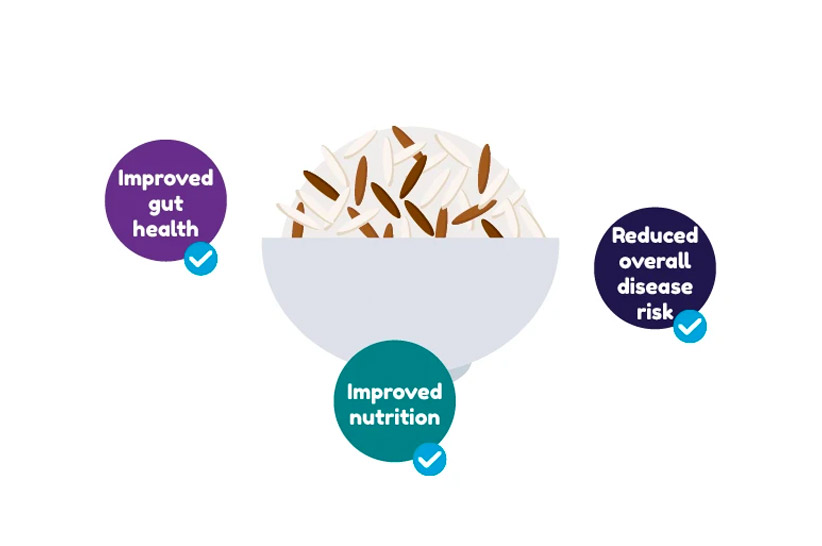 Brown rice contains 3.5g of fiber per cup. Fiber is an indigestible carbohydrate that feeds friendly gut bacteria. When gut bacteria ferment certain fibers, they form short-chain fatty acids such as butyric acid, which is know to reduce the risk of colon cancer 14. It also increases stool bulk and stimulates bowel movements.

White, brown, and wild rice are all sources of nutrients, most notably carbohydrates. However, brown and wild rice are both denser and richer in fiber, vitamins, and minerals. Switching to whole grains, in general, can help increase total nutrient intake in the long run 15. However, any type of rice can improve nutrition in general since it is a cheap staple food available across the globe.

A review including 21 meta-analyses concluded that whole grain intake can be beneficial for the prevention of cardiovascular disease, type 2 diabetes, and colorectal, pancreatic and gastric cancers 16. That’s because our digestive system needs fiber to stay healthy. However whole grains like brown rice also contain antioxidants that help reduce disease risk.

How to Eat Rice on Keto?

On keto, you can only eat rice during the one to two carb-up days on the cyclical version of this diet. Otherwise, you’re advised to stay away from rice when following a low-carb diet such as keto. Another exception is the targeted ketogenic diet (TKD) where you eat more carbs (up to 150g) right before or after your workouts. The goal of this is also to replenish muscle glycogen and help with muscle recovery.

Here are some steps you need to take if you’re planning to include rice as part of your carb refeeds on the CKD or TKD:

After several weeks of being in ketosis and becoming keto-adapted, you can start switching to a less restrictive form of the ketogenic diet such as CKD or TKD. On days you plan to carb-up, include a cup of cooked brown or white rice as part of any meal of your liking. It’s best to go for brown rice on a CKD diet to boost your overall nutrition. However, if you’re planning to follow the TKD, then white rice is better since it turns to muscle glycogen more quickly and easily 17.

If you’re planning to follow the standard keto diet, then you’ll want to look into rice substitutes. A popular substitute for white rice on keto is cauliflower rice. As you may have already guessed it, cauliflower rice is faux rice made from cauliflower. To make it, you simply shred raw cauliflower in a food processor until small rice-like grains form and cook it shortly in water or stir-fry it.

Remember that the ketogenic diet improves health through different mechanisms than more standard health diets such as the Mediterranean diet. On keto, the goal is to force the body to switch from burning sugar to burning fat. This metabolic shift comes with a plethora of health benefits not seen with other diets like seizure control and diabetes control.