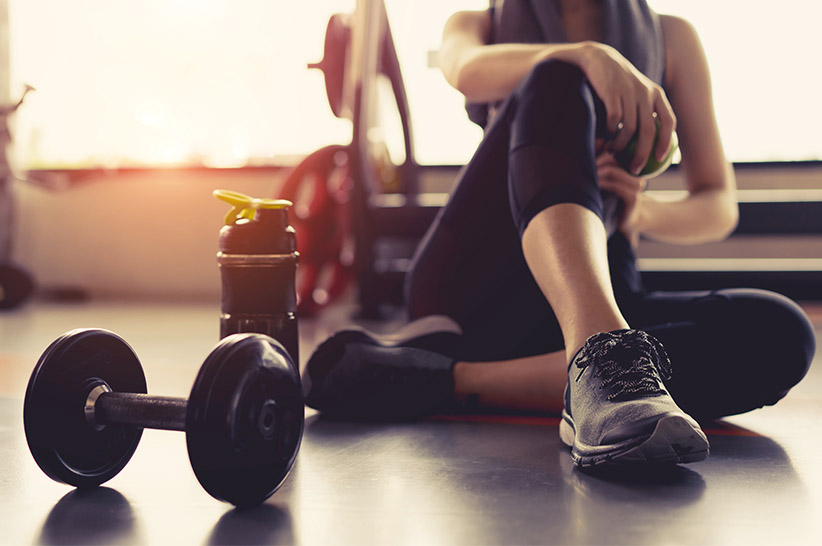 Is the cyclical ketogenic diet (CKD) better than standard keto? The short answer is we don’t know. The CKD is great for many people, but so is the standard keto diet.

The issue with being in constant ketosis vs cycling in and out of it is difficult to explain. Still, to help you make the best diet choices, below is the current evidence for and against the CKD.

What Is the Cyclical Keto Diet or CKD?

The CKD is also referred to as carb cycling. It is simply a keto diet combined with intermittent periods of high carbohydrate intake. On a standard keto diet, your carb intake needs to be below 50g per day, every day to maintain ketosis. On a CKD, you eat fewer than 50g per day for 5-6 days a week and up to 150g for 1-2 days a week, which temporarily kicks you out of ketosis.

The CKD is said to help athletes fuel their workouts and build muscle. However, the diet can also be helpful for curbing cravings. Let’s face it, sticking to fewer than 50g of carbs per day is physically and mentally taxing. The CKD can help make keto much more bearable.

Many keto advocates today promote this more relaxed version of keto with arguments that:

However, these claims are not always supported by evidence 1, 2. The fact of the matter is that carbs are not an essential nutrient, unlike protein and fats. Another fact is that your body satisfies its needs for glucose by turning proteins into glucose (gluconeogenesis). Furthermore, studies show that long-term ketosis of up to 24 weeks poses no health risks 3. So, the question of whether carb cycling is better than long-term ketosis remains open, and which one you should go for boils down to preference.

The cyclical keto diet and the standard keto diet are two versions of keto meant to put the body in ketosis. But the CKD also lets you take a break from ketosis. Here are other major differences between these two diets: 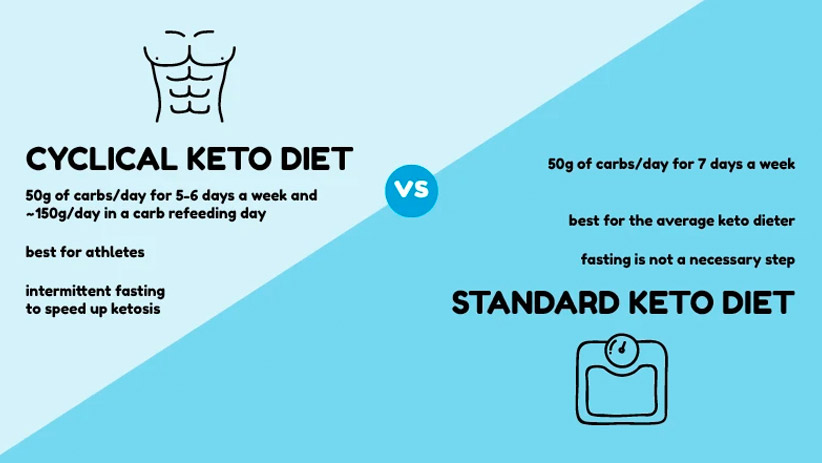 Which is better in which case?

The CKD beats standard keto when it comes to short-term exercise improvements. Studies show that short-term keto diets reduce exercise performance during anaerobic activities 4. That’s because short-term keto depletes muscle glycogen before your muscles are able to use ketones properly.

Long-term standard keto, on the other hand, leads to something called keto-adaptation.

Keto-adaptation is when your muscles become efficient at utilizing fat and ketone, usually after 8 weeks on the diet. Researchers found that athletes who are keto-adapted see an improvement in their performance and body composition 5.

The standard keto diet is also good if you need to lose a lot of weight or treat an illness. Most keto diet studies to date were done using the standard keto diet anyway. However, if you’re finding that you suffer from carb cravings or uncomfortable side effects after being on keto for many months, then switching to CKD may be a good idea.

Benefits of the Cyclical Keto Diet

The CKD has benefits not seen with a standard keto diet. Knowing what these benefits are may also help you decide which approach to keto you should take. Below is a list of some reported and studied benefits of the CKD.

It takes a lot of effort, time, and willpower to follow a standard keto diet in order to become sufficiently keto-adapted. The CKD is much easier to follow if you’re an athlete. It lets you eat just enough carbs to replenish your muscle glycogen, which is always a plus when it comes to workout performance.

Keto dieters often suffer from intense carb cravings after some time on keto. The CKD can help curb these cravings. After carb refeeds, your ketone levels drop and blood glucose levels increase, which signals your brain to produce satiety hormones 6, 7. And knowing that you’re going to have a carb-rich meal by the end of your week also helps control cravings.

If you’re a bodybuilder, powerlifter, or just someone looking to build a bit of muscle, then CKD is likely a better option. Lots of research shows that insulin is an anabolic hormone, meaning it promotes muscle growth 8. Low-carb diets lead to drops in insulin levels, which can make building muscle difficult.

Ketones are your brain’s preferred fuel, and countless studies show they improve overall brain and mental health 9. However, too much of a good thing can leave you feeling restless and agitated. So, giving your brain a break from ketones can help you feel better, sleep better, and improve your mood.

There are essentially three stages to the CKD: the fasting stage, the standard keto diet stage, and the carb load stage. Each stage is important to get the diet to work seamlessly.

Intermittent fasting (IF) is a type of short-term fast where you skip meals and eat within predetermined “feeding windows”. For example, skipping breakfast and having your next meal around noon is intermittent fasting. There are many different types of IF, including the OMAD fast.

On a CKD, fasting will help you get back into ketosis quicker than eating a high-fat breakfast. Fasting depletes blood glucose and liver glycogen quickly, both of which are necessary for ketosis to take place.

So, how do you use IF on a CKD? We suggest having dinner before 8 PM and starting your morning with keto coffee. Keto coffee contains 0 net carbs and plenty of MCTs, which are highly ketogenic and satiating. This will keep you feeling full until your next meal in the afternoon.

Have your first meal of the day around 12-2PM. Because you had your last meal the night before, you will have now fasted for 16-18 hours. That’s enough to boost ketone production. However, IF on a CKD is flexible and even optional.

This stage starts on day one of your CKD in the afternoon hours. This is when you break your fast with a high-fat meal. You’ll keep eating food that’s approximately 70% fat, 25% protein, and 5% carbs for the remainder of your week.

In case you don’t know what to eat to maintain ketosis, check out this 2-week ketogenic diet plan for beginners. It includes shopping lists for keto vegetarians and those looking to avoid dairy. Make sure to include a variety of foods, including low-carb vegetables to avoid nutrient deficiencies on this diet.

In case you’re worried that cycling in and out of ketosis means weekly bouts of keto flu, don’t be.

The keto flu usually affects keto beginners who are withdrawing from carbs for the first time in their life. Because being on keto for some time makes your body keto-adapted, you won’t experience the keto flu.

Another thing worth noting during the standard keto stage is MCT oil. Although this is not necessary on keto, it is a valuable supplement. There’s a good reason its sales have been skyrocketing over the past couple of years: it suppresses appetite and boosts ketone production.

After 5-6 days of eating high-fat and low-carb, it’s time to reload. Now, this is where many keto advocates disagree on. Some state that you should eat as much as 700g/day, while others claim that up to 150g/day is enough to replenish your glycogen.

We suggest keeping your intake moderate because your goal is not to go to extremes; it is to get enough carbs to slightly reduce ketone production and restore glycogen levels. Studies show that 130-150g of carbs a day is all your body needs to supply enough glucose to keep you out of ketosis 10.

Now, what about the sources of carbs? Should you immediately gorge on a Snickers bar on Sunday? Sure, you could. But if you really want to do your health good, then go for these wholesome foods:

As a rule of thumb, it’s best to go for whole grains, starchy vegetables, and other wholesome food. However, don’t go for fruit that’s high in fructose. Fructose does not raise insulin and blood glucose levels.

How to Start a Cyclical Keto Diet

To start a cyclical ketogenic diet, simply make a standard keto meal plan and add 2 days of carb reloading to it. During your carb-loading days, eat up to 150g carbs a day from whole grains, legumes, and starchy vegetables.

In order to measure your macros during each stage, use diet apps like MyFitnessPal. These will help you keep track of your food intake, which is important both for ketosis and for not going overboard with the carbs during your carb-up phase.

Should I Try a Cyclical Ketogenic Diet?

If you feel like the standard keto diet can’t help you power through your workouts, then definitely go for a more cyclical approach. You may also benefit from this diet if you really enjoy carbs and can’t imagine life without them. The CKD makes sticking to keto easier and simpler.

However, if you want to lose a lot of weight in the shortest span of time possible, the standard keto diet is better.