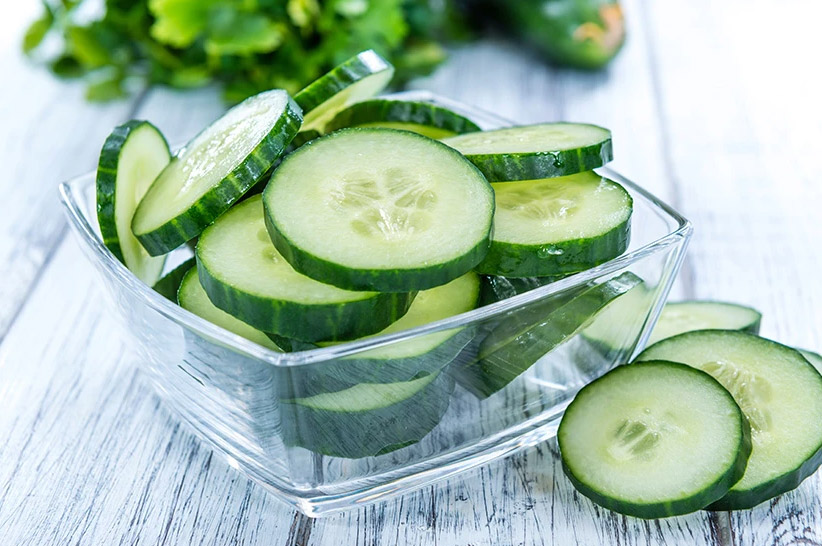 Cucumbers are a refreshing salad staple. But how many carbs do cucumbers have? And is their carb count low enough to make them keto-friendly?

Cucumbers are one of the lowest carb veggies out there at around 1.5 grams of net carbs in half a cup of sliced produce 1. In fact, most cucumbers are mainly water (about 95%), with the remainder being net carbs and fiber 2.

You’re probably wondering whether these carbs in cucumbers matter on the ketogenic diet regimen. The short answer is that they don’t really matter too much since there are only negligible amounts of carbs in cucumbers. Therefore, you can definitely add them to your keto salads, dips, and other meals. Not to mention that cucumbers are a fantastic source of health-boosting phytochemicals and antioxidants.

No matter if you go for slicing, pickling, Persian, or gherkins, you can benefit from adding cucumbers to your keto meal plan.

In this article, we will talk about the nutrition data for cucumbers with a special focus on the carbs in cucumbers. We will also discuss how cucumbers can benefit you on a ketogenic diet and how to add them to your daily meals.

How Many Carbs Are in Cucumbers?

At only 1.5 grams net carbs in half a cup of sliced produce, cucumbers are definitely a low-carb vegetable. This fact alone makes cucumbers an ideal keto-friendly vegetable. But there’s more to this summer vegetable than its low carb content. Here’s more on the nutritional value of cucumber.

How many calories are in cucumber?

A cup of sliced cucumbers with peel (around 100 grams) provides just around 15 calories 2. Most of these calories are from the tiny amount of net carbs we mentioned earlier but some are also from its protein and omega-3 fatty acids (less than 1%).

The nutritional value of cucumber

As far as the micronutrient profile of cucumbers goes, there’s really not much to it. Although not very nutrient dense, a cup of sliced cucumbers with the peel provides around 15% of the daily value (DV) for vitamin K 3. Cucumbers also contain small amounts of the minerals calcium, magnesium, potassium, manganese, and iron (2-4% DV) 4.

Can You Eat Cucumbers on the Keto Diet?

Yes, cucumbers are fantastic for keto and here are 5 reasons why. 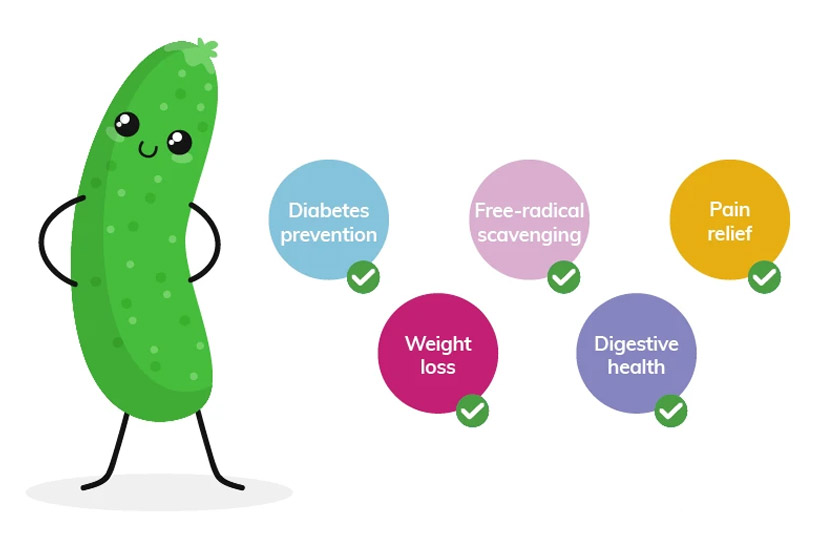 Cucumbers provide a plethora of health benefits that are especially noteworthy when you’re on a keto diet.

The flavonoids and tannins in cucumbers are also mild pain relievers. These compounds relieve pain by reducing inflammation through their effect on prostaglandins – hormone-like substances that play a role in the inflammatory response.

Because cucumbers are a low-calorie vegetable, they also promote weight loss. Replacing high-carb and calorie-dense food with cucumbers will definitely help you get closer to your goal weight.

Because of their high-water content and moderate levels of fiber, cucumbers can help improve digestion. Staying well-hydrated, especially when beginning a keto diet, is important for regular bowel movements. If you go for naturally-fermented cucumbers (pickles), then you will also improve your intestinal flora since this fermented form of cucumbers is loaded with probiotics.

How to Eat Cucumbers on Keto

There are hundreds of cucumber varieties. However, the edible ones are divided into three main groups: slicing, pickling, and seedless. All groups of cucumbers are perfect for the keto diet. Which one you should choose will depend on your taste and preferences.

The most popular cultivars are slicers, burpless, English cucumber, and lemon cucumbers. Burpless cucumbers are great if you don’t like bitter food. However, you will miss out on some health benefits since these are lower in cucurbitacins. Pickling cucumbers are specifically grown for pickling and they also include gherkins which are small in size (around 1-5 inches).

If you like pickles, then go for naturally-fermented products. Many commercial pickles are not really fermented, and the brine may contain added sugars. Bread-and-butter pickles are an example of pickles you need to avoid due to their higher sugar content.

Cucumbers are delicious all on their own. However, you can also add them to salads, low-carb sandwiches, dips, and sauces with pickles. A cucumber salad with cream and dill is an example of a perfect keto dish since it’s low in carbs and high in fat.

Other ways you can prepare cucumbers include making cold, refreshing soups and you can also use them as crudités. Tasty keto dips with cucumbers as crudités include guacamole, hummus, and sour cream with herbs. The mild taste of cucumbers also pairs wonderfully with yogurt in any kind of salad. Flavored cucumber water is also a great low-carb option.

The exceptional water and electrolyte content of cucumbers can help you during summer heat waves. Cucumbers can also help you stay hydrated and feel better when dealing with keto flu.

Since there are only negligible amounts of carbs in cucumbers, you can definitely add this summer veggie to your keto food list. Besides helping you stay within your keto macros, cucumbers also provide added health benefits like glycemic control, antioxidant protection, and even mild pain relief.

To get the most out of a cucumber, definitely eat them with the peels on since that’s where all the nutrients and antioxidants are concentrated. If you’re worried about pesticides in the peels, then go for organic produce. Add cucumbers to your keto salads, soups, dips, and sauces and you’ll stay hydrated, full, and within your daily keto macros.