Home → Articles → Nutrition → What Are Net Carbs and How to Calculate Them? 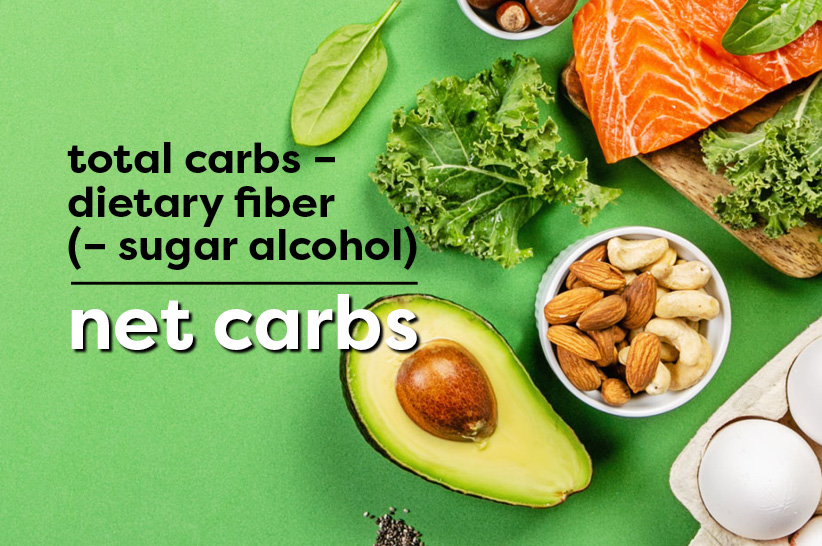 Dang Bars vs Kiss My Keto Bars: Which Is More Ketogenic?

What are net carbs? This is a question that a lot of people on a low-carb, keto diet ask. Find out more in this article.

The term “net carbs” is often seen in food product labels, and it can make you stop and wonder what it actually means. Shouldn’t carbs just be called carbs? Net carbohydrates is an important concept if you’re following a diet, such as keto, that limits your carb intake.

It may not be officially recognized by nutritionists or unregulated by the FDA, but knowing it will enable you to make better food choices. Keep reading below.

What Are Net Carbs?

As your body digests carbohydrates, most of the carbs get converted into glucose. The rest of them are non-digestible, such as dietary fiber and sugar alcohol 1, 2.

When it comes to fiber, study tells us that fiber remains intact in plants. Examples include fruits, vegetables, and grains. Furthermore, fiber helps you feel full and aids in a healthy digestion 1.

Meanwhile, most sugar alcohols are poorly digested and cause loose stools if consumed in excess amounts 2. Examples of sugar alcohols include erythritol, xylitol, maltitol, sorbitol, and isomalt.

This tells us that keeping track of carbs or net carbs on keto matters more than we think. Going above your total carb limit will raise your blood glucose and insulin levels, kicking you out of ketosis.

In the keto community, there’s a debate on whether one should keep track of their total carbs or net carbs.

The answer to this question will actually depend on a couple of factors. For instance, if you’re following the keto diet for medical reasons and if it’s prescribed by your doctor, it might be best to count total carbs to avoid the risk of exceeding your limit.

Some people, on the other hand, feel their best by counting net carbs while being able to remain in ketosis. But if sticking to net carbs fails to put your body in a fat-burning state, it may be ideal to stick to total carbs instead.

But don’t just consider net carbs vs total carbs. More importantly, pay attention to the quality of carbs you’re consuming. We wrote an article where we discussed the difference between good carbs and bad carbs and provided specific food examples.

How to Calculate Net Carbs

Now that we’ve discussed the difference between carbs and net carbs, the next thing to know is how to calculate net carbs. To do that, follow this simple formula:

Let’s take an example. Say, a piece of keto-friendly chocolate bar has 12 grams of TOTAL CARBS, 6 grams of DIETARY FIBER, and 3 grams of SUGAR ALCOHOL (erythritol).

Since these foods do not come with nutrition labels at the grocery, you can simply rely on a nutrition database like Food Data Central. When you enter any food, it gives you full information on the specific amount of carbs, protein, fiber, minerals, water, and more.

After subtracting 10 grams from 12 grams, I would get 2.8 grams of net carbs. Take note that whole foods are devoid of sugar alcohols, so you won’t take that into account.

Foods that undergo processing such as bars, cookies, and other forms of keto snacks, may contain sugar alcohols aside from fiber. This is especially true in sweet keto foods.

Should You Always Count Net Carbs?

Tracking net carbs has its share of advantages and disadvantages.

One advantage of counting net carbs include the freedom and flexibility to explore more food options. Sticking to total carbs will somehow limit your number of choices.

And since your total carb intake is higher, because you’re only counting net carbs, this may benefit your workouts — especially if you’re doing high-intensity exercises that deplete glycogen fast. You’ll need that extra energy to get the most out of your sweat session.

Being able to eat more fiber in your diet is another benefit of counting net carbs. A lot of high-fiber foods contain a higher amount of total carbs. Examples include cashew nuts and baby carrots.

For those who are just getting started with the keto diet, net carbs will prevent their energy from dropping too low as well as hypoglycemia.

A big downside is the tendency to overeat snacks and treats. Over time, this may lead to a keto weight loss stall. You may have lost pounds when you first started, but there will come a time when you no longer see the number on the scale move.

Some people also do best with tracking total carbs instead of net carbs. They find that they lose fat faster and that they’re able to monitor their carb intake for the day more accurately.

Just keep in mind that to lose weight, you eat 50 grams of net carbs or less.

We’ve already answered the question, “What does net carbs mean?” Again, net carbs are calculated by subtracting fiber and sugar alcohol from the total carbs. With that, it’s important to know their specific amounts in the foods you eat. Check the food labels or use a food and nutrition database online for whole foods.

Whether you focus on net carbs or not depends on your individual response to carbs. It helps to consider your weight loss goals, the possibility of stalling, your workouts, and the advice of your doctor if you have a medical condition.

Dang Bars vs Kiss My Keto Bars: Which Is More Ketogenic?