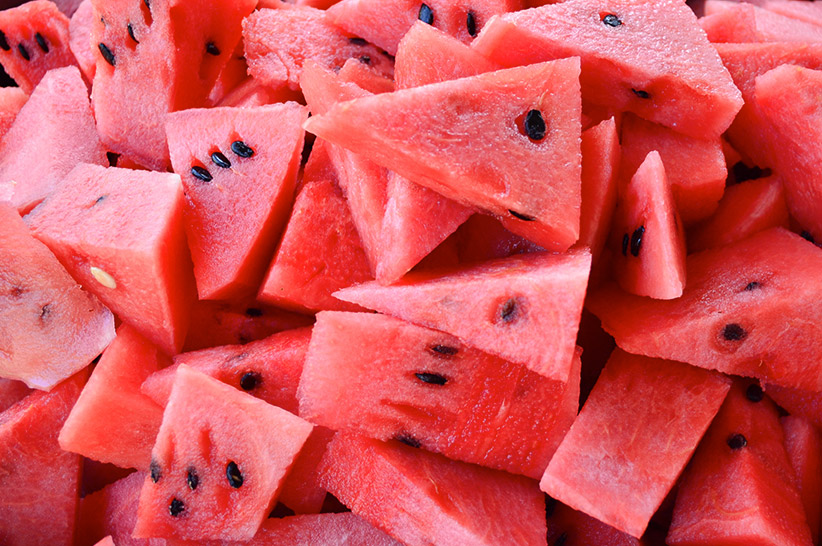 As its name implies, watermelon consist mostly of water (92 percent), and the rest of it is mainly carbs (7 percent).

But does watermelon have a place in a ketogenic diet? Keep reading to find out and also to learn more about watermelon nutrition.

How Many Carbs in Watermelon?

As you can probably tell, watermelon is a high-carb fruit, at least from a keto standpoint. Generally speaking, food needs to have 5-10g net carbs per serving to really be keto friendly. A good example is cucumbers that have only 3.1g net carbs per 100g.

Another problem with watermelon is the type of carbs it contains. Like most fruit, the carbs in watermelon are mostly in the form of simple sugars. The most prevailing simple sugar in watermelon is fructose followed by glucose and sucrose. All three sugars raise blood glucose levels to different extents.

How many calories in watermelon?

Watermelon is considered a low-calorie food. One wedge provides around 85 calories, which is 4% of the average recommended daily calorie intake. However, from a keto point of view, these calories will are actually too much.

That’s why it’s not recommended to eat watermelon and many other fruits on a keto diet. These foods provide the majority of their calories in the form of carbohydrate. On keto, you should eat either low-carb fruit and vegetables or high-fat food.

Watermelon is considered a somewhat nutrient dense food according to Dr. Fuhrman’s ANDI scores 2. Watermelon provides over 30% of the DV for vitamins C and A. Vitamin C is an important antioxidant vitamin, while some forms of vitamin A in watermelon also function as antioxidants. Antioxidant vitamins are proven to protect against oxidative stress 3.

Other than vitamin C and A, watermelon doesn’t really provide much of other nutrients. A serving of watermelon provides less than 10% DV of B vitamins, vitamin E, and the minerals calcium, iron, magnesium, potassium, and copper. Watermelon is also not a very good source of fiber, providing only 4% of its DV per standard serving.

Watermelon also provides 3% of the DV for protein. And while watermelon is not a source of complete protein, it does contain some non-essential but health-promoting proteins like L-citrulline. Research shows that L-citrulline from watermelon boosts nitric oxide production 4. Nitric oxide is a gas that promotes the relaxation of blood vessels and, in this way, increasing blood flow and improving cardiovascular health.

Can You Eat Watermelon on the Keto Diet?

You shouldn’t eat watermelon on a keto diet because it’s relatively high in carbs. However, many keto dieters will still eat watermelon in small amounts. If you can stick to a cup of watermelon a day, you just may be able to stick to your daily 20-50g a day carb limit.

Still, we recommend sticking to low-carb keto fruit, low-carb vegetables, nuts, seeds, and other foods recommended on the keto diet. This will help you stay within the recommended keto macros while also ensuring you’re getting the nutrition you need to stay healthy.

If you still plan to eat watermelon on a keto diet, you’re probably curious to learn if this fruit provides any health benefits. Below are just a few of science-backed health benefits of watermelon. 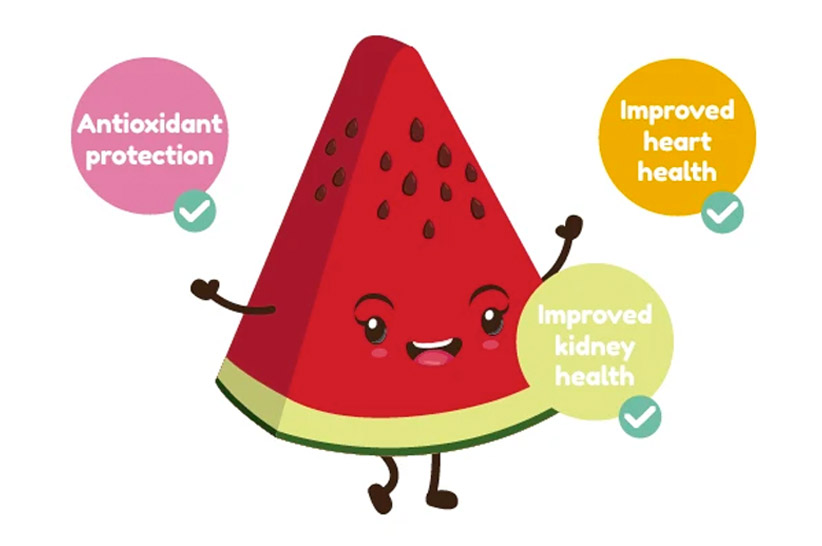 Animal studies found that watermelon can help prevent kidney stones 6. This effect was attributed to steroids and alkanes in watermelon. Besides preventing kidney stones, watermelon also has a mild diuretic effect, meaning it makes you pee more. This can be good for bladder health and can even reduce edema.

Regular watermelon consumption can help reduce high blood pressure. This is due to the amino acid L-citrulline found in watermelon and that converts to L-arginine in the body, a precursor to nitric oxide production.

How to Eat Watermelon on Keto?

While you’d be best off avoiding watermelon on a low-carb and ketogenic diet, there are a few ways to include it and stay in ketosis:

Don’t eat more than 1 cup of watermelon a day and you should be able to stay within your macros. Also, keep in mind that the exact number of carbs in a cup of watermelon can vary based on how much water it contains.

2. Add it to your salads

Some salad recipes call for watermelon as a refreshing ingredient. Take for example this low-carb watermelon salad with feta cheese. It has only 5g net carbs per serving and plenty of fat and protein.

3. Mix it with low-carb fruit

If you like a bowl of refreshing watermelon cubes in the summer, then try mixing it with berries, starfruit, and other low-carb fruits. Make sure to calculate the exact macros for your fruit bowl with watermelon to stay within the recommended carb limits.