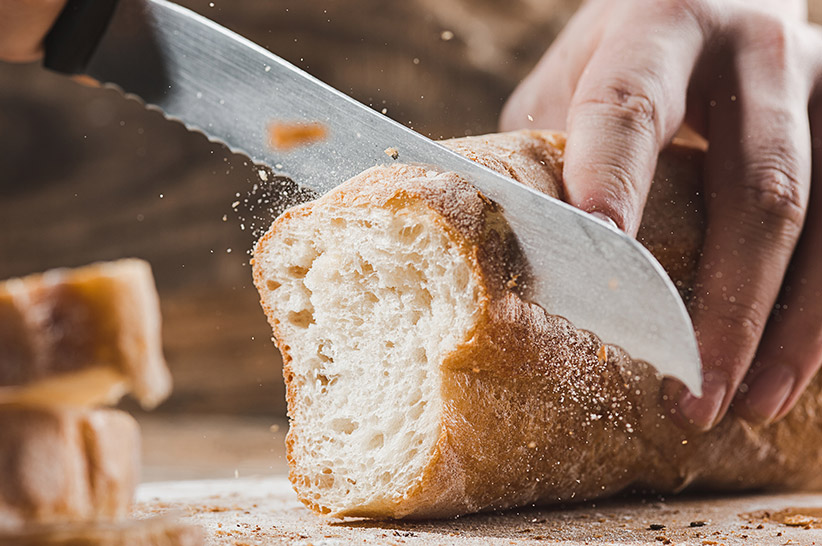 A slice of bread has 15g of carbs on average. On a keto diet, it’s best to stay away from all bread types. Consider keto bread alternatives made from low-carb flour.

Most bread is made from wheat flours and is one of the most prominent sources of carbohydrates. On average, a slice (28g) of bread provides around 15g of carbohydrates – which is defined as a “one carb serving.” However, carbs in bread vary depending on bread type. But not only that, a bread’s nutritional profile varies greatly from one loaf to another.

If you’re following a keto diet, you’re likely interested to know more about carbs in bread and other nutrition facts about bread. Keep reading to learn if and how bread can fit into a low-carb eating plan such as keto.

Bread is a type of food made from a dough containing flour and water. Most often, a leavening agent such as yeast and baking soda is used and the dough is baked. There are hundreds of different types of bread made from a variety of grains and through different preparation methods. Below are just a couple of the most well-known examples:

White bread encompasses a broad category of breads made from milled wheat that had the outer layers removed, i.e. refined grains. Milled flour does not contain the bran and has a white color. It also has a longer shelf life but not many vitamins, minerals, antioxidants, and no fiber. In the US, white bread is often referred to as sandwich bread. Examples of white breads include plain loaf, ciabatta, and baguette.

Most bread today is leavened with baker’s yeast or baking soda. But during early bread-making days, humans made bread using sourdough. Sourdough is made using naturally occurring lactobacilli and yeast in wheat. Sourdough bread has a mildly sour taste and a longer shelf-life than other breads. It also has unique nutritional properties, and there’s evidence that it’s better for glycemic control than other breads 1.

How Many Carbs in Bread?

Bread is a significant source of carbohydrates in many countries. Along with rice, it accounts for 40% of the calories consumed worldwide 3. The exact amount of carbs in a serving of bread (one slice) varies greatly depending on bread type, but the average is estimated around 15g per slice. Below are the exact carb amounts in different types of bread.

The exact type of carb in these breads also varies. Bread made from refined white flour contains many of the same complex carbs as whole grain bread. However, the lack of fiber in this type of bread means that it is digested quickly, leading to blood sugar spikes. Fiber is an important type of indigestible carbohydrate essential for normal overall health and functioning 4.

Nutrition facts – one slice of bread

How many calories in bread?

With all that taken into account, how many calories are there in bread? As always, it depends on the type. For example, a slice of commercially-prepared whole wheat bread provides around 69 calories. Of these, 66% are coming from digestible carbohydrate, 12% from fat, and 20% from protein.

On the other hand, white bread provides 66 calories per slice, of which 77% is from carbohydrates, 10% from fat, and 10% from protein.

Some breads may also contain ingredients such as milk, butter, eggs, oil, nuts, seeds, and legume flours. This will greatly impact their overall nutritional profile, including calories. Brioche, which is a type of French bread with butter and eggs, provides 150 calories in a slice.

Bread is an important food staple across the globe. When eaten in its unrefined form, it’s a great source of fiber and other nutrients. For example, a thick slice of homemade whole wheat bread provides the following:

White bread may also be fortified with important nutrients such as folic acid and iron. Still, most studies show that replacing whole grain bread with white bread reduces your risk of metabolic diseases 5. Whole grain bread is more satiating due to its higher fiber content and slow digestibility. White bread also provides only empty calories and leads to blood sugar spikes, which is a known cause of overeating and hunger pangs.

Can You Eat Bread on the Keto Diet?

Eating whole grain bread on a well-balanced standard diet is perfectly ok. But on keto, bread is not allowed and defeats the purpose of this diet. The ketogenic diet is a low-carb diet, meaning that it excludes foods that are high in carbohydrates such as bread. But why is this so?

Well, the ketogenic diet is meant to put the body into ketosis, i.e. boost ketone production. The word “ketogenic” means ketone generating. The only way to put the body in a state of ketosis is to reduce carbohydrate intake low enough so the body cannot derive energy from this macronutrient. As a result, it looks for other energy substrates such as fat and produces ketones in the process to help fuel the brain (the brain is one of the rare organs that cannot use fat for fuel).

Because bread provides a significant amount of carbohydrates even at small serving sizes, it is not practical in helping lower carb intake to the recommended 20-50g/day on a ketogenic diet. That’s why many keto dieters make bread from non-wheat flours to help lower their daily carb intake (more on that later). Others simply stick to low-carb food such as nuts, seeds, avocados, spinach, and cucumbers.

While bread is not allowed on keto, that doesn’t mean it’s inherently bad. As already explained, whole grain bread is a good source of fiber and nutrients. If eaten alongside a well-planned standard health diet, bread in its whole grain form can contribute to good health. Below are examples of health benefits associated with whole grain bread. 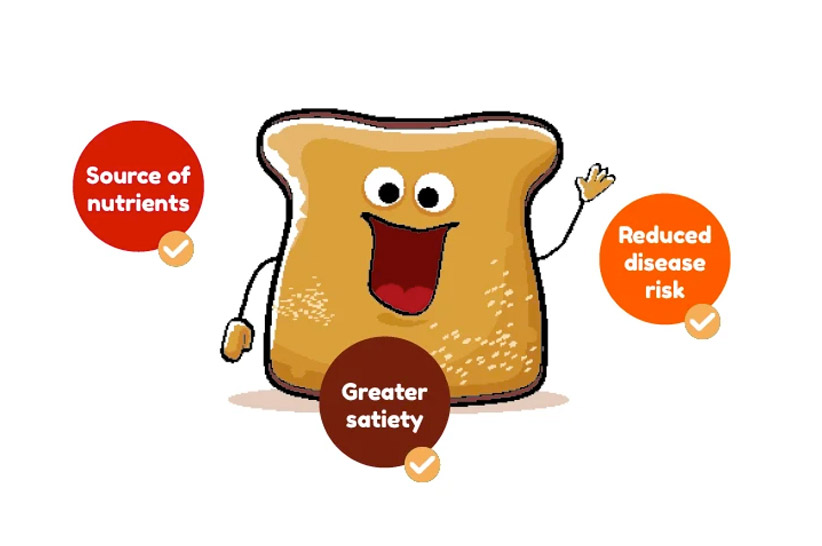 A source of nutrients

Whole wheat bread is a good source of selenium, a trace mineral that is important for the production of antioxidant enzymes called selenoproteins. Selenium is also essential for reproductive health, thyroid health, and DNA synthesis 6. Sprouted bread has even greater nutritional value because sprouting removes anti-nutrients, compounds that interfere with the absorption of nutrients. Sprouting also increases the number of certain nutrients such as vitamin C, vitamin E, and beta-carotene; however, it’s only in negligible amounts 7.

Public health research shows that consumption of whole wheat bread over refined sources of carbohydrates reduces the risk of several diseases and health outcomes, including 8:

This is likely due to higher fiber intake with whole grain bread as well as the added antioxidants found in unrefined grains. For example, fiber feeds god gut bacteria, which produce short-chain fatty acids like butyric acid when fermenting fiber. Studies show butyric acid protects the health of gut tissue 9.

Hunger and satiety play an important role in weight management. These responses to food intake depend a lot on blood glucose levels and your overall metabolic health. Blood sugar spikes caused by intake of refined carbohydrates, for instance, lead to greater insulin release and subsequent blood sugar drops that cause strong feelings of hunger shortly thereafter 10.

You can prevent this by switching to whole grain bread. Whole grain bread contains more fiber, which helps slow down the breakdown of starch in the bread. This leads to a gradual release in blood glucose. Fiber also creates bulk in the digestive system, and this also seems to contribute to greater satiety. However, switching to a low-carb diet is your best option when it comes to appetite control according to studies 11.

How to Eat Bread on Keto?

Eating bread on a standard keto diet is not allowed. However, you can eat bread on a cyclical ketogenic diet (CKD) and on the targeted ketogenic diet (TKD). Both versions of keto allow for occasional carb refeeding to help replenish glycogen stores. Here is how that works:

The CKD involves 5-6 days of standard ketogenic eating, i.e. restricting carbs to fewer than 50g a day. This is then followed by 1-2 days of eating up to 150g of carbohydrates a day. This helps replenish glycogen stores in the muscles and liver. It also kicks you out of ketosis temporarily. The proposed benefits of the CKD over the standard ketogenic diet include better workouts, greater muscle recovery and growth, and improved thyroid functioning.

On a TKD, you eat more carbs only around your workouts. This is best suitable for highly athletic folk. Like the CKD, the TKD also helps replenish muscle glycogen, which is important for muscle recovery following rigorous workouts. However, it isn’t really necessary as new studies show that you can get just as many benefits through keto-adaptation, which requires at least 6 weeks of being on a standard keto diet 12.

In both cases, the source of carbs doesn’t matter, so you can feel free to even eat white bread to replenish your glycogen stores. In fact, white bread may even be a better option on a TKD since it’s easier to digest and turn to glucose and glycogen.

However, if you want to follow a standard keto diet, then you should consider low-carb bread alternatives. These are often referred to as keto breads. Keto breads are simply breads made from nut flours such as almond flour, hazelnut flour, and coconut flour. The most popular flour to make keto breads is almond flour.

Because almond flour is high in fat, low in carbs, and does not contain gluten, it behaves differently than wheat flour during baking. Using yeast won’t work with almond flour, so you should use baking powder and eggs instead. Another low-carb alternative to wheat bread is cloud bread, an egg-based bread with cream of tartar.