Home → Articles → Keto Diet Basics → What Is the Difference Between Keto and Low Carb?

The currently known definition of a low carb diet is that it focuses on keeping the daily carbs under 70 grams and gives more importance to protein and other nutrients. There are several types of low carb diets, and keto diet is one of them.

However, the significant difference between a traditional low carb diet and keto diet is that the ketogenic diet strictly limits carbs to be under 20-35 grams maximum, moderate protein, and at least 60-75% of the keto diet is made up of healthy fats.

Low carb diets have seen enormous growth in popularity over the past decade or so and it looks like the trend is here to stay. The basic principle of this diet is to keep your daily carbs under 70 grams, and the diet focuses on eating more protein, and healthy fats.

Low carb diet doesn’t have any strict definitions as to exactly how much carbs you must consume per day, and how much of other things you can eat.

Several different types of low carb diets have emerged, some new, and some that existed for a long time like the ketogenic diet. We’re going to discuss some of the popular low carb diets of today and how they differ from the keto diet.

As the name states, this diet is all about lowering carbs and increasing healthy fats. The LCHF diet focuses on eating healthy and unprocessed foods like low carb vegetables, nuts, and fish while restricting the intake of processed and high carb foods like rice, pasta, and potatoes.

A significant difference between this diet and the ketogenic diet is that LCHF doesn’t focus on macronutrients and it also allows a maximum carb consumption of 100 grams per day whereas keto diet only allows between 20-35 grams of carbs per day.

The low carb high-fat diet is suitable for those who want to have more flexibility over the number of carbs they can consume per day without worrying about strict macros.

One of the most popular diets in the world, the paleo diet is also known as the Paleolithic diet, meaning the diet of our ancestors. It’s said that this is how they ate before people adapted to climate change, control of fire, and before they began using stone tools 3.

The concept of this diet started in the 1970s, but its popularity grew upon the release of a book dedicated to the paleo diet by Loren Cordain in 2002. Since then it’s also gained names such as the “caveman diet” and “Stone Age diet.”

The goal behind this diet is that our health would improve significantly if we go back to the way our ancestors ate and avoid eating processed foods.

The primary focus of paleo diet isn’t to eat low carbs but to rather eat more healthy like how our ancestors did which makes it end up being low carb eventually.

This diet is named after Robert Atkins, cardiologist, and author of the bestselling Dr. Atkins’ New Diet Revolution book 5. He promoted a high protein and low carb diet and urged his patients to “eat the hamburger and throw away the bun.” His theory was dismissed by the mainstream experts and the medical community, so he took it directly to the public and gained enormous support from them.

The Atkins diet is divided into four stages:

This is the vegan version of the Atkins diet. The focus of this diet is to consume high protein and/fat plant-based foods.

It tends to have a little bit higher carbs than the traditional Atkins diet, but still low enough to be considered a low carb diet. A scientist developed it from the University of Toronto, and he also did a six months study to prove the effectiveness of Eco Atkins diet.

The ketogenic diet is a type of low carb diet that focuses on eating high fat, moderate protein, and low carbs. It makes your body run on fat for fuel rather than glucose. Although keto diet is has gained so much popularity for weight loss, it was initially created to treat epilepsy in children.

Dr. Walter was the one who first introduced ketogenic diet to the world in 1921, and he did so to treat children with epilepsy. Before the keto diet came into existence, fasting was being used as a powerful treatment for epilepsy 8.

When we fast (or starve), the brain forces our body to run on ketone bodies produced by the liver instead of glucose and this process is called ketosis. The increase of ketones (ketonemia) during fasting was found to be beneficial for epileptic children. Thus Dr. Walter created the keto diet as an alternative method to mimic the effect of fasting.

This is the original keto diet Dr. Walter introduced in 1921. This version of keto diet has a 4:1 macronutrient ratio which means 90% of it will be from fats and 10% from protein and carbs.

This version is known as the standard keto diet, and it’s the most popular one of them all. MCT keto diet has 60-75% fats, 20% protein, and 5% or fewer carbs. It’s proven to be more effective because it produces more ketone bodies than the traditional LGT keto diet 9.

The Modified Atkins Diet we discussed earlier is also a type of ketogenic diet. People who’re on this diet like the flexibility it gives them and the fact that it’s easily adaptable. This type of keto diet usually calls for 75-80% fat, 17% protein, and 3% carbs 10. However MAD requires close monitoring to achieve and stay in ketosis.

The main difference between the ketogenic diet and other low carb diets is that only keto diet can help you achieve sustainable nutritional ketosis. Most of the benefits of the keto diet are from ketosis, so keto diet has that advantage and the advantages of low carb.

Not all low carb diets focus on eating high fat, and keto diet usually calls for at least 60-75% fats.

If it weren’t for this, we would have never had the ketogenic diet. Fasting metabolism helped treat epilepsy and Dr.Walter created the ketogenic diet to mimic the fasting metabolism (ketosis) in 1921. The keto diet has a lot of studies to support its ability to treat epilepsy, even in cases where other treatments like anticonvulsant drugs failed 10. 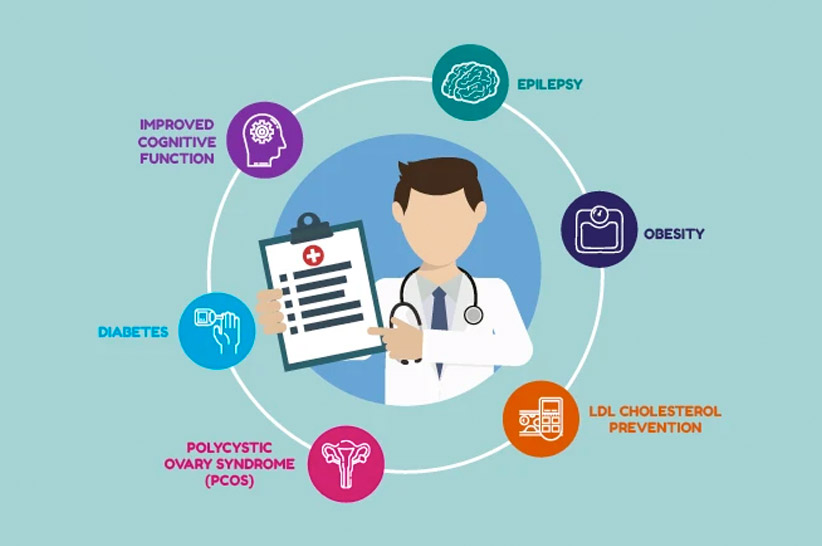 Unlike many other types of diets, the ketogenic diet has a decent number of human trial studies that support its effectiveness to help lose weight in overweight and obese participants 11,12. For instance, a 2016 study found out that low-calorie ketogenic diet helped to lose weight, especially abdominal fat, in obese participants than the standard low-calorie diet 13.

Some weight loss studies have found that the keto diet not only helps to lose weight but also lowers LDL (bad) cholesterol level which can help prevent the risk of cardiovascular diseases.

Low carb diets, including the keto diet, have been found to be beneficial for treating diabetes 15.

Both keto diet and other low carb diets tend to offer enhanced mental clarity and general improvement in cognitive function.

Risks and side effects

Low carb diets such as the ketogenic diet are diuretic which means you’ll lose a lot of electrolytes in your urine. The sudden transition of going from a traditional high carb diet to a low carb diet would also have its set of adverse effects known as the carb withdrawal symptoms. When this happens, your body may start showing flu-like symptoms often described as “keto flu.”

Here are some of those side effects:

How to prevent or minimize side effects

Keto flu and/or low carb diet symptoms can be avoided by doing the following:

Which one is the easiest to do: keto or low carb?

Both keto and other low carb diets have their sets of benefits and drawbacks. That said, the easiest will be the one you’re willing to pick up as a lifestyle rather than something you’re hoping to quit as soon as you reach your weight loss goal.

You could try both for a month and see which one seems more sustainable for you.

One of the reasons why a lot of people in the keto community experience faster and significant fat loss with the ketogenic diet is because it keeps them feeling more satiated for longer. This makes a lot of them practice and reap the benefits of intermittent fasting like OMAD keto.

Overall, both low carb and keto diet can help with weight loss, but the before and after results of ketogenic diet seems to speak louder in action.

Plain Low Carb vs. Keto: Which One Is Better Overall?

The ketogenic diet has proven records of its ability to help various health conditions like epilepsy, Alzheimer’s, cardiovascular diseases, and more. It’s also been found to offer faster weight loss than normal low carb diets. Thus keto diet may be something you’d want to consider if you’re looking to see some significant weight loss changes and health improvement in your life.

Other low carb diets might be best if you’re not in a rush to see results in weight loss or health improvements but are looking for a diet that’s more flexible and less restricted.

Both keto diet and other low carb diets are focused on keeping the carbs low which means you will have the health and weight loss benefits from both. As stated above, the ketogenic diet is your go to if you want faster weight loss and/or if you’re looking to improve a specific health condition.

Low carb diets are flexible and more adaptable as a lifestyle change; however, you may not know which one works best for you until you try them all out. Another downside of other low carb diets is that you may not be able to experience the full benefits of being in ketosis.

Perhaps you can try the ketogenic diet for a few months and then transition to the general low carb high-fat diet for the long run.