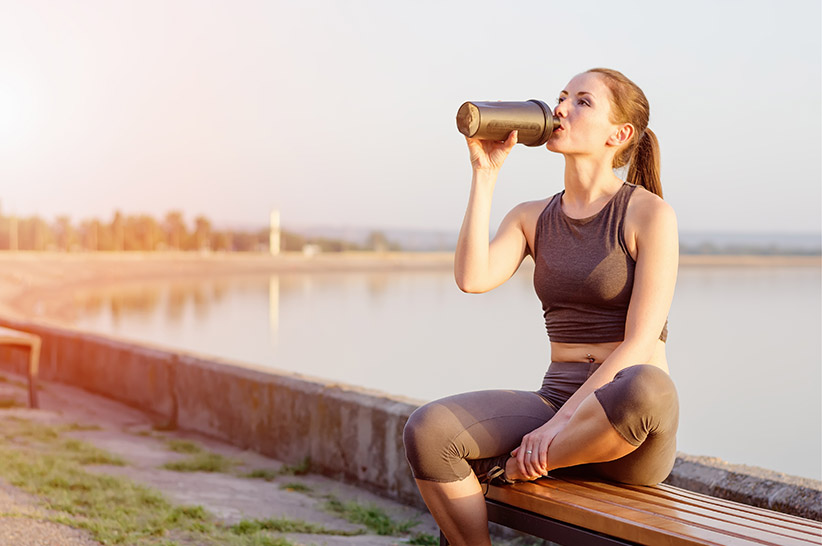 Ketone drinks are supplements that contain exogenous ketones and are sold as the shortcut to achieving nutritional ketosis even during the presence of glucose in the blood.

Your body would usually go through the state of ketosis when ketones are produced as a result of a low carb diet, fasting or starving. Ketosis has been proven to have many health benefits including weight loss, improved physical and cognitive performance. Ketone drinks are often targeted for athletes and those who practice intense workouts.

What Are Ketone Drinks?

Your body has been using glucose as its primary energy source all these years. Now when you suddenly deprive it of glucose in situations such as fasting, starving or when you practice a low carb diet like the ketogenic diet, your brain will eventually force your body to use stored fatty acids for fuel. It does this by converting the fatty acids to organic compounds known as ketone bodies. The process of your body metabolizing ketones for energy is known as ketosis 1. Achieving the state of ketosis via ketogenic diet is known as nutritional ketosis.

The primary ketone body involved in ketosis is called beta-hydroxybutyrate. Ketone bodies have been found to produce adenosine triphosphate (ATP) compared to glucose which is one of the reasons why it’s often referred to as “super fuel.”

Athletes and those who practice intense workouts often look for ways to increase their energy and performance levels via energy drinks, supplements, and energy bars. This reason along with the enormous growth of the keto diet over the years has given birth to ketone drinks.

As stated above, ketone bodies are naturally produced by your body when it’s running low on carbs for whatever reason. These are called endogenous ketones because they’re usually produced inside your body.

Ketone drinks and supplements such as ketone esters and salts are known as exogenous ketones because they’re man-made and produced outside of your body. They’re marketed and sold with the claim that they can put your body in ketosis within a matter of hours even if there’s glucose present in your blood. Ketone drinks and other exogenous ketone supplements are also claimed to offer the same health benefits that endogenous ketones have been found to provide.

How Does Ketone Drinks Work?

But before we discuss that, it’s important to mention here that there are two main types of exogenous ketones: ketone esters and ketone salts.

These are known as raw ketones that can be rapidly metabolized by the liver to be used as fuel. Their use in exogenous ketone supplements is limited due to their unpleasant taste. However, ketone esters have more valid research validate their claims.

These are exogenous ketones (often BHB) bound to salt and electrolytes to improve taste and absorption. Ketone salts are used in the majority of the exogenous ketone drinks and supplements.

As discussed earlier, beta-hydroxybutyrate is one of the major ketone bodies that your body produces in the absence of glucose. Bhb is also credited for many of the health benefits associated with ketosis. A 2018 research paper states that 100 g of glucose yields up to 8700 grams of ATP (adenosine triphosphate) whereas 100 g of bhb can produce up to 10 500 grams of ATP 2.
ATP is known as a primary energy carrier involved in many cellular functions 3. Since BHB has been found to produce more ATP than glucose, this is likely to be the main reason why ketone drinks claim they can optimize performance because they contain bhb.

When Should I Take Ketone Drinks?

Each brand would have their instruction on when, how, and how much to take their exogenous ketone supplements. However, in general, it’s best to consume ketone drinks 30 minutes before exercise, in the morning, or when you’re traveling. Also, you can usually take the ketone drinks in water or any low carb drinks such as coconut water, almond milk, coffee, and shakes.

1. Ketone Ester and Ketone Salts (Ketone Drinks) are not the same.

Although both ester and salts are exogenous ketones (made outside the body), ketone esters are raw ketones (beta-hydroxybutyrate) whereas ketone drinks have ketone salts which have a combination of BHB, sodium, magnesium, potassium, and calcium. The main reason why ketone esters are avoided is that of their unpleasant taste.

2. Ketone drinks may have more ATP.

As discussed above, the ketone body beta-hydroxybutyrate (bhb) is said to have more ATP than glucose. Since most ketone drinks have bhb as their main ingredient, it could mean that they can increase the level of ATP in the body which in turn can maximize performance.

A 2016 study conducted on rats found that exogenous ketones may help achieve ketosis 4. In this 28 day study, the rats received a daily 5-10g/kg dose of one of the five ketone supplements they were assigned to. The results revealed that administration of ketone supplements rapidly increased blood ketone levels without any dietary restrictions.

Ketones have been found to possess appetite suppressing properties which is one of the benefits of keto diet because it naturally increases ketones. A 2018 study found that increasing ketones via ketone drinks may directly suppress appetite 5. In this study, 15 participants with normal weight followed an overnight fast and then consumed either 1.9 kcal/kg of ketone ester drink or isocaloric dextrose drink. Both drinks had the same taste, color, and volume.

Many people experience keto flu on the ketogenic diet due to sudden carb withdrawal and loss of electrolytes. These symptoms can include brain fog, dizziness, fatigue, headaches, vomiting, and irritability. As stated earlier, ketone salts are usually made with beta-hydroxybutyrate and electrolytes such as sodium, potassium, and magnesium. This is one of the reasons why many sports drinks mention electrolytes on the label. Since ketone drinks contain these electrolytes, they may help reduce keto flu symptoms.

For example, in a 2018 study, six healthy participants received 0.5 g/kg of bhb ketone salt supplement with sodium and calcium. The study found out that there was a significant increase in blood ketone level between 2.5-3 hours after consumption. There was also a notable difference in electrolyte level 6.

As stated earlier, ketone drinks may increase exercise performance in athletes by increasing the level of ATP via beta-hydroxybutyrate. A 2017 research paper also concludes that exogenous ketones can improve performance during exercise, especially in trained individuals 7.

One of the well-known benefits of the ketogenic diet is that it can improve cognitive function mainly due to the elevated level of beta-hydroxybutyrate. Keeping that in mind, ketone drinks may also help improve cognitive performance.

8. Get back into ketosis.

If you fall prey for occasional cheat days on the ketogenic diet and/or if you need to consume some extra carbs for endurance exercises, consuming ketone drinks may make it easier to get back to ketosis.

9. May be an alternative for those unable to practice keto.

Some health conditions may make it impossible to be on the ketogenic diet. Ketone drinks may help reap some of the ketosis benefits in those cases.

10. May help with intermittent fasting.

Best suitable for athletes and those who perform high-intensity workouts.

Exogenous ketones are primarily targeted towards athletes and those who practice intense workouts on a regular basis. Most studies conducted on exogenous ketones say they increase ketone levels and improve performance. Hence, those who fall in this category are more likely to benefit from ketone drinks.

Suitable for those who’re unable to practice keto diet.

As stated earlier, some people cannot practice the ketogenic diet due to certain health conditions and ketone drinks might be an alternative to induce ketosis in such cases. More evidence is needed to confirm this, but it’s worth mentioning the possibility.

Quick bounce after a cheat day.

Since most exogenous ketone supplements claim to induce ketosis without the necessity to follow the keto diet, those who do practice the diet might find it beneficial on the occasional cheat days.

Because ketone drinks contain ketone salts, they usually have a much better taste than ketone esters.

Ketosis and nutritional ketosis are not the same

A lot of the health claims credited to exogenous ketones are referenced by the health benefits of the ketogenic diet or ketone esters. Elevating the level of blood ketones is not the same thing as achieving nutritional ketosis.

Keeping the above point in mind, there’s a considerable lack of evidence related to ketone salts when compared to ketone esters. One can say they both increase blood ketones, but ketone esters are still considered as pure ketones and have more research done on them.

A 2017 study conducted in healthy adult males found that ketone salts increased fat oxidation but impaired high-intensity exercise performance 8. In this study, ten healthy adult men came to the lab in a fasted state and consumed either 0.3 g/kg of Beta-hydroxybutyrate via ketone salts or a flavor matched placebo 30 minutes before cycling exercise. They found that blood ketone levels increased from baseline and fat oxidation was also more significant than the control. However, the average time trial power output was 7% lower in the ketone salt group.

Ketone drinks are exogenous ketone supplements that have the potential to increase blood ketone levels and induce ketosis related benefits such as improved performance during exercise and appetite suppressing properties.

They’re best suitable for athletes and those who regularly do intense workouts. Ketone drinks are also an option for those who cannot practice the ketogenic diet due to certain health conditions, and they may make it easier to get back into ketosis after a cheat day. We highly recommend practicing the ketogenic diet for the full benefits of nutritional ketosis and using exogenous ketone drinks when there’s a need to use it.

We may see more reliable studies on various health claims related to ketone drinks as their popularity continues to grow, especially studies on ketone salts. This would also help establish the safest dosage and any potential undiscovered side effects.