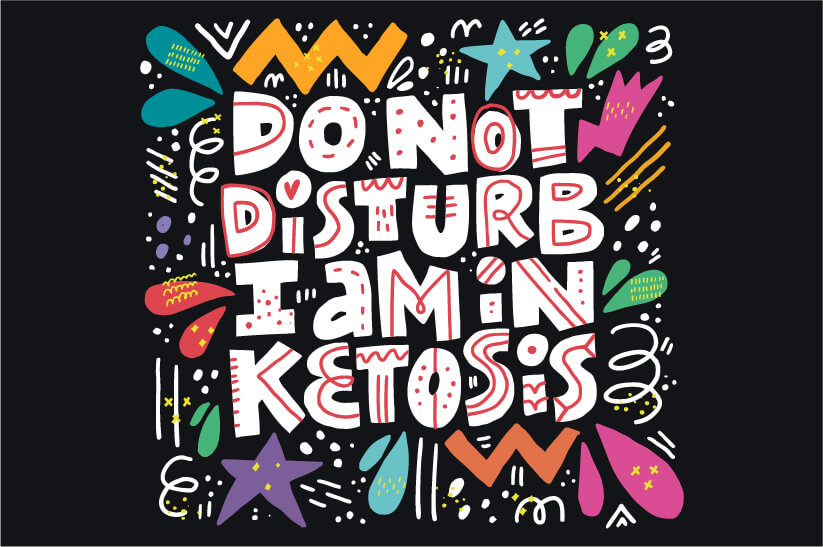 The first goal of keto is reaching ketosis, a metabolic state in which the body starts using fat for fuel instead of glucose. Once you’ve made this metabolic shift, expect a host of benefits to come your way: weight loss, sustained energy, and better overall health.

But how to tell if you’re in ketosis?

The surest way to tell is with a simple urine test strip. You can find ketone test strips online and your local pharmacy. A reading of 0.5-3.0 mmol/L means you’re in “nutritional ketosis.” However, it’s also normal to have low readings after a period of keto adaptation, meaning your body becoming so adapted to ketosis that fewer ketones end up as waste in urine.

Another way to tell if you’re in ketosis is by checking for the signs and symptoms.

Below are 9 of the most commonly experienced ketosis signs and symptoms, along with tips on how to treat the more uncomfortable ones.

Also called keto breath, this particular type of bad breath is a hallmark symptom of ketosis. People describe ketosis breath as fruity, sweet, and resembling nail polish remover. It’s mainly a result of the body getting rid of extra acetone (a ketone body) through the lungs.

While it can be embarrassing, having bad breath on keto means your diet is working.

Keto breath also tends to go away on its own once you become “keto-adapted“, which essentially means that your body has started using ketones more effectively and less end up expelled through the lungs.

It’s not uncommon to lose 5 pounds after only one week on the keto diet. But before you get too excited, know this is mostly water weight and that real fat loss will come later.

But now you’re wondering, “why would glycogen depletion cause water loss?”

Because glycogen is bound to water (glycogen is three to four parts water), we inevitably lose water along with our glycogen stores.

The good news here is that glycogen depletion sets the stage for ketosis. Having no glycogen signals your body to make the switch from using this glucose reserve to using fat.

Despite obvious signs of ketosis, most dieters still ask “Am I in ketosis or am I just imagining things?” Testing for ketone in blood, urine, or breath can remove any doubt.

You can check for all three by using special tests:

Low energy on keto is another ketosis symptom. Its usual cause is the infamous keto flu.

Just like regular flu, keto flu causes uncomfortable symptoms like fatigue. But unlike the real flu, this one’s not caused by a viral infection, but by electrolyte imbalances 3.

We already talked about keto causing water loss. Well, if you leave that unchecked, you are putting yourself at risk of these imbalances.

Electrolytes are mostly minerals that regulate fluid levels, heart rhythm, nerve signaling, and countless other bodily processes. They include sodium, potassium, and magnesium. When they become imbalanced due to excess water loss, we can end up feeling tired and ill.

With water loss and electrolyte imbalances, you may also notice that you’re thirstier than usual. This is because you’re probably dehydrated. Studies show dehydration is an early side effect of the keto diet 4.

Many keto-ers notice they’re less hungry once in ketosis. There are two reasons for this:

Insulin is responsible for helping your cells absorb glucose; with less glucose circulating your system, there’s less need for insulin.

Ketones also seem to directly affect the levels of hunger hormones, but researchers are not sure why this happens.

Whatever the reasons, a reduction in appetite is bound to help with weight loss — and that’s a good thing for many dieters.

Constipation, diarrhea, and stomach ache can accompany ketosis in its early stages. But these are not a direct result of ketosis, and other problems could be the culprit.

Constipation, for example, can be a result of dehydration and electrolyte imbalances 9. You can also become constipated if you’re not eating enough fiber. Low overall food intake can affect bowel movement frequency as well.

Diarrhea can also be a side effect of electrolyte imbalances. But on a keto diet, it’s most likely due to poor digestion or intolerance of fat 10. MCT oil can be another culprit.

Studies show that ketosis helps people sleep better 11, 12. Still, a lot of dieters swear they’ve been having trouble sleeping since going keto. So what gives?

Chances are your sleep problems are not caused by ketosis but by electrolyte disturbances, low glucose levels, and changes in gut flora.

Tackling each can help you get your well-deserved rest. Things you can do include drinking electrolyte-rich fluids, reducing carbs slowly, and taking probiotics.

Ketosis can be energizing and keep your focus razor-sharp, and all thanks to ketones themselves.

Ketones are a much more efficient cell fuel than glucose, using less oxygen and providing more energy 13. But it doesn’t end there: ketones seem to increase the size and number of mitochondria, the powerhouses of cells 14. This too can contribute to greater energy.

Of course, you don’t have to experience all of the above symptoms to be in ketosis. Ketosis can be fairly subtle initially for many, while leading to prominent symptoms in others. When in doubt, testing your ketone levels with test strips or other methods will help you know you’re in ketosis for sure.