Home → Articles → Keto vs Atkins: Which One is Better? 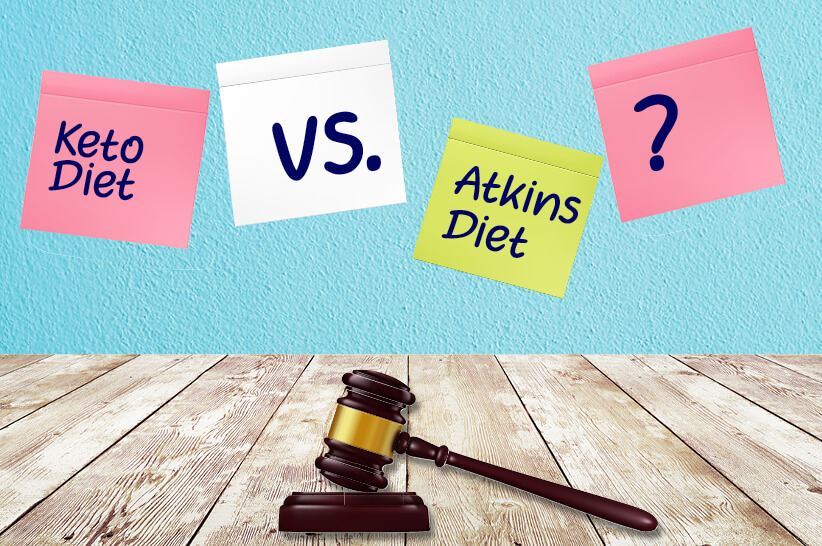 If you ever googled “low-carb diets,” you probably noticed that keto and Atkins are at the top of search results.

Maybe you even stumbled upon some keto vs Atkins discussions across forums. This isn’t at all surprising. Both are low-carb, high-fat diets people follow to lose weight and improve health. Which probably leaves you wondering:

Is the keto diet the same as Atkins?

In the world of low-carb diets, keto is at the very end of the spectrum. In other words, it’s the king of low-carb. Atkins takes a more moderate approach to carb restriction, although it may not seem that way in the beginning. These two diets are also made with different effects in mind and have completely different histories.

Want to learn more about both to see which one is best for you?

Here, we talk about the many differences between keto vs Atkins in great detail. We’ll go over the science behind each diet, take a look at their different benefits, and offer suggestions for which one might be best for you.

Is the Atkins diet a ketogenic diet? Or is it something else?
Formally known as the Atkins Nutritional Approach, medical experts classify this low-carb diet as a fad even though it’s been around for half a century and despite the fact it was developed by a physician, namely Dr. Robert Atkins.

Dr. Atkins, who was a cardiologist, began developing his namesake diet, mainly for weight loss, in the late 1960s. After careful research, he published Dr. Atkins’ New Diet Revolution in 1972, a book that kicked off decades of debate within the medical community 1. There, Atkins explains what he knows about carbohydrates and sets the rules that shape the Atkins diet. Since the book’s publishing, hundreds of  scientific publications have examined if low-carb diets can work for weight loss 2.

Like every low-carb diet, this one is based around eating fewer carbs and more fats and protein. Besides that, it involves several phases, beginning with a very-low-carbohydrate eating plan.

This is the original Atkins diet and is best if you want to lose weight quickly or have a lot of weight to lose.

Atkins 40 is the newer and simpler version of the classic Atkins diet. Its main principles are portion control and limiting net carbs to 40 grams daily. This one is best for people who need to lose only a little bit of weight. It’s also safe for pregnant and breastfeeding women because food choices are less restrictive.

Another great thing about Atkins 40 is that it does not come in separate phases, making it relatively easy to follow.

Start your diet with a limit of 40 grams daily net carbs. Then, add 10 net grams of carbs each week once you are 10 pounds away from your target weight (however, this is purely optional).

And as if that wasn’t enough, Atkins 40 allows for moderate alcohol intake (equivalent to one drink per day). Now you won’t have to skip Margarita Day.

Modified Atkins is very similar to keto. It’s called “modified” because it limits carb intake to a maximum of 20 grams per day, separating it from its classic cousin. And just like keto, you don’t need to watch your calories on this version.The only feature that sets it apart from the keto diet is that it allows for high amounts of protein.

Your meals on the Atkins diet should consist of:

About the Keto Diet

A low-carb diet that’s been in the spotlight for a decade or so is keto, which is also a high-fat, adequate-protein diet.

However, it’s been around for much longer than that.

Researchers developed the ketogenic diet (aka keto) in the 1920s to manage severe epilepsy in children, after studies found that limiting carbs causes ketosis, a known cure for epilepsy. It’s only recently that keto became popular for weight loss and better health.

But now you’re probably wondering, what’s the difference between a low-carb diet and a keto diet?

The main difference is that it causes ketosis — a metabolic state of enhanced fat burning and elevated ketones. Ketones are a compound that can replace glucose in many chemical reactions in the body, like serving as fuel for energy. The keto diet, ketosis, and ketones help with weight loss but also things like better brain health and a lower risk of heart disease and type 2 diabetes 3,4.

Other things keto can do for you include:

Like Atkins, the main principle of keto is carb restriction followed by higher fat intake. But there are many, many more intricacies to this diet.

Be warned that the keto diet is strict, especially when it comes to macronutrient ratios (macros).

Keto macros are based on research that shows your metabolism changes drastically when you eat less than 50 grams of carbs daily 5. 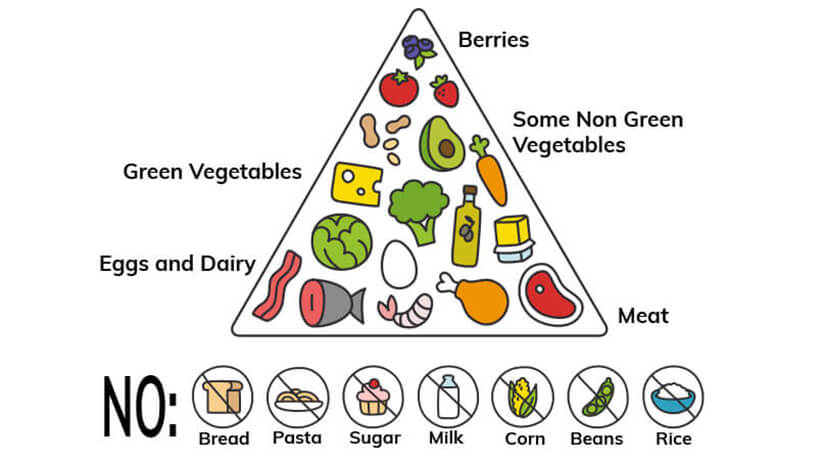 Eat this way and you’ll be in ketosis within a few weeks.

But how exactly does eating a certain way lead to ketosis?

Not enough carbs in your diet leads to drops in circulating insulin. In turn, decreased insulin brings about metabolic changes that discourage fat accumulation in the body. Besides that, after just a few days on keto, your glucose stores are too depleted to fuel the brain or other organs, so your body produces ketones as replacement fuel.

But ketosis is not the end goal of keto.

What you want to aim for is keto-adaptation, which is essentially your body becoming perfectly adapted to running on fat and ketones. What this gives you is consistent and long-lasting energy, an ability to maintain normal weight, and metabolic flexibility (which can make weight loss easier).

And now onto keto diet types:

What to Eat on Keto

Despite what you may have heard, there’s more to keto than eating bricks of butter with bacon on the side.

So, is it keto better than Atkins or vice versa?

If you’re feeling ambivalent about these diets, here’s a comparison of the two.

Studies show that both of these diets cause weight loss 6,5. However, research tends to favor keto, concluding that it provides more effective weight loss compared to Atkins. Since Atkins allows higher carb intake during later phases, the long-term metabolic changes associated with keto are not present, so your body continues to burn carbs for fuel.

The keto diet, on the other hand, means sticking to 30 grams of net carbs per day, turning your metabolism into a strict fat burner long-term. On the other hand, the higher carb and protein intake in the later phases of Atkins makes it more sustainable than keto for some people. 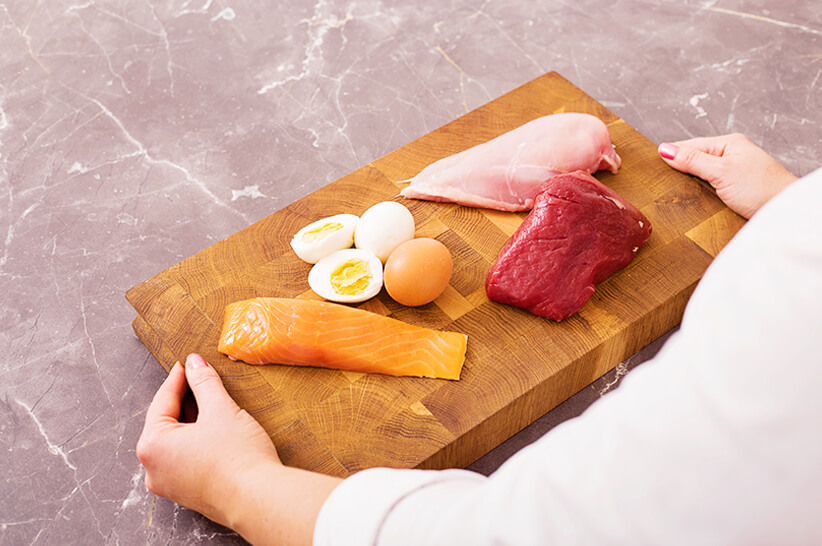 Atkins is primarily a low-carb diet, while keto is more accurately a high-fat diet. There’s great emphasis on fat intake on keto — in fact, up to 80% of your calories should come from fat on a keto diet, compared to 20 to 30% on other diets 7. The Atkins diet is also higher in fat than your typical weight loss diet, but not as much as keto.

Both diets focus on unprocessed foods. This is both for practical and health reasons. When you eat real, whole foods, it is much easier to estimate your macro intake. Unprocessed foods are also higher in valuable nutrients that support your health and keep potential deficiencies at bay (unlike more restrictive diets).

You need to avoid sugar, honey, and nutritive sweeteners on both diets because they tend to affect blood glucose. Instead, stevia and erythritol are good sweetener options. Both are non-nutritive, meaning they don’t contain calories (or contain a negligible amount) or affect blood sugar.

As you can see, both diets have their benefits and setbacks.

Still, a lot of people wonder, do you lose more weight on keto or Atkins?

Where research is concerned, keto may have a slight edge when it comes to weight loss. Keto can help you boost cognitive functioning, control (and sometimes even reverse) diabetes, and even help to prevent or fight cancer 8. There are also more studies showing keto is safe long-term 9,10. Unfortunately, there aren’t near as much studies on Atkins, but this is because it’s not used in the clinical setting like keto.

Despite the lack of research on Atkins, what we do know is that it’s more sustainable for most people, while keto is notoriously difficult to follow.

Keto vs Atkins: it’s a difficult question to answer. Both diets have their pros and cons. Current research shows that keto tends to be more efficient than Atkins for weight loss, but keto is also difficult to stick to, so Atkins provides a sustainable alternative.

The efficiency of Atkins also depends on your metabolic flexibility and goals. If you are able to effectively switch between burning carbs and fat for fuel, then Atkins may be ideal for weight management in the long run. Atkins also allows for more carbs, so you’ll find eating at restaurants easier and have a wider range of food options to choose from.

In the end, whether you should opt for keto or Atkins depends on how willing you are to stick to low-carb eating, as well as your metabolic flexibility. Keto is great in terms of efficiency, but some people find that a life without carbs is unbearable. If you’re still undecided, we suggest switching between keto and Atkins and finding what works best for you.