Home → Articles → How Many Carbs for Ketosis? 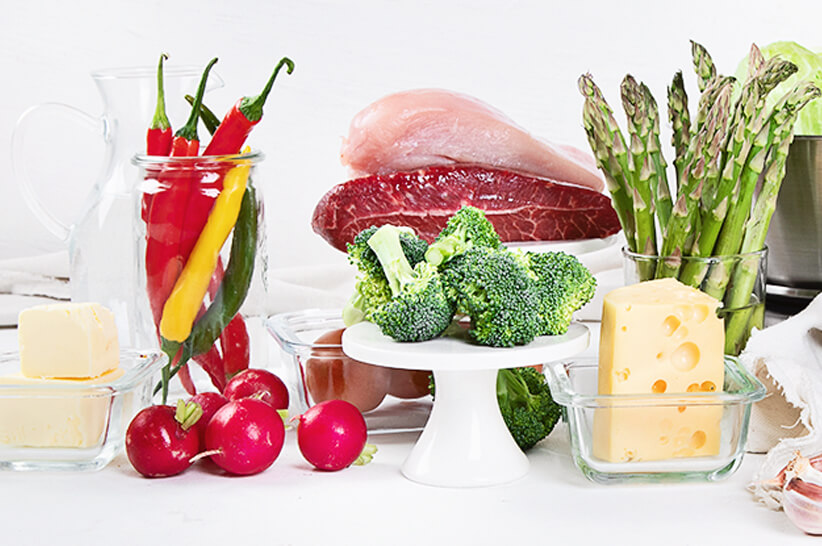 Ketosis is the goal of the keto diet. There are many ways to achieve this metabolic state but restricting carbs is the safest and most practical one. But now comes the question of how many carbs for ketosis?

There is a specific carb limit at which everyone can reach ketosis. It’s around 30 grams of net carbs per day. Stick to that limit, and you’ll reach ketosis within 3 days. However, most people respond differently to carbs, so their ketosis threshold can vary.

If you’d like to learn more about the amount of carbs needed to reach ketosis, read our article below. We also talk how to limit your carb intake and offer additional advice and knowledge on reaching ketosis.

Your body normally runs on the metabolism of glucose. Glucose is a simple sugar that your body breaks down from carbs. It enters your body’s cells with the help of a hormone called insulin from where mitochondria use it for energy production.

As long as your body is getting a steady influx of glucose, it prefers using it for fuel. But in the absence of glucose, like during fasting or on a keto diet, your body makes a ‘metabolic shift’ from glucose metabolism to ketone metabolism. Ketones are molecules that serve as an alternative to glucose. They include the following three:

The switch to ketone metabolism is characterized by a higher production of ketone bodies and enhanced fat oxidation. This change in metabolism functioning is called ketosis. It is the goal of the ketogenic diet. In ketosis, your body is burning fat to make ketones which boosts weight loss. But it also comes with many health benefits as well 1.

Besides weight loss, ketosis comes with a wide range of health benefits. Some of these benefits include the following:

Keto dieters also report increased mental alertness and greater feelings of well-being. Ketosis can also improve metabolic conditions like diabetes and PCOS. However, this effect is more due to the absence of inflammatory carbs than the presence of ketones.

How Many Carbs for Ketosis?

Most ketogenic diet guidelines recommend 40 – 60g per day 5. This amount also includes dietary fiber and the carbs included should have a low glycemic index (GI) of 50 and less. However, depending on the person, carbs can be limited to as little as 10 – 20g per day.

As you can see, carb intake on a keto diet is not strictly determined. Still, it needs to be low in order for you to reach ketosis. To make things a bit simpler, most keto dieters simply eat less than 50 grams of total carbs per day or 30g of net carbs per day. This golden rule seems to work well for everyone. Total carbs are all carbs in a food, including the fiber while net carbs are carbs minus the fiber.

However, if you’d like to adjust your keto carb limit to meet your specific needs and goals, we suggest using our Keto Calculator. It calculates your daily calorie expenditure and determines the amount of carbs you should eat based on your physique and activity levels.

Athletes and highly active people can eat a larger amount of carbs without being kicked out of ketosis. That’s because their muscles use up glycogen more quickly and in higher amounts than in sedentary folks. Athletes use something called “carb cycling” to stay in ketosis while following the keto diet. It involves periods of carb refeeding (up to 130g carbs) and periods of keto eating.

How to Eat for Ketosis

To meet your daily carb limit for ketosis, eating the right kind of carb foods helps. Keto guidelines lay out a few simple rules for you to follow that help you reach ketosis. Here is what those rules look like:

Low-carb foods include leafy greens, peppers, eggplants, cauliflower, and many others. These typically have less than 10 grams of net carbs per serving. They also happen to be low on the GI scale. The GI scale ranks food based on how they affect your blood glucose with the lowest rank being 0 (cheese) and highest 100 (pure glucose).

Of course, this rule really goes without saying. Nonetheless, we need to emphasize just how important excluding high-carb food on a keto diet is. High-carb foods include all grains, legumes, root vegetables, corn, most fruit, honey, sugar, and many other sweeteners.

For variety, keto dieters like to replace high-carb kitchen staples with their low or no-carb counterparts. Examples include using coconut, almond, and other nut flours instead of wheat flours. Coconut and almond milk are low-carb alternatives to dairy milk. Non-nutritive sweeteners like stevia and erythritol help you enjoy keto desserts without too many carbs.

And of course, you also need to eat plenty of fat on a keto diet to boost ketosis. Butter, sour cream, fatty cuts of meat, nuts, and olive oil all contain fatty acids your liver will use to make ketones. If you lower your calorie intake, your body also uses its own fat stores to make ketone bodies and this boosts weight loss. In case you want to learn more about what to eat on a keto diet, click on this article.

While eating few carbs on keto is the single most important thing for ketosis, your protein intake also matters. Your body is able to convert several amino acids from protein-rich foods into glucose. This process is known as gluconeogenesis 6. It’s a metabolic pathway that prevents hypoglycemia on low-carb diets. However, it can also kick you out of ketosis when protein intake is too high.

But how much protein boosts gluconeogenesis. Well, a moderate intake of 1g per day per kg of body weight is safe on keto as long as you are eating enough fat (65-80% of your daily calories). Going above that is detrimental to ketosis and is the same as eating high-carb foods.

A moderate intake of protein is also important for health and functioning. Protein builds and repairs tissue. It’s also essential for the production of enzymes, hormones, and immune system cells. Proteins are essential nutrients your body simply can’t live without unlike carbs. That’s why excluding them from your diet is not only unnecessary, but dangerous.

Restricting carbs to below 50 grams per day, boosting fat intake to 80% of your daily calories, and being moderate with protein is a sure way to reach ketosis. Once you are in ketosis, your body has made the switch from sugar burning to fat burning. Here is how ketosis takes place in your body on a low-carb diet:

In the first 1-3 days on a low-carb diet, your body turns to liver and muscle glycogen to increase blood sugar levels. Glycogen is the stored form of glucose and that your body uses up within just a few days of low-carb eating.

When glycogen stores are used up, your body is forced to turn to its fat stores for energy production. Some of these fats are used for energy while others are converted into ketones. The reason your body makes ketones is that some cells (e.g. brain cells) cannot run on fatty acids and need alternative sources of energy. However, if your fat intake is high enough, your body will be using dietary fat for ketone production instead of using its fat stores.

It takes time for your body to adjust to the changes in fuel availability. Some people take longer to adapt to the ketogenic diet, while others seem to make the switch effortlessly. But around 2-4 weeks is an average for most. When your body starts utilizing ketones and oxidizing fat for energy, you have officially become keto adapted.

In the process of reaching ketosis, you’ll also experience some side effects termed “keto flu.” It’s not a real flu and neither is it contagious. It’s simply a result of fluid and electrolyte loss from glycogen depletion. Glycogen is stored with lots of water. So, when your body uses up glycogen, it also uses up the water and electrolytes with it. The keto flu is easy to treat with fluid intake, electrolyte drinks, and rest.

While you can expect ketosis within the first week of carb restriction, a week-long keto flu may not be something you want to bear. That’s why keto dieters and keto experts came up with ways to speed up ketosis safely and effectively. To speed up ketosis, you can do one of the following things:

Intense exercise depletes glycogen stores within hours 7. In comparison, it takes up to two days to completely deplete glycogen stores with moderate activity levels. Make sure to keep eating the recommended daily amount of carbs to keep your blood glucose levels stable.

MCT is short for medium-chain triglycerides. These are types of fats that your body uses differently than any other fat. They don’t require enzymes or bile salts for digestion and instead get absorbed directly in the small intestine and transported to the liver. There, they’re used for immediate energy and ketone production 8. 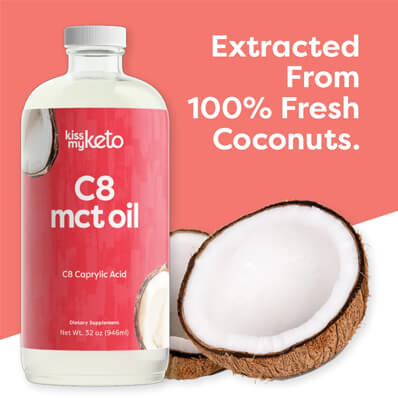 Exogenous ketones are dietary supplements designed to enhance ketosis. These ketones are made in the laboratory and available in powder and pill form. Studies show they help put you into nutritional ketosis within hours 9. Keto dieters use these to shorten the keto flu and to correct dietary mistakes on keto.

The lower your carb intake, the faster you’ll get into ketosis. If you are relatively healthy, you don’t have diabetes or suffer from a kidney condition, then eating 10-20 grams of net carbs per day can safely put you into ketosis within 2-3 days. Also make sure you are eating lots of fat to get enough energy and boost ketone production.

Knowing when you are in ketosis will help you determine if you’re following the keto diet correctly and if you need to adjust your carb intake. There are several ways to do this:

These are affordable and easy to use. Many keto-ers use them to test for ketosis throughout their keto journey. However, they may not be reliable beyond the first weeks of going keto. Your body initially excretes a large amount of ketones before being able to fully utilize them. As your body starts becoming keto-adapted, you can expect the amount of ketones released through urine to drop.

A fruity-smelling breath is a sure sign you are in ketosis. Some also describe this breath as smelling of nail polish remover. It’s the result of the breakdown of ketone bodies and their byproduct (acetone) being released through the lungs.

Feeling tired, achy, and nauseated in the initial days of a low-carb diet means your body is heading towards ketosis. It can take up to a week or two for your body to adapt to this change in metabolism, so these uncomfortable symptoms are only temporary.

Once the keto flu is over, you can expect an increase in mental and physical energy. Ketones are a more efficient source of energy than carbs which contributes to greater energy. You’ll also have fewer hunger pangs and won’t rely on food all that much to feel energized.

To get into ketosis, you need to eat around 50 grams of carbs per day and not more. However, if you are an athlete or highly active, you can increase your carb intake a little bit around workouts. Otherwise, stick to the first simple rule of keto eating and you won’t have to worry about getting into ketosis.

Besides knowing how many carbs are needed for ketosis, you also need to keep an eye on your fat and protein intake. Dietary fats help boost ketone production. Protein is essential for health but too much of it gets converted into glucose which is bad for ketosis.

To speed up ketosis, try MCT oil and exogenous ketones. You may also want to work out a bit to speed up this process. However, that’s really not necessary for ketosis and the choice is up to you. The bottom line with entering ketosis is restricting carbs. Everything else is a good addition that supports ketosis and keeps you in good health.