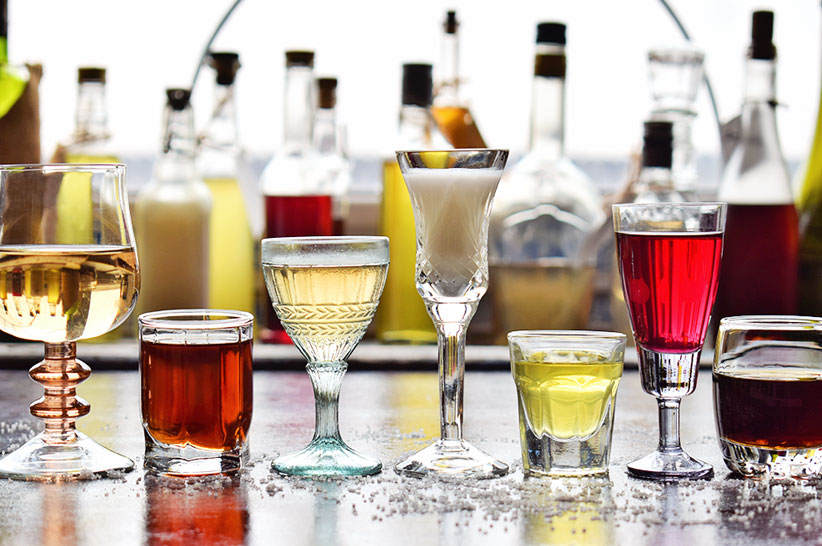 Alcohol on keto is a hot topic. You might be wondering if it’s possible to stay in ketosis while being able to enjoy alcoholic beverages. We’ve got you covered in this guide.

It’s not just food that affects your progress on keto, but also drinks. When it comes to the kind of beverages we ought to enjoy – one that comes to mind is alcohol.

Are there low carb alcoholic drinks that won’t stall your efforts?

Here’s what you should know about keto and alcohol. You’ll also find lots of keto friendly alcohol options along with their carb counts.

Does Alcohol Kick You Out of Ketosis?

Certain foods put you off ketosis. You already know that. The same thing applies to alcohol.

So here’s the answer:

Depending on the number of carbs in alcohol, you either stay in or get out of ketosis. The volume of alcohol you consume matters too.

Two things you should do as a keto dieter:

For the second bullet point, I know what you’re thinking – “Why do I still need to drink moderately even if I’m having low carb alcohol?”

The answer lies in the way your body processes alcohol. This leads us to the question… What does alcohol do to ketosis?

During ketosis, your body burns its stored fat to create ketones which become your alternative fuel source and bring about many health benefits 1.

But when you drink alcohol, your body detects alcohol as poison. Since alcohol is recognized as a toxic substance, your body gets rid of it first.

You don’t want to slow down ketosis, do you?

Another reason to think before drinking on keto is that alcohol contains empty calories. 1 gram has approximately 7.1 calories, and these calories contain no nutritional value 2.

Yes, we know – calories aren’t all that matter. But if you’re aiming for sustained fat loss, you shouldn’t completely ignore your calorie intake.

We would also like to make another important point:

Alcohol consumption affects your food choices. A study was conducted on college students which revealed that after drinking alcohol, students craved more foods. They were also less likely to eat healthy foods such as fruits and vegetables 3.

Drinking alcohol on keto won’t necessarily kick you out of ketosis. This is especially true if you pick low carb drinks. But at the same time, you need to be careful because of the empty calories and increased cravings you could get.

Lisa Richards, a nutritionist, published author, and creator of the Candida Diet, says,

There are some alcoholic beverages that are better than others in terms of impact on health.

No alcoholic beverage can improve health, but there are some that can have fewer negative health outcomes than others.”

Important Note: As someone who eats a low carb diet, you’re expected to get drunk faster. Your keto alcohol tolerance decreases. This is because when you’re in a state of ketosis, alcohol gets absorbed quickly.

Meanwhile, non-ketoers, whose glycogen stores are filled, have a higher alcohol tolerance. Think of carbohydrates as a buffer that slows down the rate of alcohol hitting your system.

What is the best alcoholic drink for low carb diet? Pure forms of alcohol such as gin, tequila, and whiskey contain zero carbs. You can drink them by themselves.

If you like, you can also incorporate a sugar-free or low-carb mixer for more flavor. Options include diet soda, sugar-free iced tea, or sugar-free juice 4.

Is wine a keto friendly drink? It depends on the amount of sugar it contains. Ideally, you should go for dry wine options like merlot, pinot noir, and pinot blanc. The drier the wine, the less residual sugar it has.

We’ve saved you time from doing all the research yourself. These are your choices:

To be honest, beer can be a tricky drink on a low-carb diet. That’s because they’re made from barley, wheat, and rice.

as long as they don’t put you over your carbohydrate goal for the day.”

Luckily, there are a few low-carb beer options that are worth adding to our list. See them below.

These drinks may be popular (you may have heard of them) – but sadly, they’re not the best alcohol for keto. As you can see, a small serving can carry as much as 46 grams of carbs. That doesn’t sound so appealing.

So there you have it. You already know how the keto diet and alcohol can work together. To stay within your daily carb limit, only go for zero or low carb alcohol drinks, which we’ve listed above.

You don’t necessarily go out of ketosis if you know what alcohol you can drink on keto. Alcohol with no carbs such as vodka, whiskey, and gin are top choices. There are also low-carb wines and beers.

But just because they’re available, doesn’t mean you should enjoy them more often. As mentioned, alcohol is considered by your body as a toxin. Getting rid of it becomes a priority over burning stored fat – which is the basis for ketosis. Too much alcohol also triggers unhealthy food cravings.

At the end of the day, you still need to drink alcohol in moderation. We hope this guide helped!