Home → Articles → The Keto Diet and ADHD: What Research Says 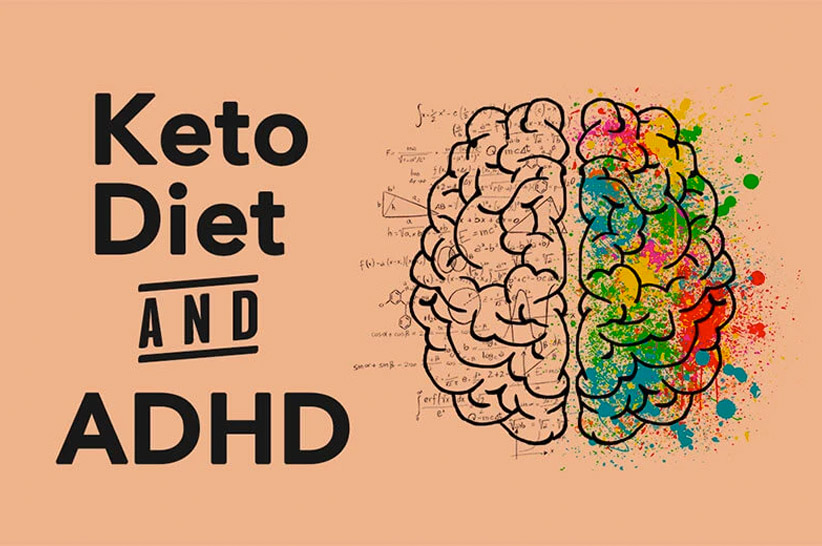 The ketogenic diet has been found to have a positive impact on several neurological conditions. It’s proven to be useful for improving cognitive performance and brain health.

This may have you wondering whether or not the ketogenic diet can help treat attention deficit hyperactivity disorder. Our guide will walk you through what you need to know about keto and ADHD.

Attention deficit hyperactivity disorder (ADHD) is a behavioral disorder that impairs executive functioning, such as the ability to focus, think before acting, and resist temptation. The primary symptoms of ADHD are inattentiveness, hyperactivity, and impulsiveness. Children, teenagers, and adults can have this condition, but the symptoms often begin to show during childhood, between 6-12 years of age 1. To be diagnosed with ADHD a child must show the following symptoms before they turn 12 years old.

Some symptoms of ADHD in children and teenagers include: 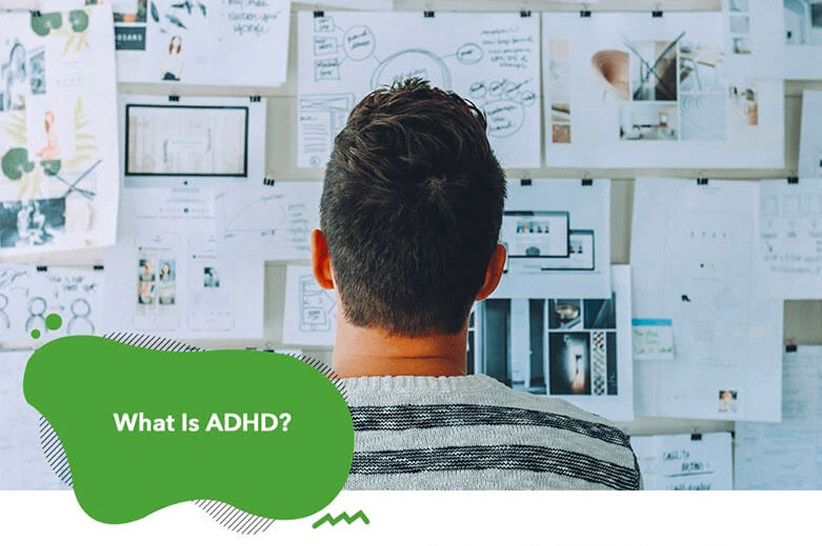 In adults, some significant symptoms such as hyperactivity tend to decrease while inattentiveness may get worse due to the pressures of adult life. Some examples of ADHD symptoms in adults are:

The exact cause of attention deficit hyperactivity disorder is still uncertain; however, a combination of genetic and environmental factors are thought to play a big part 2. Research has shown that those who have ADHD are more likely to have it in their family line. E.g., one or both parents could have it without being diagnosed.

Researchers have also found some notable differences in the brains of people with ADHD compared to those without. One related finding is that some regions of the brain in people with ADHD might be smaller or larger compared to those who don’t have this condition. There is also some evidence stating that there could be an imbalance or poor functioning of neurotransmitters in the brain 3. 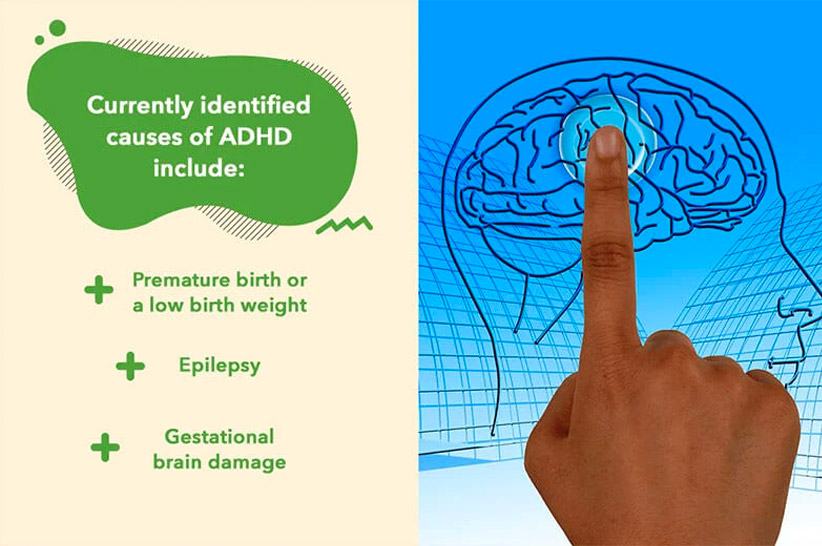 Currently identified causes of ADHD include:

Diagnosis of ADHD involves a series of assessments carried out by your doctor or a specialist practitioner such as a psychiatrist. You will be asked about several things such as your symptoms, where they occur (e.g., home and work), how they impact your day to day activities, childhood history of symptoms, and family history of ADHD. A physical examination will be done to rule out any other medical causes of your symptoms before the official diagnosis of ADHD.

ADHD is often treated with stimulant medications that act on the dopaminergic and noradrenergic pathways. The primary drugs used to treat ADHD are n-methylphenidate (MPH) and dextroamphetamine (D-AMP) 4. Therapy is also recommended with medications for best results. There’s no cure for ADHD, but treatments can help reduce symptoms and improve the quality of life in those who suffer from it. E.g., they may be able to concentrate better at school or work and be less impulsive.

Does the keto diet help with ADHD?

It’s not possible to give a definitive yes or no answer to this question due to the limited research available on this topic. However, here are some possible ways the ketogenic diet may be able to help treat ADHD.

Oligoantigenic diet is a type of elimination diet that aims to find foods that worsen symptoms, and this diet has also been found to help those with ADHD 6. The oligoantigenic diet eliminates irritants from your diet and encourages you to eat only hypoallergenic foods for a few weeks. You’ll then reintroduce other foods (one at a time) back into your diet. If you feel fine after 3-4 days of reintroducing a new food, you can add it to your approved list of foods, and if symptoms get worse after a reintroducing a food item, you’ll add it to the avoid list. 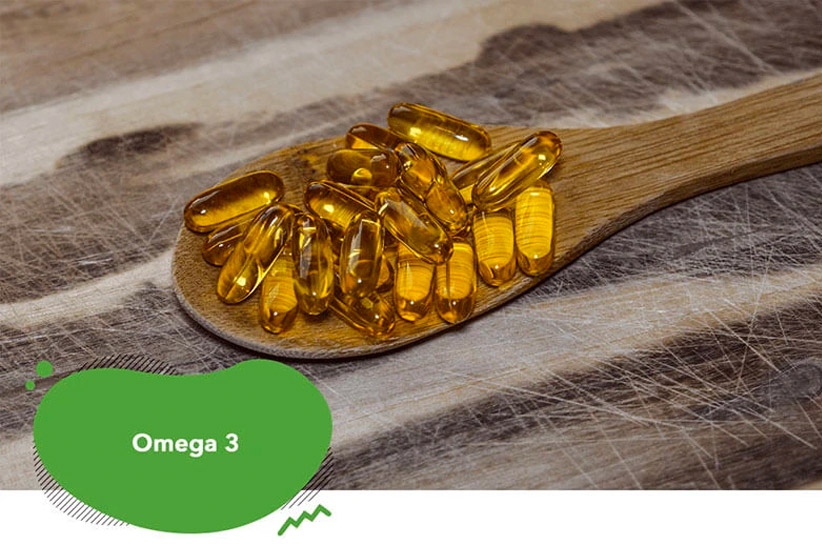 Those who have ADHD are often encouraged to take omega-3 supplements, and the high-fat nature of the ketogenic diet can make it easier to get more omega-3 from foods. E.g. popular omega 3 rich foods such as fatty fish, chia seeds, hemp seeds, walnuts, and flax seeds are all keto-friendly foods.

Epilepsy is often associated with ADHD, those with the condition have a 15% chance of having seizures. The ketogenic diet was initially invented to treat children with epilepsy and has been successful in many cases, such as the case of Charlie Abraham 7.

One study carried out in dogs found that a medium chain triglyceride (MCT) ketogenic diet may help improve ADHD symptoms 8.

Another study conducted in Korean children found that a traditional diet with low consumption of fast foods and beverages was negatively associated with ADHD 9. 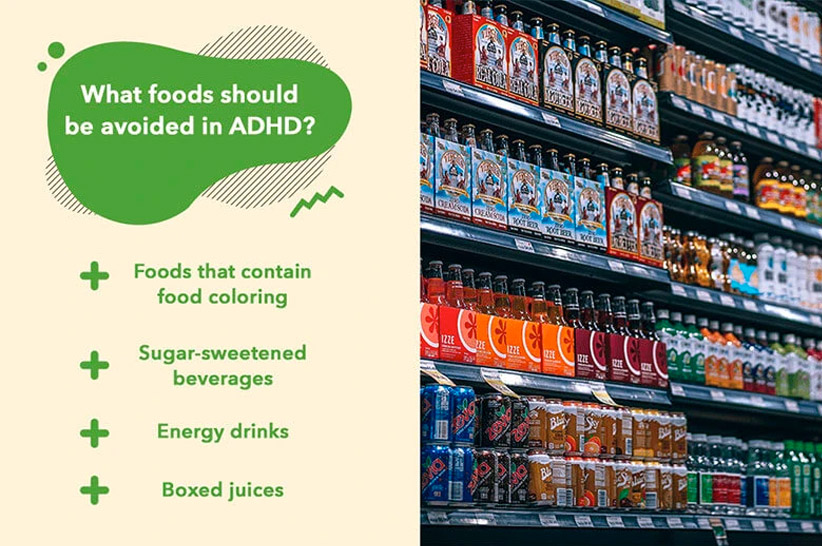 What foods should be avoided in ADHD?

As discussed above, lowering sugar intake, removing additives, and artificial preservatives are encouraged to improve the symptoms of ADHD. With that in mind, here are some foods to avoid in ADHD:

Other Remedies + Keto Diet May Help Manage ADHD Even Better

Here are two other treatments you could try with along with the ketogenic diet to treat ADHD symptoms. 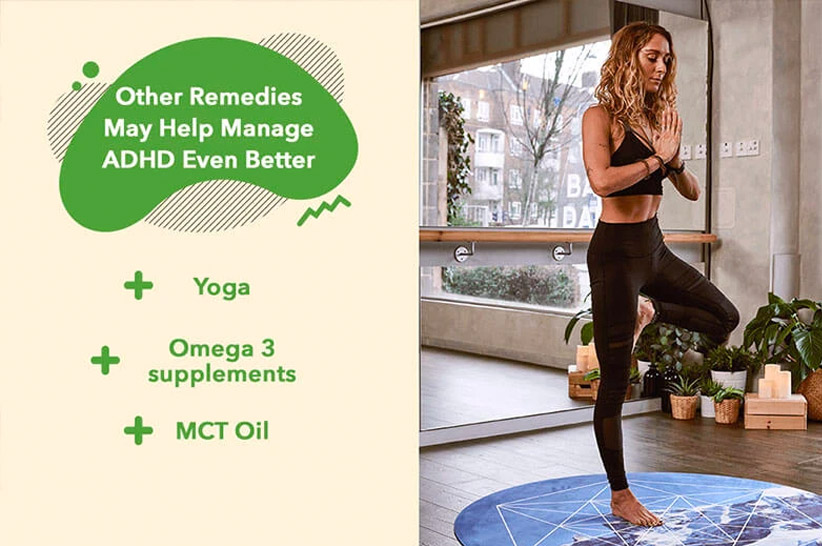 One of the most popular health benefits of yoga is that it can help you focus better and improve mental clarity. One study investigated the effectiveness of yoga on ADHD symptoms in 9 children with moderate to severe ADHD. They were given an average of 8 yoga training sessions during their in-patient stay. Results revealed a significant improvement in ADHD symptoms at the time of discharge 1. Another study has also had similar results 10. 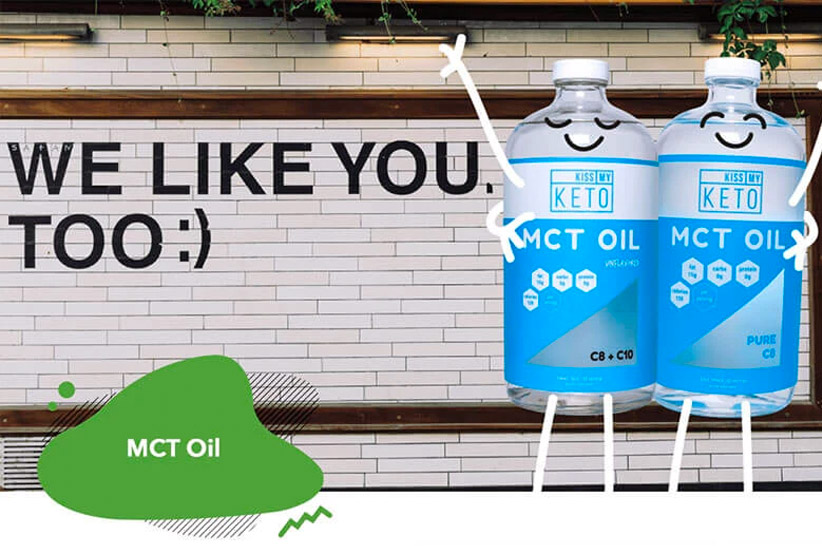 The study we discussed in ref 8 uses medium chain triglyceride (MCT) ketogenic diet. MCT oil has proven health benefits, such as improved energy and cognitive performance. It has also been found to have a positive impact on conditions such as epilepsy, autism, and Alzheimer’s 12. Thus incorporating MCT oil into your diet may help improve the symptoms of ADHD. Please consult with your doctor before doing so and start with a lower dosage of 1-2 tsp per day for a week and then gradually increase to a maximum of 2 tbsp per day. Use pure MCT oil with only capric acid, caprylic acid, or a combination of both for best results.

The direct effect of the ketogenic diet for ADHD currently has little to no evidence. However, some findings suggest that different components of the keto diet may help reduce the symptoms of ADHD. One such finding is that reducing sugar intake may help and the keto diet eliminates regular sugar.