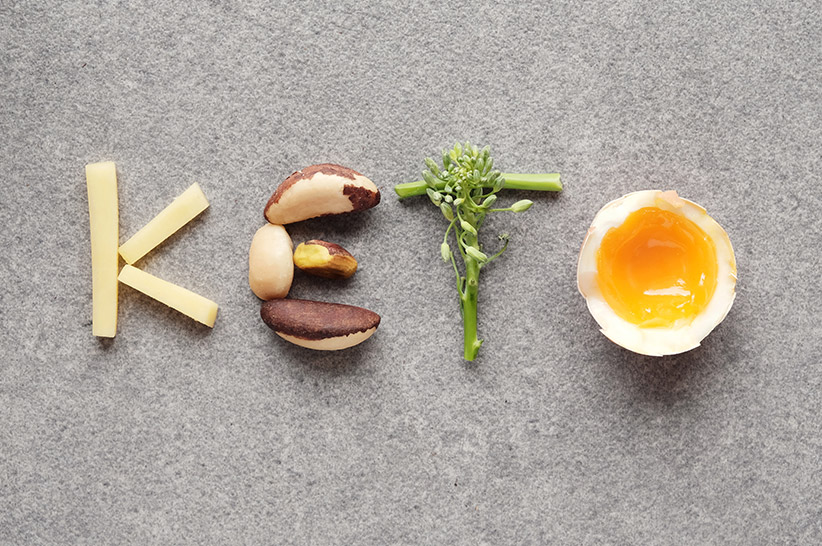 Gallbladder plays an essential role in digesting fats by storing and concentrating excess bile and releasing it at the right time.

Some health conditions such as gallbladder stones may require this organ to be removed from your body, and this may make you wonder if it’s possible to be on keto without a gallbladder. The good news is that it is possible, but it will require some effort from your part to get it right.

IMPORTANT: Please discuss with your doctor first if you’ve had your gallbladder removed and wish to start the ketogenic diet.

What Is a Gallbladder

The gallbladder is a member of the biliary system which is made up of the liver and its huge blood supply, the liver ducts, bile ducts (inside and outside the liver), and the gallbladder. It is called “biliary” because it involves the organs that are responsible for producing and storing bile and releasing it into the small intestines at the right time.

The gallbladder is located under the liver in the upper right section of your abdomen, and it’s about the size of a pear. It is located in the outer part of the biliary system (extrahepatic) and receives bile from the liver through cystic ducts 1.

It’s important first to understand what bile is and its functions because gallbladder revolves around storing and releasing bile.

Bile is a unique watery secretion produced by the liver that plays several significant roles in the healthy functioning of the human body. It’s made up of 95% water with dissolved solid constituents such as bile salts, bilirubin phospholipid, cholesterol, amino acids, and more 2.

Bile is usually produced when you eat food, especially food rich in fats and the production of bile lowers during fasting.

The two primary roles of bile are:

Bile plays a vital role in emulsifying fats and making it easier for digestion. It does this by breaking down large lipid droplets into smaller ones which increases surface area for the digestive enzymes to do their work 3. The average bile flow in humans is approximately 600 mL/day.

If bile is not present, your body will find it harder to digest fats, and thus a lot of it may get excreted via feces. The result will be a fatty stool that looks white or grey and is oily. The absence of bile is called steatorrhea, and this condition can cause fatty acid and fat-soluble vitamin deficiencies.

On top of that, steatorrhea might also create problems in the large intestine because gastrointestinal] tract and gut flora are not adapted to processing fats.

Getting rid of waste products

Bile eliminates excess cholesterol in your body by converting them into bile salts which allows your body to maintain cholesterol homeostasis.

The two primary functions of the gallbladder are:

Excess bile produced by the liver is sent to the gallbladder where it will be stored until the next digestive period. When you eat, the endocrine cells are stimulated to release a hormone called cholecystokinin (CCK). This hormone controls the stimulation of the smooth muscle contraction of the gallbladder while causing the sphincter of Oddi to relax and this allows gallbladder to release the stored bile into the small intestine.

When you’re not eating (think sleeping or fasting for instance), the sphincter of Oddi contracts which prevents the flow of bile into the small intestines. This contraction increases pressure in the bile duct and stimulates the flow of bile into the gallbladder. The bile becomes concentrated when the epithelial cells reabsorb water and electrolytes in the gallbladder.

Gallbladder and Liver: How They Work Together

As discussed above, the gallbladder acts as a support system for the liver to control the release of bile into the small intestine. The liver produces bile which gets transported into the gallbladder through the hepatic and cystic ducts.

When you eat food, cholecystokinin (CCK) hormone stimulates the gallbladder to open and release bile into the duodenum (first part of the small intestine). When you’re not eating, bile is stored in the gallbladder where it gets concentrated and ready to be released upon the next stimulation via food.

Conditions Where the Gallbladder Needs to Be Removed

This is when gallstones form in the gallbladder. The stones can be as small as a grain or as large as a golf ball. Some symptoms of cholelithiasis include sharp pain in the right abdomen, vomiting, and nausea 4.

This condition is when there’s an inflammation in the gallbladder. It is also known as gallbladder infection which is often caused by gallstones described above.

This is when there are stones in the common bile duct which plays an essential role in transporting bile from the liver to the gallbladder 5.

Pancreatitis is the inflammation of the pancreas which is often caused by gallstones 6.

What Happens If My Gallbladder Is Removed?

If your gallbladder has been removed due to conditions such as the ones we’ve discussed above, it means the liver has lost a vital member of the biliary system. The bile produced by the liver now has nowhere to be stored in between meals.

Sensing that the gallbladder is gone, the liver will continue to produce bile but will release it in smaller portions into the small intestine. The problem, however, is that your liver may not always know when to release large amounts of bile and when to release smaller amounts.

It will take some time for the liver to get used to functioning without the help of gallbladder and you may experience some side effects of malabsorption whenever the liver fails to send the right amount of bile to help digest your food. Some of these side effects may include bloating, gas, and diarrhea.

In short: It’s possible to return to your regular diet after having the gallbladder removed, however, you will need to give it a month or more and train your body to adapt to the changes slowly.

Can I Do the Keto Diet Without My Gallbladder?

As discussed earlier, bile is essential for the absorption of fats which is why those who’ve had their gallbladder are often advised to follow a low-fat diet until the body adjusts to living without a gallbladder.

Since the liver may not always send the right amount of bile into the small intestine, this means that if you eat high-fat foods, the fat might not get digested properly and result in malabsorption of fat-soluble vitamins such as Vitamin K and E.

Does That Mean You Cannot Be on Keto Without a Gallbladder?

Fortunately, you can. However, you will need to take baby steps and some precautions until your body becomes used to a high-fat diet. If you rush and start the diet suddenly, you may fall prey for symptoms related to fat malabsorption. 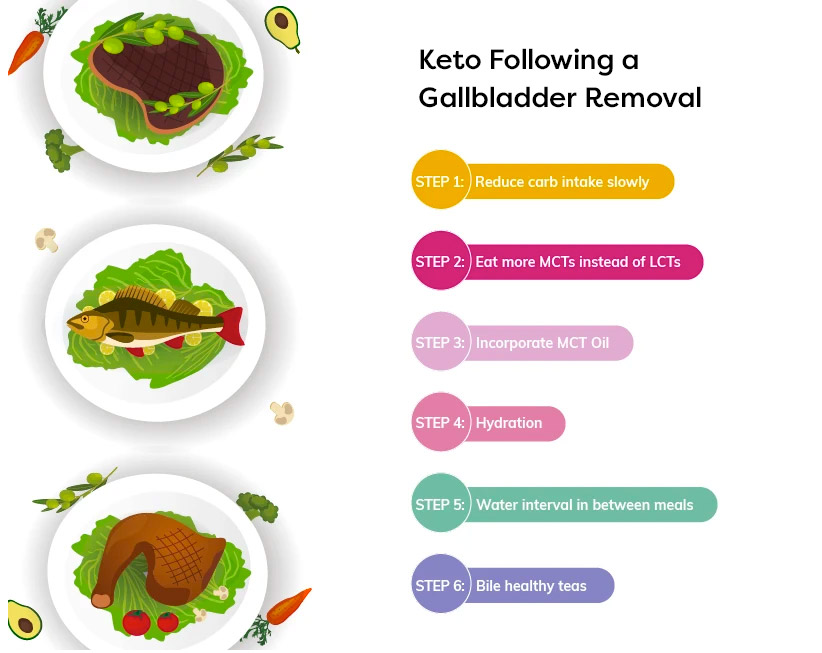 One such symptom is light colored, soft and bulky stools with bad odor. They may also leave greasy marks on the side of the toilet and/or stick to the side. Other significant symptoms include bloating, gas, and diarrhea.

If you want to avoid that, you need to take a slow step by step approach to have a smooth transition into the ketogenic diet.

How to Do a Keto Diet Following A Gallbladder Removal

The keyword here is “slowly.” If you’re currently consuming over 150 grams of carbs per day, you don’t want to suddenly drop it to under 50 grams for the keto diet. Take it slow and work on reducing your carb intake by one meal at a time.

So for example, you could try eating scrambled eggs with a small slice of grass-fed butter instead of eggs and toast for breakfast. You might want to use stevia in your tea and coffee instead of sugar.

Take it slow and reduce your carb intake slowly while simultaneously adding more fat. But remember the key is to reduce the carbs gradually and increase the fats slowly day by day. If you experience any adverse effects during this time, you might want to take a step back and increase your carb intake a little bit to see if that makes a difference.

Medium chain triglycerides, on the other hand, do not require the help of bile to break them down before being digested. Foods rich in MCTs are grass fed butter and coconut oil. You can swap your regular butter for grass-fed butter and also combine coconut oil for cooking.

MCT oil is a supplement that contains the concentrated form of MCTs found in coconut oil. The premium MCT oil is usually made out of capric acid, caprylic acid, or a combination of both. It gets absorbed by the liver quickly to be used as fuel and has been proven to provide many health benefits. One of those benefits is that since MCTs can be converted into ketones, it can make it easier to get into and sustain ketosis when you’re on the ketogenic diet 7.

Caution: The maximum recommended dosage for MCT oil is 2 tbsp per day, but you should start with a much lower dose of about 1 tsp per day for two weeks and then increase the dosage gradually.

The importance of staying hydrated is often ignored or overlooked. Water is essential for the healthy function of liver and bile so make sure you’re drinking plenty of clean water every day. This doesn’t mean you should gulp down a bottle of water in one go. Drink a glass when you wake up and whenever you’re thirsty. Also, drink a glass of water before you go to sleep.

STEP 5: Water interval in between meals

Drinking water right before, during, or right after your meal can dilute the stomach acids that are needed for the healthy digestion of your food. Try not to drink water 30 minutes before and after your meal to avoid this.

You might want to start drinking ginger and dandelion teas because they’re both excellent for the liver and bile. Ginger, for instance, is packed with a lot of medicinal properties such as antioxidants, anti-inflammatory, and promotes healthy digestion. One cup a day is all you need to reap the benefits of ginger tea 8,9.

Although the idea of being on the ketogenic diet might put you off if you’ve had your gallbladder removed, it’s certainly possible if you follow the right steps such as the ones we’ve discussed.

The key is to take a slow baby approach and avoid jumping on the diet on full mode. The slow approach will give your body enough time to get used to the reduced carb intake and increased fat intake so it can safely prepare to run on ketosis.

Please don’t forget to consult your doctor before starting the diet to make sure you’re on the safe side. If you experience any adverse effects, you may want to take a step back and up your carb intake a little again to see if that helps.