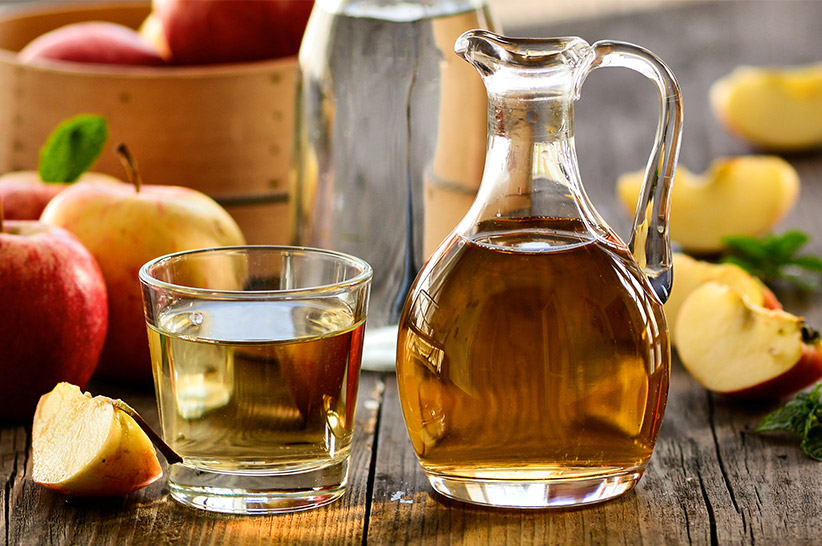 Apple cider vinegar (ACV) is a popular condiment often touted as a miracle food. From curbing appetite and burning fat to reducing cancer risk and preventing diabetes, it may seem like ACV can do it all.

And for those on a ketogenic diet, these exact claims have raised interest in this particular ingredient.

Eager to know if and how ACV can help you on keto? We’ll explore the research behind ACV’s purported health benefits, including the 5 ways it can help your keto diet.

What Is Apple Cider Vinegar?

In short, ACV is vinegar made from fermented apple juice. Making ACV involves a two-step process. First, yeast is added to apple juice, which ferments its sugar producing cider. Next, naturally-occurring bacteria in apples oxidize ethanol from the cider into acetic acid 1.

This process yields a product consisting of 94-95% water and 5-6% acetic acid 2. ACV also contains trace amounts of other acids, such as malic acids, as well as several minerals. Still, ACV is not a major source of fiber or other nutrients. Rather, its health benefits are derived from acids and phytochemicals.

Vinegar has been in use for a long time in human history, possibly even as far back as the Babylonian Period 2. Even way back then, people used it for medical purposes. Hippocrates used it to manage wounds, while Sung Tse (the creator of forensic medicine) suggested washing hands with vinegar to avoid infection during autopsies.

Historical medical writings also show that vinegar was used to treat swelling, poison ivy rash, dry cough, stomachache, and high blood sugar, among many symptoms. Nowadays, ACV is used in cooking and as a home remedy.

How Is It Different from Other Vinegars?

ACV seems to be more popular than other types of vinegars, and most vinegar health claims seem to refer to this particular type of vinegar. Ever wonder why?

Quite simply, ACV’s popularity really has a lot to do with its mild taste and budget-friendly price. Additionally, since most ACV is made through a more natural process than, say, distilled or industrial vinegars, it tends to be a more attractive choice for those looking for a home remedy.

But how does ACV compare to other naturally-fermented vinegars such as rice, balsamic, wine, and sugar cane in terms of health benefits? According to a large review of vinegars, most provide somehealth benefits 3. However, ACV seems to stand out based on its effects on blood glucose, blood lipids, and weight loss (or at least that’s what the studies show).

Yes, ACV is definitely allowed on a keto diet! After all, it is simply a low-carb condiment. One tablespoon provides only 0.1g of carbohydrates along with a small dose of several minerals and phytochemicals.

Another reason to include ACV in your keto diet is for the health benefits. Both the keto diet and ACV have a similar impact on health, such as their favorable effects on blood glucose levels. The acetic acid in ACV has been found to slow the breakdown of starches and provide a more gradual release of blood glucose 4. In fact, a review of clinical trials concluded that adding vinegar to the diet for a period of 8-12 weeks resulted in a small (yet significant) reduction in mean HbA1c, an indicator of long-term glycemic control 4.

In animal studies, ACV was found to help prevent fat storage while upregulating the expression of genes responsible for burning fat 5. However, similar human studies have not been developed, and studies that did examine the effects of vinegar intake on weight in humans were generally of inferior quality 6. Nonetheless, adding ACV to your keto diet may help you get into ketosis and reap the health benefits of low-carb eating.

5 Reasons to Use Apple Cider Vinegar on a Keto Diet

In case you need more convincing, here are 5 reasons to start including more ACV in your weekly keto diet plan: 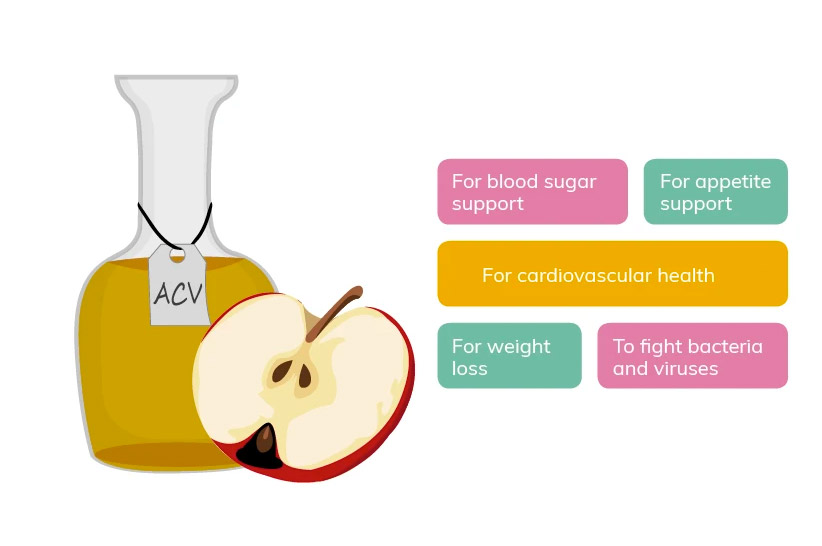 ACV can further boost this effect. Studies show that vinegar intake can reduce blood glucose levels and the resulting insulin response after meals 7. This effect seems to be attributed largely to acetic acid, as it slows down digestion. However, acetic acid also seems to slow down glucose production in the fasted state 8.

One study involving 12 diabetic patients compared vinegar to placebo in their effects on blood glucose uptake in the muscles 8. This study found that vinegar increased glucose uptake compared to placebo, possibly suggesting that vinegar may improve insulin sensitivity. However, more research is needed to know if vinegar really is a miracle ingredient when it comes to glucose metabolism and blood sugar management, or if this was simply good luck 4.

Kourtney Kardashian swears by ACV in helping her curb hunger while intermittent fasting. Since ACV slows down digestion; leads to a more favorable release of blood glucose, and improves overall blood glucose levels, it makes sense that it might also help control appetite.

Appetite hormones are partially mediated by insulin and blood glucose levels. They are also controlled by the speed of digestion. However, a study in normal-weight and healthy subjects found that ACV could reduce appetite simply by making people nauseous 9.

As we already learned, vinegar upregulates fat oxidation in mice. A similar study in human liver cells found that acetic acid from pomegranate vinegar had a similar effect 10. Although this sounds promising, the evidence is not strong enough to say for sure that consuming ACV will automatically put you into fat-burning mode.

Regardless, the promise is there, and consuming ACV on a keto diet certainly won’t hinder your progress. It may even help curb your appetite and offer additional blood glucose support, both of which are important for weight loss and appetite control.

The biggest drivers of cardiovascular diseases (such as coronary heart disease and atherosclerosis) are elevated levels of LDL cholesterol, triglycerides, and inflammation.

According to one mouse study, ACV can fight all three of these for improved cardiovascular health 11.This study compared the effects of pure acetic acid to vinegar, and concluded that both helped to reduce hunger and weight. However, it found that only vinegar reduced blood lipids and inflammation. This means that compounds other than acetic acid in vinegar must be responsible for these effects, and those compounds are most likely polyphenols. Polyphenols are plant compounds that are not nutrients but exert anti-inflammatory and antioxidant actions.

5. To fight bacteria and viruses

Because ACV is acidic, it can kill bacteria, fungi, and possibly even viruses. Acids disrupt the membranes of these microorganisms, as do highly alkaline compounds. However, researchers believe that this could partially be attributed to the polyphenols in ACV 12.

Studies have found that ACV can be effective against E. coli, S. aureus, Candida, and even the bacteria that causes tuberculosis 13. One study even found that cleaning surfaces with malt vinegar completely destroyed the flu virus 14. ACV could likely do the same, but we suggest using plain white or malt vinegar for this purpose and saving ACV for cooking purposes.

Ways to Use Apple Cider Vinegar on Keto

If you’re not used to using ACV and need ideas on how to incorporate it into your new diet, here are some popular keto-friendly uses for ACV:

Some people like to add a spoonful of ACV to a glass of water in the morning. While we can’t guarantee it will “detox” your system (your liver and kidneys do that on their own just fine!), it may help to stimulate digestion. For a more interesting taste, you can add other flavorful antioxidant-rich ingredients such as cinnamon, ginger, turmeric, or lemon juice.

Add it to salad dressings

ACV has a mild and sweet taste that goes well with many salad dressings, including vinaigrettes, yogurt-based dressings, and Caesar. The unfiltered variety of ACV that contains the “mother” has a more complex taste that you’ll likely find alluring.

Use it for marinades

Marinating chicken and fish with acidic ingredients not only brings out the flavors but also tenderizes the meat. ACV can be a good lemon juice substitute for seafood marinades, and it’s an especially good keto lemon substitute with fewer carbs.

Add it to stir-fries

Sweet-and-sour sauces usually include vinegar as an ingredient. You can substitute rice vinegar with ACV in these recipes.

ACV is acidic, and acidic ingredients can damage tooth enamel and upset your stomach if you consume too much. A couple of tablespoons a day shouldn’t be a problem, but consistently going overboard certainly will cause issues. There’s even one reported case of a woman who developed hypokalemia (low blood potassium) and osteoporosis after taking over a glass of ACV daily for 6 years 15. However, if you stick to a reasonable amount of ACV, you don’t need to worry about side effects such as this.

Apple cider vinegar is made through wild fermentation and fermentation with yeast. Although most brands of ACV are filtered and pasteurized, some are raw and unfiltered. Raw and unfiltered varieties are cloudier and may develop what is known as the “mother,” which is a colony of acetic acid bacteria and yeast. This structure is completely harmless, and some even believe it has health benefits.

Which ACV type you should go for — raw or filtered — is up to you. Some studies show that the “mother” contains beneficial compounds that may further boost ACV’s health effects 16. Below are a few organic ACV brands to consider:

Adding ACV to your keto diet can help with blood glucose support, hunger, and fat burning. There’s also evidence ACV has an overall positive impact on health, preventing chronic diseases and infections. While more studies are certainly needed to know to what extent this is true, adding ACV to your keto diet shouldn’t cause any harm, especially if you keep your intake moderate.

While all ACV can provide the health benefits of acetic acid, organic ACV with the “mother culture” may contain more bioactive compounds that provide antioxidant and anti-inflammatory benefits. ACV may also help you get into ketosis quicker and easier because it does lead to a better blood glucose response. However, these effects are likely only mild, so don’t rely solely on ACV for these benefits.

I can’t afford the sipping cost or the meals