Home → Articles → Love Syrup? Here Are 7 Best Syrups That Don’t Kick You Out of Ketosis 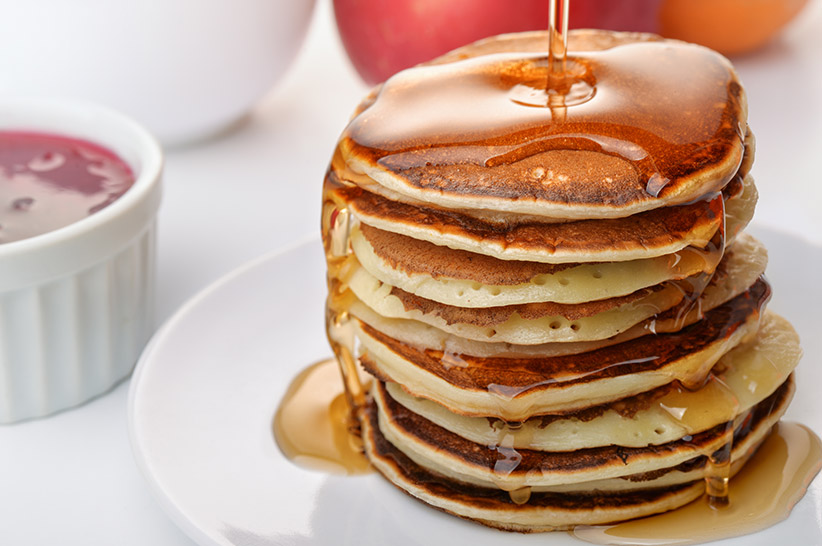 The thought of drizzling some maple syrup on your low carb pancakes might make you feel anxious about getting kicked out of ketosis.

Fortunately, there are some delicious keto friendly versions available, and we’re going to walk you through 7 best keto syrups you should try on the keto diet.

What Is Keto Syrup?

Anything that has the word “keto” in front of it has to be low carb and sugar-free, and it’s the same case with syrups. Syrups are usually made out of two main ingredients: water and sugar. However, a keto syrup, on the other hand, is like the mock version of regular syrup. It has no sugar, well at least not the regular sugar. Keto syrup is made out of low carb ingredients.

The higher sugar content of the regular syrup is what differentiates it from a keto syrup.

Unlike regular syrups, keto syrups are low carb because they’re made with keto friendly sweeteners such as erythritol and stevia.  For instance, the first keto maple syrup recipe we’ve included below has zero carbs because it uses erythritol as the alternative for sugar.

How to Choose a Syrup for Keto Diet?

In general, your chances of getting kicked out of ketosis are higher if and when you eat more than 20-30 grams of carbs per day. Although most keto friendly foods are low in carb, some of them have a significant amount of carbs to meet your daily macros easily. For example, 100 grams of boiled broccoli has about 7 grams of carbs. It gets even easier to reach your daily carb limit if you happen to have two or more meals per day.

So the bottom line is to choose a keto syrup that has almost zero carbs. You should take note of the other ingredients in your chosen syrup recipe and avoid anything that you know your body doesn’t like. For instance, you may want to avoid peanut butter syrup if you’re allergic to peanuts. Similarly, you might want to avoid syrups that contain sweeteners you don’t like.

It’s not that appealing to imagine eating low carb pancakes without drizzling some delicious maple syrup all over it. Well, this sugar-free version is “close to the real thing” according to the recipe author, Maya. This recipe yields 8 (2 tbsp) servings.

Here is the estimated cost of this maple syrup recipe from Amazon:

It can cost anywhere between $20-30 to buy the ingredients for this keto syrup recipe if you don’t already have them. The good news, however, is that you will only be using them in small quantities which means they’ll last longer.

Chocolate is another thing that most people on low carb diets miss the most. Fortunately, there are many low carb chocolate recipes like this delicious sugar-free chocolate syrup by Lindsey.

Assuming you’ll be buying them in small quantities, this recipe ingredients can cost anywhere between $30-40. If you’ve already been on the keto diet for some time, chances are you already have some or most of these ingredients such as cocoa powder and erythritol which will reduce the overall cost. You can also try this recipe using keto chocolates instead of cocoa powder.

Blueberry syrup makes an excellent topping for pancakes, ice creams, and any desserts, here’s a tasty low carb version by Lisa. You can make this keto blueberry syrup in under 25 minutes, and it yields ten servings.

This mouthwatering strawberry syrup by Jessica is made with all natural stevia. It’s a great topping for pancakes, ice creams, and all kinds of keto desserts.

Author Jessica states that this vanilla bean syrup has all the flavor of real vanilla bean, but without the high fructose corn syrup, and other additives. It’s versatile and can be used to flavor anything from plain greek yogurt to your keto smoothies, shakes, and ice creams.

How can this list of keto syrups be complete without a low carb caramel syrup recipe? Here’s an authentic recipe by Paula that uses no thickening agents. You can make it in under 15 minutes, and it yields 16 tbsp servings.

A unique tasting low carb ginger syrup recipe by Melissa. It’s incredibly versatile and can be used on anything from tea and coffee to cakes and desserts.

Bonus: How to Use Keto Syrups in Your Keto Diet

All of the seven keto syrups we’ve discussed can be drizzled on low carb pancakes and other keto desserts such as keto ice creams.

The vanilla, caramel, and ginger syrups would taste great in your keto coffee and tea.

Brush some on your meat and fish before baking.

Add some of your favorite keto syrup to your keto smoothies and shakes.

A keto syrup is similar in taste to the regular sugar syrups with a big difference: keto syrups are low carb, and most of them have almost zero carbs per serving so they will not kick you out of ketosis.

Some low carb sweeteners such as erythritol can cause adverse effects such as diarrhea, bloating, and gas in some people so you may want to avoid it if you have a sensitive stomach.