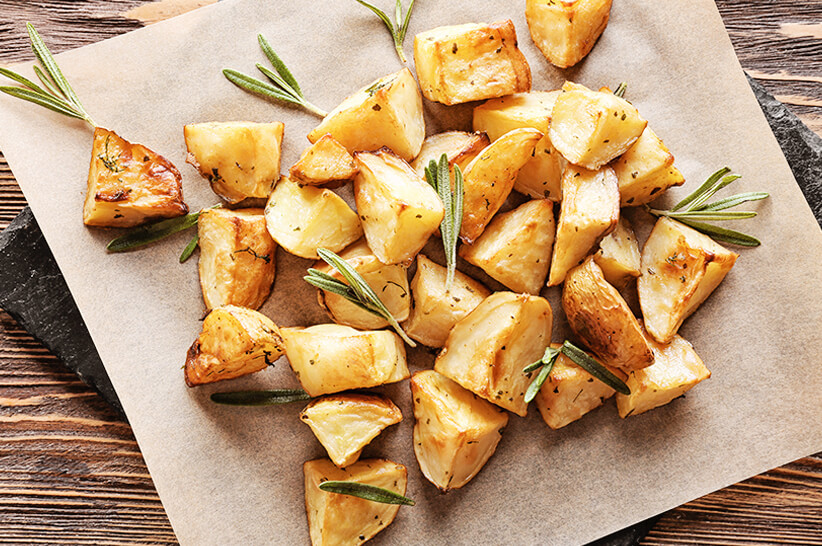 Potatoes are a starchy staple, which means they’re a high-carb food. But just how carby are potatoes exactly? 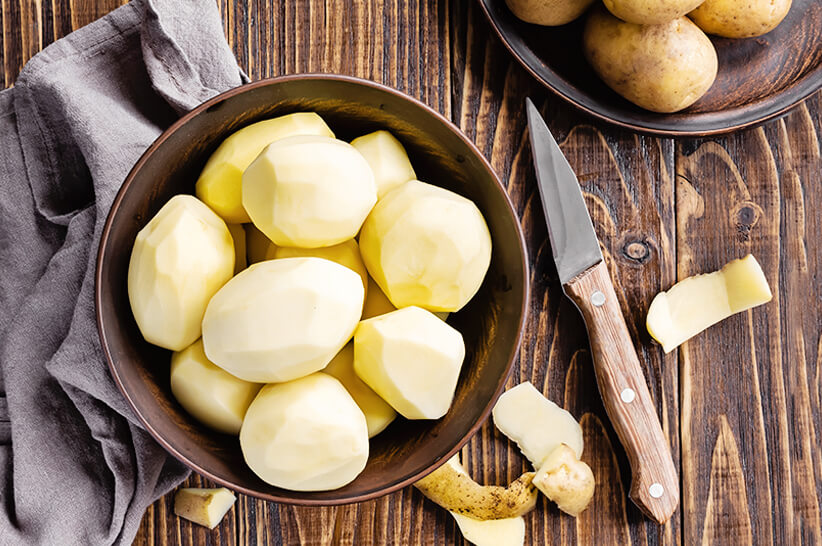 There are roughly 38 g of carbohydrates in one medium (2-3 inch) baked russet potato, which come mostly in the form of complex starches. While complex carbs are certainly better for sustained energy than simple carbs, the human body digests starches quickly, possibly leading to blood glucose spikes. Their high carb content and strong impact on blood sugar mean that potatoes are not the best choice when following a keto diet.

To learn more about the carb content of potatoes, read our overview below. We also talk about what other nutrients there are in potatoes and how you can substitute potatoes on a low-carb diet.

How Many Carbs Are in a Potato?

One medium (173g) baked russet potato provides almost 40g of carbohydrates, of which 34g are net carbs and 4g are fiber 1. A large potato will provide double that amount. While there are many different potato cultivars, most are equally high in carbohydrates.

Most of the carbs in potato are in the form of complex starch. Fresh potatoes contain 20% dry matter, of which 60-80% is starch 2. Furthermore, most of the starch in potatoes is amylopectin, an easy-to-digest starch. Besides digestible starch, potatoes also contain small amounts of indigestible starches, aka fiber.

Complex carbs are generally considered better than simple carbs when you consider the difference in how they impact blood sugar. However, the human body is quite efficient at digesting starches from potatoes, and these starches will still impact blood glucose significantly. That’s because starches are 100% composed of glucose, a simple carb. Research shows that blood glucose concentration and insulin response with other types of sugars, such as lactose and sucrose (table sugar), is 50-60% that of glucose. 3.

How many calories are in a potato?

Potatoes are not a high-calorie food on their own. A medium baked potato, for example, provides only 164 calories. However, most people eat more than one medium potato in a single sitting. Besides that, since potatoes are neutral tasting and dry, they’re typically prepared with fat (butter, oil, lard) and other ingredients (bacon, sour cream, cheese, vegetables, etc).

Most of the calories from potatoes come from carbohydrates. More specifically, 91% of calories in potatoes are from carbs, 1.2% from fat, and 7.4% from protein. This makes potatoes a high-carb food.

Other nutrients in potatoes 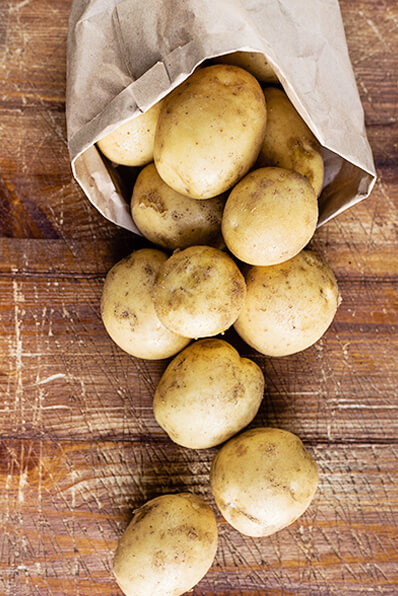 Can You Eat Potatoes on a Keto Diet?

In a nutshell, you should not eat potatoes on a keto diet.

Keto is a low-carb diet in which carb intake is typically limited to 20-50g per day, so one medium potato will get you dangerously close to this daily carb allotment.

The problem with eating potatoes on keto is that one medium potato will not provide enough fiber, vitamins, and minerals, while putting you over your carb limit. That’s why it is recommended to eat low-carb vegetables like broccoli, asparagus, and cauliflower instead – these won’t put you over your carb limit even at larger serving sizes while providing plenty of micronutrients.

There are a few exceptions, however:

This keto diet variation involves following a standard keto approach for 5-6 days of the week and doing carb refeeds for the remaining 1-2 days. During carb refeed days, dieters can eat up to 300g of carbohydrates, so potatoes can definitely be included on the menu.

On a targeted keto diet, you target your carb intake around workouts. Typically, dieters will eat quick-digesting carbs an hour before or after their workouts. Potatoes are quickly digested, so they can be included on days when you plan to follow this dietary approach.

Suggested reading: How Many Carbs for Ketosis?

Potatoes are a staple food across the globe, so many recipes were developed to include potatoes as a side and main dish. If you’re missing potatoes since starting a keto diet, there are low-carb substitutes you can add to your keto meal plan: 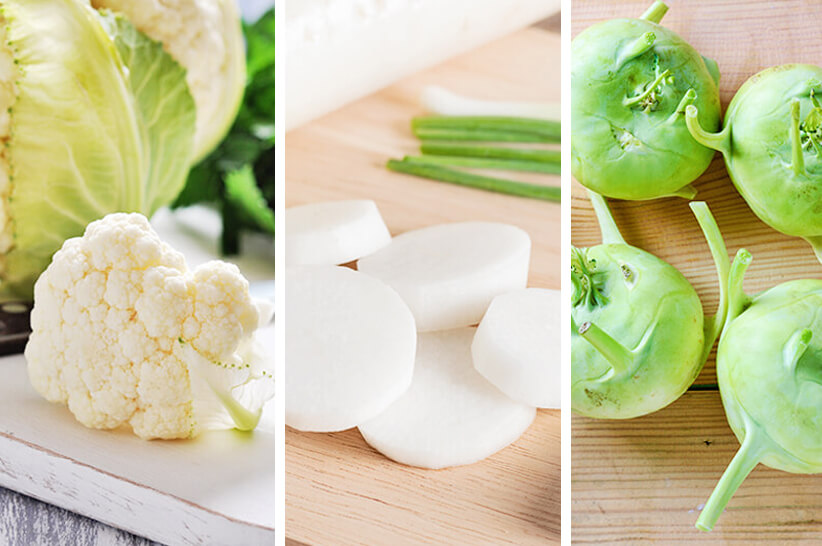 Cauliflower is a low-carb keto vegetable providing only 3.2g of net carbs in a cup of raw produce 9. It’s neutral taste and versatility of cooking make it an ideal substitute for many ingredients, potatoes included. You can roast cauliflower florets where a recipe calls for oven-roasted potatoes as a side dish. You can also make cauliflower mash instead of mashed potatoes.

At only 2.6g net carbs in a 100g serving, you can definitely use kohlrabi in place of potatoes on keto 10. Also called German turnip, kohlrabi is actually a variety of wild cabbage. The kohlrabi stem can be eaten raw, roasted, pan-fried, or boiled. The taste is similar to that of broccoli stems.